Carlton captain Marc Murphy says the lure of premiership success at another club was a genuine consideration before he re-signed with the Blues for another two seasons.

Murphy confirmed on Monday that he has committed to Carlton until the end of 2020 and told coach Brendon Bolton early last week, but didn’t want to take away from the build up to Kade Simpson’s 300th game.

There had been increased speculation about Murphy’s future, with several reports indicating that both Melbourne and Geelong were interested in acquiring his services, if he had chosen to leave Carlton.

While adamant that he had never spoken to other clubs, the skipper admitted on Monday that a lot went into his decision, particularly when it came to chasing a premiership.

“You’ve got to think about that, that’s the reason you play football is to ultimately try to play in a premiership,” Murphy said.

“But the thinking behind it was; I’ve spent 13 years here, would it be a hollow feeling going somewhere else and doing that, or was I keen to stick it out here and try to build something and be part of something special here? 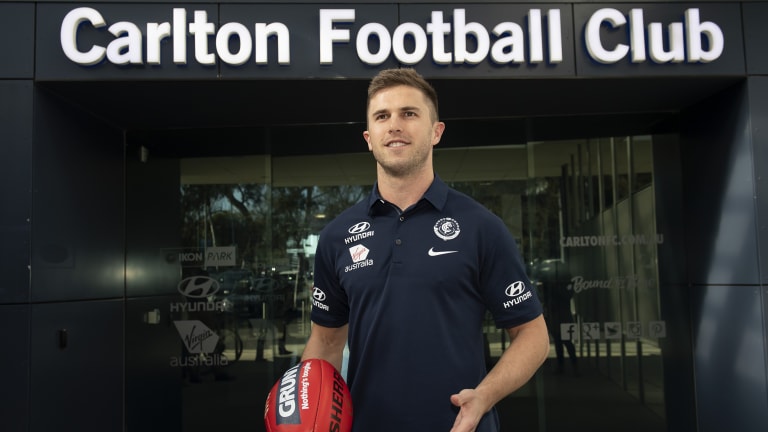 Marc Murphy confirmed he will stay at Carlton on Monday.

“And I think we’re certainly building a list that can ultimately get to that stage and hopefully that’s pretty soon because obviously I don’t have a lot of time left in the game.”

Newman played 268 games for the Tigers, including three consecutive elimination final losses in 2013, 2014 and 2015 before retiring.

“He finished and they go on and win one a couple of years later. But there’s no doubt that he had an influence on the way their culture is and that’s something that I thought was more important,” Murphy said.

Murphy has played just five games this season and only two since round three after being cruelled by a foot injury.

He described the double joy of re-signing and returning from injury in the same week as a “weight off my shoulders” and is confident his injury troubles are behind him for the remainder of the season.

The captain described the current season for the Blues – who have a win-loss record of 1-13 for the first time in the club’s history – as the “perfect storm” when it came to key injuries coming off the back of Bryce Gibbs leaving for Adelaide.

But Murphy is confident that there is light at the end of the tunnel for his young side, and says that there is much more talent at Carlton beyond Patrick Cripps and Charlie Curnow.

“I spoke about Marchbank earlier, Petrevski-Seton, Fisher, Dow, Williamson, Pickett, if you get some more senior guys around them it helps. It’s easier to play football when you’ve got some more experience out there that can direct and organise.

“It’s an important eight weeks for us to try to build that cohesion within the group.”

If Murphy, who turns 31 later this month, plays the remaining eight games of the season, it means he’ll play his 250th game in round one next year, likely to be the now regular season opener against Richmond.