Andy Murray rolled back the year on Monday by scoring his first tour victory in 350 days. And what a scalp it was, as Murray took down triple grand-slam champion Stan Wawrinka in straight sets. 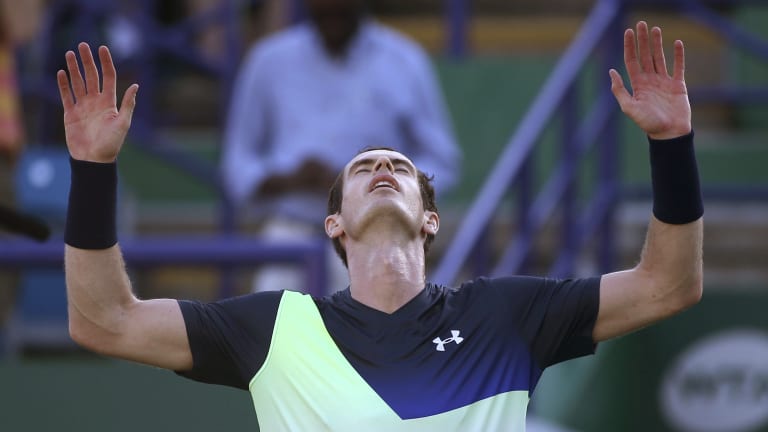 On the evidence of this performance − which earns Murray an intriguing second-round meeting with the new British No.1 Kyle Edmund − you might think that his presence at Wimbledon in a week's time would be a given.

But while the quality of Murray's tennis is more than up to the task, his physical state remains fragile. He came on to the court with the familiar limp that we saw throughout last year's grass-court season, and it seemed to grow more exaggerated on the rare occasions when Wawrinka sustained a lengthy rally.

"I'm not going to decide until nearer the time," was Murray's answer on the subject of Wimbledon. "I need to see how my body pulls up after a match − I'll hopefully play at least two matches this week.

"Obviously the shorter matches are better at this stage. I only started practising two weeks before Queen's. I've hardly played much tennis at all.

"When I was practising it was 90 minutes maximum, so when I played 2hr 39min [against Nick Kyrgios last Tuesday] it made it tough and I was sore the next day.

"So hopefully I pull up better tomorrow after having had that experience last week and a slightly quicker match today."

A few years ago, it would have been unthinkable for two such big beasts to do battle in the relative backwater of Eastbourne.

But here they were, scrambling for purchase as they look to climb back towards the world's top 100. At the end of Murray's 6-1, 6-3 victory, he was the man with the better foothold.

After 342 days away from the court, Murray had produced some unexpectedly slick tennis at Queen's last week to give Kyrgios a stern examination, yet his body struggled in the later stages of that tussle. This was a quicker, cleaner kill. Murray broke the Wawrinka serve twice in each set, while never giving up his own as he surged to victory in 1hr 17min.

This win was based not on screaming forehands and blitzing serves, but on tactical mastery. Eastbourne's centre court resembled the perfect checkerboard, with its neat mowed stripes, and Murray controlled it so intelligently that he could have been playing chess. He used his slice to fend off Wawrinka's ballistic groundstrokes and came to the net regularly, volleying with exquisite touch.

Afterwards, Murray acknowledged that this was a tactical shift designed to take some pressure off his creaking body.

"Coming back at this stage," he said, "I'm going to keep some points shorter if I can, use the serve and volley, come forward when I have the chance. That was something I used to do when I was younger and then, as I got older, my game style changed."

The unforced-error count climbed quickly on the far side of the net as Wawrinka tried to apply his extra muscle. But the geometry of grass-court tennis, in which the ball rarely climbs above knee height, is unsympathetic to his heavy-hitting game.

"For me today it was a tough match, tough to find my game," said Wawrinka. "If you think too much about what you are doing in the practice or too much about the way you're playing or what to do, then for sure you get some hesitation. That's what happened today."

This is still an exploratory period for Murray and he has played two slightly unconventional matches to date. Kyrgios is always a confusing opponent, moving as he does from intense focus to lackadaisical clowning and back again.

Wawrinka is still not quite comfortable in his own decision-making or movement, having played only 14 matches since last year's Wimbledon. The only time the match became close was in the penultimate game, as Murray saved four break points but coughed up almost as many unforced errors as he had in the rest of the match put together.

Even for the double Wimbledon champion, the prospect of winning an opening-round match at this ATP 250 event now feels like a major deal, and Murray admitted afterwards that he was "a bit nervous towards the end". But a Wawrinka double-fault on match point helped him over the line, and he will have a day off today to recover.