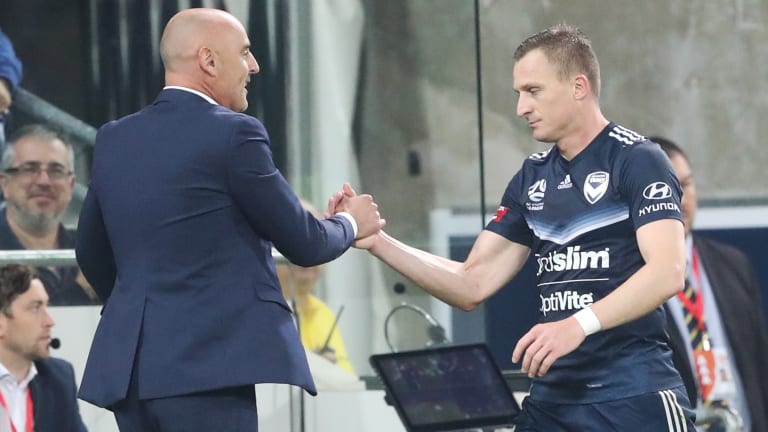 Strike force: Coach Kevin Muscat congratulates Besart Berisha for scoring the stunning late winner that sent Victory through to a semi-final clash against the Sky Blues.

Melbourne Victory coach Kevin Muscat paid tribute to the serial winner, Besart Berisha, for delivering a last-gasp winner in spectacular style to send his team into a semi final showdown with Sydney FC next Saturday night.

Victory has not beaten Sydney for more than two years, so the task they are facing in next weekend's semi is a daunting one now that they have seen off the challenge of Adelaide United.

But with a player like Berisha in the side – someone who can pull something out of nothing even if he is having a night to forget, as he did against the Reds on Sunday – Muscat believes that his team will always have a chance.

While he has withdrawn Berisha towards the end of recent matches and replaced him with Kenny Athiu, this time, he said, he was confident that the players out on the pitch could still find a way to win before extra time.

''We were preparing all the subs. It looked like it was heading to the last few moments of the game. I really had a strong belief that the players out there would carve out an opportunity. ''It was probably the most difficult chance he had had in a long time … it was an unbelievable finish.

''He's a proven winner. I am really pleased for him, he puts in a hell of a lot of effort and we have now got to the point where we have Kenny who can contribute and influence a game also. When he came on he was outstanding. He has developed into a reliable footballer.''