My Nordic Hero booked himself a spot in the Villiers Stakes as Chris Waller enjoyed another day out on his home turf.

After wins for Exoteric and Mazaz triumphed at Rosehill, grey stablemate My Nordic Hero ($3.70) came home late to win the group 3 Festival Stakes (1500m), half a length in front of the well-tried Goodfella ($6.50), with a further three-quarters to Victorian visitor Chamois Road ($13).

Waller said he may have got it wrong with My Nordic Hero last preparation after such a lengthy lay-off, but he could not have been more impressive with his two runs to date. 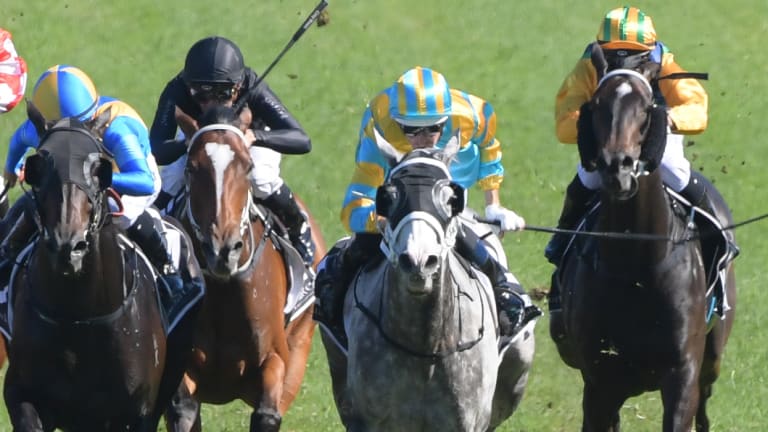 Happy days: My Nordic Hero, with Hugh Bowman in the saddle, wins the Festival Stakes.Credit:AAP

The seven-year-old  is likely to be joined in the Villiers by Waller runners Torgersen and Sambro  and will relish the step up to the Randwick mile.

"He'd been off the scene for so long," Waller said of My Nordic Hero's previous preparation. "It had been a couple of years before we raced him. We naturally stepped him up in distance when he was not winning but still running good races,'' Waller said.

"This prep his first-up run was terrific. That's when we thought we'd keep him fresh and run him today.

"The mile will suit. Certainly not our topliners will be in  the Villiers but it's a good race for those types of horses.''

Waller was unsure if My Nordic Hero was a miler or stayer but plans to tackle the Summer Cup over 2000m should nothing go amiss in the Villiers.

Bjorn Baker's Goodfella made his move at the 600m and did well to cling to second and is sure to enjoy a drop in weight for the Villiers.

Waller's Exoteric won the listed ATC Cup (2000m), but most punters were busy watching highly fancied stablemate Savacool being eased out of the race. The last-start Flemington winner was later found to have suffered cardiac arrhythmia.

As for Exoteric, Waller said: "He's probably the most improved horse in the stable at the moment.

"We took him to Port Macquarie and got some confidence up there. You might say, 'it's the Port Macquarie Cup', but it's a $150,000 race and equal to today's race, if not similar. He's won since then. We gave him a freshen-up and aimed him at this race and the Christmas Cup in two weeks. It's worked out well.''

Meanwhile, Gai Waterhouse was holidaying in New York but would have loved the gritty all-the-way win by Invincible Star in the listed Starlight Stakes (1100m).

The only horse to lead and win at Rosehill, Invincible Star was returning from a failed attempt in group 1 company during the Melbourne Cup carnival.

"We'll look to see if she needs another couple of runs before Queensland," co-trainer Adrian Bott said of Invincible Star. "There's most likely the [$1 million] sprint race up there.

"I think there's still improvement there. I thought we were in trouble. She had to do it tough and against the pattern of today. She was there to be beaten. They challenged her. She could have folded at any point inside the last furlong, but she fought on well and it was satisfying to see that.

"She's told us every step of the way she's in good form and shape, so in our minds there was never a reason to hold back. We've looked after her throughout.''

Such were the raps on Invincible Star that the stable briefly toyed with trying to get her into the Everest mix.

"Timing is everything and it might not have been the right race for her at the time. Now we've got a horse to push on to the Magic Millions with, and that's what we'll target,'' Bott said.