With all of the trade drama surrounding Anthony Davis and Kristaps Porzingis, the N.B.A. intruded on the N.F.L.’s run-up to the Super Bowl as we have not seen since Kobe Bryant scored 81 points on football’s so-called Championship Sunday in 2006.

Now that the Super Bowl is over and even more of North America’s sporting consciousness is there to be seized by professional basketball’s tireless headline-makers, here is our best advice: Buckle up.

What follows is a by-the-numbers look at what the N.B.A.’s 73rd season has served up so far — and what the next five months hold.

Through Sunday’s games, only the Milwaukee Bucks were on a 60-win pace. The Bucks’ Eastern Conference-leading record of 38-13 projects to a 61-win campaign — which could keep this season from being the league’s first since 2000-1 without a 60-win club.

There are realistically 11 teams battling for the Western Conference’s eight playoff spots, after the new calendar year began with 14 teams in the conference — all but Phoenix — in the race. Dallas, New Orleans and Memphis have dropped off in January, prompting all three teams to focus more on trades than the standings.

The consensus top three in the Most Valuable Player Award race coming out of Super Bowl weekend are Milwaukee’s Giannis Antetokounmpo, Houston’s James Harden and Denver’s Nikola Jokic. According to the Basketball-Reference.com M.V.P. Award Tracker, Antetokounmpo awoke Sunday with a 37.8 percent chance of winning — far ahead of Harden’s 21.1 percent. 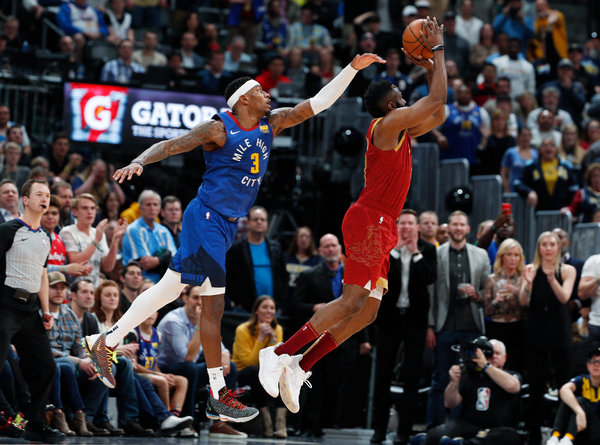 Harden has scored at least 30 points in 26 consecutive games, good for the third-longest such streak in N.B.A. annals behind Wilt Chamberlain’s streaks of 65 and 31.

The league’s trade deadline (Thursday at 3 p.m. Eastern) is three days away. This is the second season since 1978-79 (as far back as reliable N.B.A. record-keeping goes) that the deadline falls before the All-Star Game.

The New Orleans Pelicans have made two trips to the playoffs — winning only one series — in Davis’s first six seasons with the team. Davis requested a trade on Jan. 28.

Minnesota is 21-18 since the trade that sent Butler and Justin Patton to Philadelphia on Nov. 12 — and 6-6 since firing Tom Thibodeau, the coach/team president who made it, on Jan. 6. Ryan Saunders, Thibodeau’s 32-year-old replacement, has many admirers around the league, but the Wolves are a long way from convincing skeptics that the deal (to bring in Robert Covington, Dario Saric, Jerryd Bayless and a 2022 second-round pick) was sufficient for a player of Butler’s caliber.

Thibodeau is one of three coaches to be fired this season — after nine coaching changes in the off-season. The other coaches to lose their jobs since opening night: Cleveland’s Tyronn Lue and Chicago’s Fred Hoiberg.

There were 20 teams, entering Sunday’s play, attempting at least 30 3-pointers a game. This is poised to become the first season in N.B.A. history that the leaguewide average per game (31.4) will finish in the 30s.

With coaches calling for more 3-pointers than ever before and greenlighting shots earlier and earlier in the 24-second shot clock — along with a new rule that resets the shot clock at 14 seconds on offensive rebounds — teams are averaging 100.0 possessions per 48 minutes leaguewide. The last N.B.A. season in which that figure finished in triple digits was 1988-89 (100.6).

Milwaukee’s Khris Middleton, Orlando’s Nikola Vucevic, Philadelphia’s Simmons and Denver’s Jokic are the four who will make their All-Star Game debuts Feb. 17 in Charlotte, N.C. The All-Star player draft, in which the captains LeBron James and Antetokounmpo will fill out 13-man rosters by picking players playground-style, is Thursday at 7 p.m. — just four hours after the trade deadline passes.

Four teams are in contention for the league’s worst record: Phoenix (11-43), Cleveland (11-42), Chicago (12-41) and, of course, the Knicks (10-42). The teams that finish in the bottom three will share a 14 percent chance of landing the No. 1 overall pick in the draft in June in the first year of the league’s revised lottery system.

San Antonio sits a surprising fifth in the West, at 32-22, in its first season since trading Kawhi Leonard to Toronto in July. The Spurs are bidding for a record 22nd consecutive playoff berth, a streak that began in Gregg Popovich’s first full season as Spurs coach in 1997-98.

At 27-25, Sacramento is on course to post its first winning record since the 2005-6 season. But the Kings will have to leapfrog at least two teams to stop the league’s longest playoff drought (12 seasons). The Suns (nine seasons) and the Orlando Magic (seven) are on course to extend their own playoff droughts.

The Lakers’ playoff drought will hit a hard-to-believe six seasons in a row if James cannot save Los Angeles over its final 29 games. James just missed 17 consecutive games with a strained groin — the longest injury absence of his pro career — and is at risk for missing the postseason for the first time since his second N.B.A. season, in 2004-5.

Carmelo Anthony finally became an unrestricted free agent on Sunday after clearing waivers nearly three months after the Houston Rockets sent him away in November after just 10 games together. The Rockets traded Anthony to Chicago on Jan. 21; the Bulls, who needed a roster spot, waived him Friday without him spending a single second with the team.

In the seven games Golden State has deployed a lineup of DeMarcus Cousins, Stephen Curry, Kevin Durant, Klay Thompson and Draymond Green, that group is averaging 127.1 points per 100 possessions in 54 minutes. Call it a small but ominous sample size.

Oddsmakers in Las Vegas have the Warriors as overwhelming favorites to win their third consecutive championship and fourth in five seasons. According to ActionNetwork.com, Golden State is -225 to win it all, meaning that you would have to bet $225 to win $100. Boston, Milwaukee and Toronto are next in line at +1,000, meaning that a $100 bet would win $1,000 if any of those teams won the title.