The N.B.A. is back (so soon!) with a doubleheader on opening night, featuring several of the league’s biggest names: LeBron James, Kevin Durant, Stephen Curry and Kawhi Leonard.

For Durant, it’s a much-anticipated regular-season debut with the Nets, alongside Kyrie Irving. And it’s a reunion, as the Nets face off against his former team, the Golden State Warriors, and former teammate in Curry.

For James, it’s ring night: His Los Angeles Lakers will have the official ceremony for the championship they won just over 10 weeks ago. Then they will take on Leonard and the Clippers in the night’s second game.

How to watch: TNT

Here’s what you need to know: 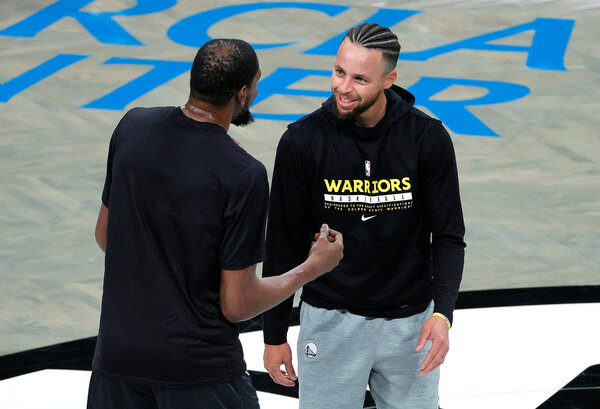 Kevin Durant is hot to start.

It’s a beautiful sight to see. Kevin Durant has hit 4 of his first 5 shots. What’s impressive is that all four of his makes have been different. One was a runner, another a 3-pointer, a pull-up jumper which also sent him to the line, and, finally, a baseline dunk. He scored 8 points in the first three minutes of the game. An impressive start so far, pushing the Nets to an early double-digit lead, 18-8. Kyrie Irving has hit 2 of 3 so far for 5 points.

Klay Thompson says there’s a ‘huge hole in my soul.’

Klay Thompson, the Golden State Warriors guard who will miss this entire season, said on Instagram shortly before Tuesday night’s game that “It pains me every day knowing I won’t be able to chase a chip.”

Thompson, a five-time All Star, missed all of last year’s campaign after tearing the anterior cruciate ligament in his left knee in the 2019 finals. In November, as he was gearing up to return for this season, Thompson tore his right Achilles’ tendon, one of the most devastating injuries for a basketball player. He had surgery and was ruled out for his second straight season.

“I do not want to be writing this,” Thompson wrote on Tuesday. “My soul is in Brooklyn taking a pregame nap. Unfortunately, reality looks a bit different. Since June 13th, 2019 I have spent countless hours trying to regain the form I was in that you see pictured above, with a lot of heartache along the way.”

“I want DubNation to know I’m doing everything in my power to get back to who I was!” Thompson added. “I hate missing games — I prided myself on being out there every night for the fans and my teammates. Doesn’t matter if its regular or postseason. There’s a huge hole in my soul when I can’t do what I love and compete against the best players in the world. But I plan on playing for a long time and will continue to work every day to get back on the court and help my team bring more championships to the Bay.”

How did K.D. and Kyrie look during the preseason?

It’s rare that an N.B.A. preseason game is must-see television.

But a matchup featuring the Nets and Washington Wizards might have been the most anticipated preseason game in New York basketball history.

The Nets won, 119-114, at Barclays Center, but what mattered was the product on the floor: Durant and Irving looked every bit the All-Stars they have been their entire careers.

But Durant showed minimal sign of that injury. He made all three of his field goals in the first quarter and looked spry running up and down the court. He finished the first half with 15 points on eight shots. One of the best scorers in the history of the N.B.A., Durant pulled out moves he had refined before his injury, like his one-footed fadeaway. He was also active defensively, blocking two shots and taking a charge.

Durant said afterward that he didn’t think he had played particularly well, but that the game was a “good first step.”

‘Nerves and anxiety’ for Steve Nash in his coaching debut.

Before his first regular-season game as an N.B.A. head coach, Steve Nash told reporters that Kevin Durant “does look exactly like he did before the injury, but he also needs a little bit of breathing room to get himself acclimated to competitive basketball.”

“The only thing I say about it is that he’s done everything and he’s in absolutely the ultimate position to come back from this injury,” Nash said of Durant, who tore his right Achilles’ tendon during the 2019 N.B.A. finals, which sidelined him for all of last season.

Nash continued: “But I think we also have to give Kevin time to play N.B.A. games and not get carried away.”

Nash also said there would be no minutes restrictions for any Nets players and that he hoped to play 10 players against the Golden State Warriors. The starting lineup of Durant, Kyrie Irving, DeAndre Jordan, Spencer Dinwiddie and Joe Harris — which Nash used in the preseason — will be the one used on opening night. This makes Caris LeVert the team’s sixth man.

As far as his coaching debut — Nash’s first direct involvement in a N.B.A. game since he retired as a player in 2015 — Nash said that this gameday had a “different rhythm but similar nerves and anxiety” as when he was a player.

“I always felt a little nerves until I actually got out there in pregame warm-ups. So I feel that a little bit tonight and that’s probably a good thing,” Nash said.

Here’s hoping the Warriors can be great again.

I’m not ready to say goodbye to the Golden State Warriors.

I find myself pining for the splendor of Steph Curry, the snarl of Draymond Green, the beautiful basketball, the sheer dominance. I fear we may never see it again — at least, not at the level we once did.

Klay Thompson’s shredded Achilles’ tendon probably means a second straight lost season, and possibly a fatal blow to the Warriors’ hopes for a revival. And that’s where I truly become wistful.

I don’t miss the Warriors as a fan would (my San Jose roots notwithstanding). It’s not just that I’ll miss writing about their roundball artistry (though that’s certainly true, too). It’s more personal than that.

To their fans, the Warriors provided endless basketball bliss — a montage of deep 3s and shimmies and raucous parades. To others, they provided a standard of selfless play and joyful domination. They defined an era, and redefined the formula for building a superteam.

But they gave me something far more precious: a final few hours with my father. I just didn’t know it at the time.

Drama for the Clippers. New deals for the Lakers.

In some ways, it feels like Kawhi Leonard joined the Clippers a million years ago. In fact, it was only during the summer of 2019 when the Clippers signed Leonard and traded for Paul George, a momentous one-two punch that reshaped the franchise.

But some of the behind-the-scenes intrigue of that momentous summer recently resurfaced when Johnny Wilkes, a man who claims to be a Leonard family confidante, accused Jerry West, one of the team’s executives, of reneging on a pledge to pay him for helping deliver Leonard to the Clippers.

After Wilkes, who played high school basketball with Leonard’s uncle Dennis Robertson filed a lawsuit, the N.B.A. opened an investigation. The Clippers have denied any wrongdoing, calling Wilkes’s allegations “baseless,” and Leonard told reporters that Wilkes had nothing to do with his decision to sign with the Clippers.

Leonard has never been considered among the N.B.A.’s most charismatic stars, but his short tenure with the Clippers has produced no shortage of drama. Also percolating in the background: his contract situation. Leonard suggested this week that he would decline his player option for next season, meaning he would become a free agent.

Meanwhile, all is copacetic in Laker-land: LeBron James and Anthony Davis both agreed to new long-term deals over the off-season.

More about the Lakers and Clippers: