N.C.A.A. Clock May Be Running Out on Graduate Transfers

MINNEAPOLIS — When Matt Mooney was refurbishing used basketball shoes and selling them out of the trunk of his car in high school, that entrepreneurial streak looked as if it would carry him further than basketball. At the time, he had only one Division I scholarship offer.

When Tariq Owens was at a renowned prep school, as a bouncy, loose-limbed, four-star recruit, an N.B.A. career seemed less like a pipe dream than a reasonable career path. College would serve as finishing school.

But several years (and universities) later, there they were last weekend in Anaheim, Calif., with fists clenched and arms raised triumphantly overhead, as unlikely teammates — and improbable one-season catalysts — in helping Texas Tech reach the Final Four for the first time.

Mooney and Owens arrived at Texas Tech less than a year ago as a less heralded type of one-and-done player, having taken advantage of the N.C.A.A.’s graduate transfer rule, which allows athletes who have earned a degree and have eligibility remaining to switch colleges without having to sit out a year.

The graduate transfer rule, the rare N.C.A.A. regulation that gives leverage to the athlete, has been used by hundreds of players since it was relaxed in 2011. And at a moment when athletic admission graft, shoe company payola and questions about whether a transcendent (and unpaid) figure like Zion Williamson should even risk playing college basketball at all, the graduate transfer rule casts the beleaguered N.C.A.A. as reasonable and almost munificent.

It is also a rule that may not last much longer.

In two weeks, the N.C.A.A.’s primary legislative body, the Division I Council, will vote on a measure that could severely restrict graduate transfers. The proposed rule change would require that colleges accepting graduate transfers be docked a scholarship the next year if the transfer does not earn his secondary degree within a year.

So as graduate transfers have continued to increase — there were 124 this season in men’s basketball, according to the website GradTransferTracker, including a handful who were key contributors on N.C.A.A. tournament teams — and as programs have found value in them as a quick fix that suits both team and player, the new rule is seeking to discourage them by effectively adding a tax on programs that accept such players.

“That’s really draconian,” Rodney Fort, a sports economist and professor of sports management at the University of Michigan, said of the rule change. “This is like losing a scholarship from an N.C.A.A. penalty.” 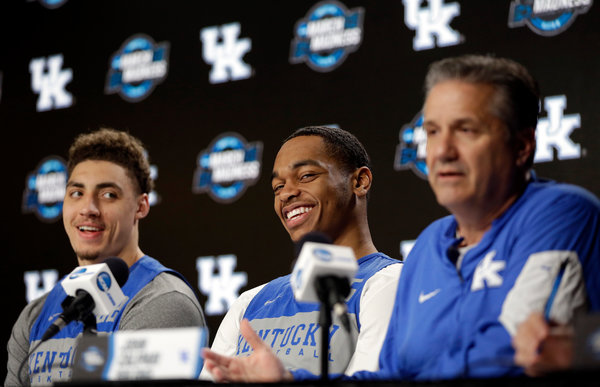 Justin Sell, the athletic director at South Dakota State who led the Division I transfer working group that developed the proposal, said that too often graduate transfers in men’s basketball and football had little interest in obtaining graduate degrees.

Sell said that the committee surveyed athletic directors, faculty representatives, senior woman administrators, coaches and athletes over 18 months. Still, the fingerprints of basketball coaches in the working group’s recommendation were not hard to miss. The lone men’s basketball voice on the committee was St. Joseph’s Coach Phil Martelli, who in a widely publicized 2011 case blocked one of his graduating players from transferring by refusing to sign a release. Partially as a result of that case, releases are no longer required. (Martelli, who was fired by St. Joseph’s last month, declined to comment through a university spokesman.)

The rule itself seems to have come straight from the mouth of Kentucky Coach John Calipari, who suggested to ESPN in 2016 — long before the committee began its work — that “if the kid gets his grad degree in one year, fine; if he doesn’t, you’ve got to use the scholarship for two years.”

Sell conceded objections about practicality (many graduate programs take two years to complete) and fairness (the rule does not apply to athletes who compete as graduate students without transferring) were fair, but said his group’s intent was to “manage behavior.”

“When you’re trying to manage behavior and put together policies and rules in trying to create ethical behavior and integrity, there are challenges to that,” Sell said. “It’s really hard to police integrity.”

But the rule change leaves no room to assess the motivations of players who, degrees in hand, seek new horizons with their remaining eligibility. The Ivy League, for example, does not allow its teams to play graduate students; that led the former Yale guard Makai Mason — who had missed his junior season with a broken foot — to help Baylor to the N.C.A.A. tournament this spring. The rule also gave the former Stanford player Reid Travis the opening he needed to take his N.B.A. hopes, and his final year of eligibility, to Kentucky for some postgraduate basketball education.

Geno Crandall, who had begun his college career at North Dakota State, ended it as a reserve guard at Gonzaga this spring.

“I kind of wanted a different experience,” said Crandall, who said he had sought out Mooney, whom he had met when Mooney was at South Dakota, for advice on the transfer process. Crandall is working toward a master’s degree in organizational leadership at Gonzaga but said he took a lighter course load, two classes per semester, so that he could focus on basketball.

“Honestly, I’m actually enjoying it a lot more than I did undergrad,” Crandall said before the Zags lost to Mooney’s Red Raiders in the West Region final last weekend. “There’s a lot more discussion that goes into it, a lot more adult feel. This is more tailored to what you find interesting.”

Gonzaga’s Crandall said he was only vaguely aware of the proposed restrictions on graduate transfers. But he did not like the idea that a rule change might deny future players the path he had chosen.

“Whether it’s good or bad, the N.C.A.A. tries to take a lot of control away from players,” he said. “You commit to a school and they tell you they want you to play and help you get your degree, so I feel like once you get your degree your obligations are kind of fulfilled.”

Nearly 40 percent of Division I men’s basketball players who arrive from high school will transfer by the end of their sophomore year, according to N.C.A.A. data from 2011 to 2017. Owens and Mooney, now in the Final Four, were in that group.

Owens left Tennessee after his freshman year when its coach was fired. He transferred to St. John’s, where he earned a degree in sports management. Mooney left Air Force, unhappy with the military lifestyle, for South Dakota, where he got a degree in innovation and entrepreneurship. He was content to remain there for his final year until his coach, Craig Smith, left for Utah State last April.

With eligibility left because of their transfers, Owens and Mooney hit the graduate transfer market seeking the same thing — a place where they could win (neither had been to the N.C.A.A. tournament) and burnish their skills for a possible pro career. Texas Tech turned out to be a perfect match: a program on the rise with a respected coach, Chris Beard, and a roster that was a perfect fit for Owens, a 6-foot-10 shot-blocker and finisher, and Mooney, a ball-hawking point guard who could find his shot.

“This is an environment where I knew I’d be able to work and I’d be coached hard,” Owens said. “I like being in environments where you’ve got something to prove.”

At Texas Tech, Owens, 23, and Mooney, 24, are enrolled in a master’s program for interdisciplinary studies, taking three classes in the fall and spring that are tailored to their interests. Mooney is taking two of his classes online.

“My primary focus is basketball, to try to set myself up for the pros,” said Mooney, who is studying educational leadership. “Academics aren’t a huge priority right now, but you’ve still got to take care of it. I’ve got my degree — that’s what’s most important.”

He added: “I didn’t leave places because I wasn’t satisfied with playing time or things like that. I definitely didn’t want it to go this way. I didn’t want to go to three different schools. I wanted to go to one school, play there four years, have a great career and have a home to go back to and graduate. But sometimes life doesn’t work out that way.”