Rafael Nadal and Novak Djokovic are on course for a semi-final meeting at Wimbledon after both came through their third-round matches.

Nadal ensured he will keep the world No.1 ranking whatever happens during the second week by easing past Alex De Minaur on Saturday.

The Spaniard's 6-1 6-2 6-4 victory means Roger Federer cannot catch him even if the Swiss goes on to win a ninth title at the All England Club. 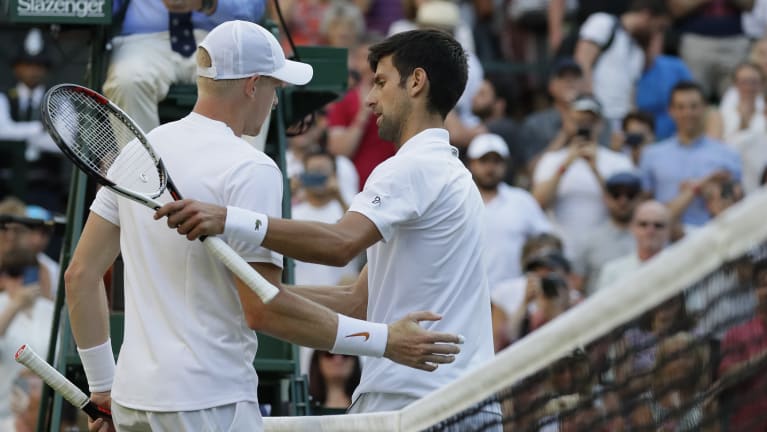 Not that the ranking by his name means much to Nadal for the moment.

"I really didn't come here to hold No.1, I just came here to try to do the best tournament possible.

"It is very positive to be already in the second week, winning three matches."

"I thought it was a high-quality tennis match, to be honest," Djokovic said.

"It was very, very, very intense. Just a couple points here and there.

"Obviously the fourth set was very close. I just made him play an extra shot, got that crucial break in the ninth game that allowed me to win the match."

Edmund still enjoyed the experience and said: "It was great. I really enjoyed it. Playing on Centre Court is always like a dream and a great experience. At points in the match it was really loud. It was a great atmosphere to be in."

Djokovic felt some in the crowd overstepped the mark with their behaviour.

"I expected them to support Kyle, obviously. But at times they were slightly unfair to me. That's how it goes," he said.

The biggest threat to Nadal reaching the last four could well be fifth seed Juan Martin del Potro, who is through to the fourth round for the first time since 2013 after a 6-4 7-6 (7-4) 6-3 victory over Frenchman Benoit Paire.

Del Potro pushed Djokovic all the way in one of Wimbledon's most memorable semi-finals five years ago before his career was nearly ruined by wrist problems, but he appears back to his best.

"I had my chances to win here a few years ago. I don't know how far I will go in this tournament, but I'm confident with my game at this time. But I always say the same. Roger and Rafa are the favourites," the Argentinian said.

Fourth seed Alexander Zverev said he felt like someone had "just unplugged me in the middle of the fourth set" in his surprise 7-6 (7-2) 4-6 7-5 6-3 6-0 defeat to qualifier Ernests Gulbis.

Former runner-up Milos Raonic made short work of finishing off his clash with Dennis Novak.

The Canadian and his Austrian opponent were forced off by darkness in the third set on Friday night but Raonic, beaten by Andy Murray in the final in 2016, secured a quick break to take the third set before dominating the fourth to win 7-6 (7-5) 4-6 7-5 6-2.

He could have a big say in the second week of the tournament.