Rafa Nadal rallied from a set down before easing past Fabio Fognini 4-6 6-1 6-2 in the Italian Open quarter-finals on Friday to set up a mouth-watering clash against long-time adversary Novak Djokovic for a place in Sunday's final.

Djokovic plotted a similar path to the Spanish claycourt king when the Serb lost the first set against Japan's Kei Nishikori before recovering to win 2-6 6-1 6-3 and seal an open-era record 51st career meeting against Nadal. 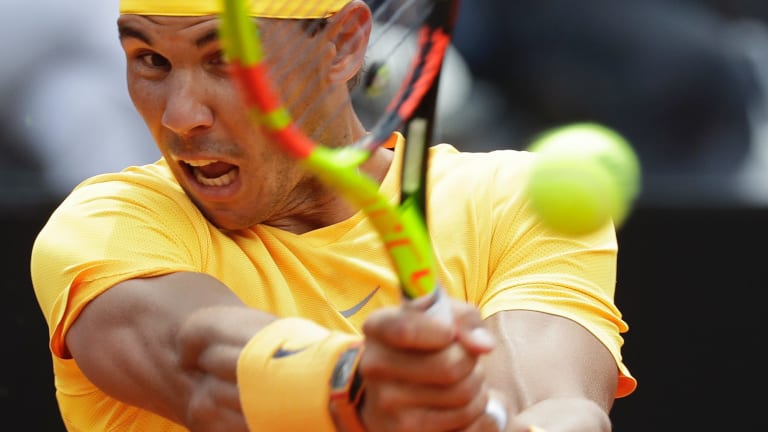 Nadal started strongly and raced into a 4-1 lead but Fognini refused to surrender in front of a partisan Rome crowd, clawing a break back before running away with the set.

The Italian's joy was short-lived, however, as Nadal regrouped, charging around the court and putting his opponent under relentless pressure as he took the second set to level things up.

Fognini was then hampered by an injury to his left knee as Nadal continued to fire on all cylinders and the Spaniard duly wrapped up the match in two hours and 14 minutes.

"I feel it is an important victory for me. There's a lot of positive things out of the match today."

Djokovic, who last met Nadal in the semi-finals of the 2017 Madrid Open, was on the back foot early against Nishikori as the Japanese baseliner capitalised on consecutive backhand errors to forge the first break.

Both players are still feeling their way back to full fitness after troublesome long-term injuries, but Djokovic showed more promise ahead of the upcoming French Open in his positive response to falling a set behind.

The Serb broke Nishikori three times to force a decider before edging a tight third set with some courageous shot-making.

"Today, the quality of tennis was really high," Djokovic said. "Kei was playing fantastic, especially in the first set… and it took me little bit of time to adjust to his pace.

"It means a lot to me to be able to play the semi-finals of a tournament again. This is what I was looking forward to. It's what I was hoping to achieve."

Meanwhile, defending champion Alexander Zverev beat ninth seed David Goffin of Belgium 6-4 3-6 6-3 in the day's final match to remain on course to defend his title after notching up a 12th consecutive victory.

The German, who is the form player on the ATP Tour, will battle Croatian Marin Cilic for a place in the final. Fourth seed Cilic pulled off a regulation 6-3 6-3 victory over Spain's Pablo Carreno Busta earlier in the day.