Fijian-born powerhouse Isi Naisarani's potential to solve Australia's back-row dilemma has been underlined, with his naming as a development player to accompany the Wallabies on their spring tour.

Naisarani isn't eligible to represent Australia until April, but the 195cm 23-year-old is widely considered the player who can add much-needed height and bulk alongside world-class flankers Michael Hooper and David Pocock. 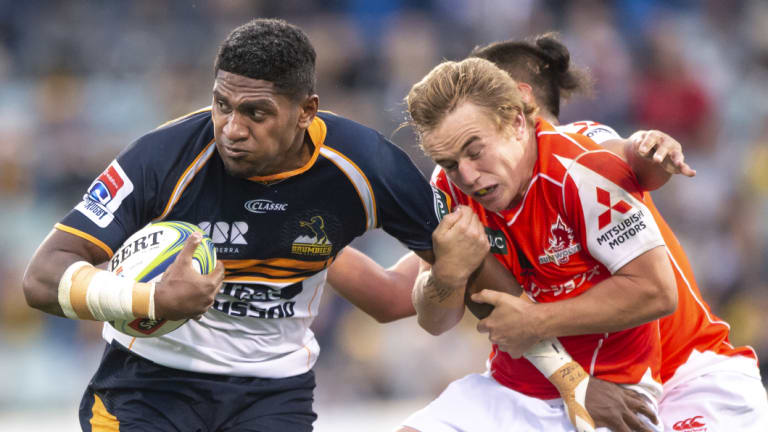 Eye to the future: The Fiji-born Isi Naisarani will be eligible to represent Australia early next year.Credit:Sitthixay Ditthavong

He played for Western Force in 2017 and the Brumbies this year, before committing to the Melbourne Rebels for next year.

Talented Queensland Reds teenage back Jordan Petaia and halfback Jake Gordon are the only uncapped members of the official 32-man squad.

Petaia would become the third-youngest player to ever debut for the Wallabies, should he make an appearance in the November internationals against either Wales or Italy.

Naisarani and fellow Brumbies back-rower Rob Valentini, who will also travel as a development player, are still to earn a Test cap.

Utility back Adam Ashley-Cooper, who is based in Japan with Kobe Steelers, has the chance to add to his tally of 116 caps – the last being in 2016.

Veteran hooker Tatafu Polota-Nau will link up with the Wallabies in Wales, after playing for Leicester in the English Premiership since his last Test appearance in September against Argentina on the Gold Coast.

Holloway has been battling with hamstring and back niggles.

Lock Adam Coleman has been training fully after missing the Bledisloe game with a groin problem.