Nature Strip refuses to be mown down in Moir Stakes

The five-year-old gelding bounced quickly from his inside barrier and under McDonald's guidance defied his 14 rivals to run him down. 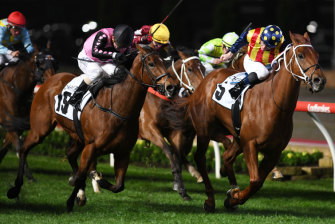 Nothing could get close enough in time as the front running son of Nicconi charged down the straight to see off his closest pursuer, the outsider Miss Leonidas, with Sunlight in third place doing her best work close to the finish of the 1000 metre race.

Last time out Nature Strip's trainer Chris Waller and connections came in for plenty of punter criticism when restraining tactics were tried on the headstrong galloper and he could only finish fourth of six in the 1000 metre Concorde Stakes behind Redzel.

This time they allowed him to do what now conclusively appears to suit him best – jump and run and utilise his great natural speed.

Now he could be stepped up in distance for The Everest – if he can secure a slot.

And if he can't, said Waller, he could come to Caulfield for the Schillachi Stakes which would give him a guaranteed slot in the $14 million 1200 metre extravaganza at Randwick on Caulfield Cup day.

Waller is well used to enjoying the adulation of the Moonee Valley crowds having saddled the legendary Winx to win four Cox Plates at the track, something he alluded to afterwards.

''He's a popular horse, we seem to get more criticism with him than we did with another horse who was our last group 1 winner here.''

Waller said he had given McDonald no instructions, happy to trust his fellow Kiwi's judgment.

''You can't push him. If he does not step away you have to be where you are. I said do what you think is best. I don't think 1200 metres (The Everest distance) is a problem.

McDonald added: ''He was relaxed, he got it right today. In his last run in Sydney they were probably just a bit annoying to him .

''He's a pretty simple horse really, let him do his own thing.''

Earlier in the evening the Trent Busuttin and Natalie Young training combination landed a double, winning the opening event with promising sprinter Barcali and then following up in the next race with The Holy One, who will now go for the Caulfield Guineas.

Waller also had a double having saddled Captain Cook to win the group 3 JRA Cup. The English import may now be targetted at the Cranbourne Cup, while Ciaron Maher and David Eustace's Loving Gaby made a very impressive return in the Scarborough Stakes.

She will be aimed at the Empire Rose Stakes, as will Princess Jenni, winner of the Stocks Stakes earlier in the evening.