AFL football operations boss Steve Hocking has insisted that, contrary to popular belief, the inevitable introduction of numerous rule changes designed to make the game more attractive and free-flowing may not necessarily occur next season.

It’s been widely expected that, based on the overly defensive, low-scoring and congested nature of modern footy, the league was determined to act quickly and make various rule changes in time for the start of the 2019 season.

Trials of new rules have already taken place at Hawthorn and Brisbane Lions, training under the watchful eye of the AFL.

But Hocking was in no rush and was keen to involve as many fans as possible in the process, saying 2020 or even 2021 might be the starting point for the phasing in of proposed rule changes.

“One of the big parts [of the overall plan] is where can we actually put this out into the public and allow people to come along and view it and have their involvement,” Hocking told SEN on Thursday.

“Having spent 10 months with the commission, they are super impressive people and there’s no way known on [AFL commission chairman] Richard Goyder’s watch he’s just going to pull the lever and let all of this roll through. There’s going to have to be so much work and evidence and also understanding and everyone’s got to be ready for it.

“If we put too much air in all in one hit, we will blow the bubble up.”

There is widespread apprehension in the footy community as to what the rule changes will do to the game, with a common concern among average punters being how many rule changes have already occurred in recent years.

But Hocking worked to allay their fears, saying that he and his team, which also consists of coaching and innovation manager David Rath and stakeholder and engagement manager James Podsiadly, care about the game.

“I get that people are nervous,” he said.

“Seriously, they don’t need to be. We’ve got a group of people that are from club land, that understand the game and are caring for the game and wrapped around that we’ve got a competition committee that care for the game with varying voices.”

Hocking stressed that the guiding principle for his team in devising new rules was the charter of the game which was finalised in 2014.

“There’s nine areas within the criteria of that that was written a number of years ago and it’s still relevant today,” he said.

“On one hand there are fewer restrictions on where players can be located across the ground. In the next wording, continuous and free-flowing football is encouraged ahead of repetitive short passages of play.

“The MCG has shrunk into a small bubble and that bubble in defence is the smallest and as compact as it can possibly be. And then what the clubs do is they then increase that bubble back out when it’s offence. 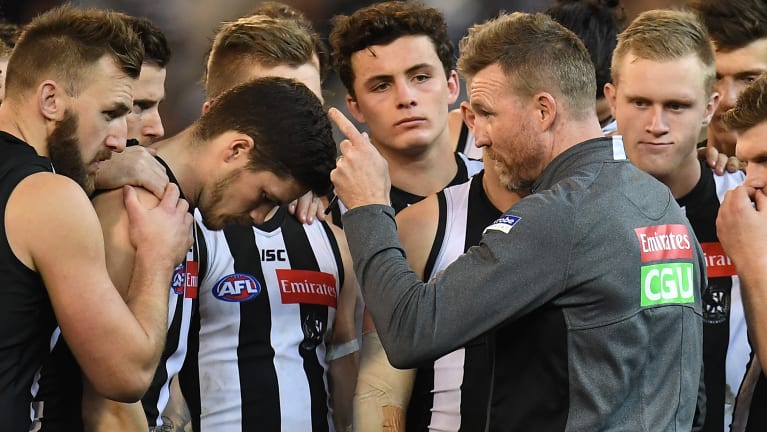 Collingwood coach Nathan Buckley is worried about a ‘blight’ on the game.

“What we’re trying to do, in navigating all of this, is how much air do we put back in the bubble from a defensive part of the game and the overall game so we actually free the players up to play?

“Everyone is getting caught up in the fact that they’re rules. It’s actually modifications to try and open that back up.”

Club recruitment and list managers, in particular, have expressed their concern about potential rule changes as it could impact the plans they put in place for which kind of players they would like to recruit.

However, Hocking questioned how much of an effect the timing of the announcement of rule changes would actually have on clubs’ recruitment and list strategies.

“I’m not sure how much lead time list managers actually need in competition,” Hocking said.

“From our point of view, list managers will always recruit the best players. I’m not sure it impacts them that massively.”

Hocking likened the implementation of new rules that have been trialled to flying a plane through turbulence and trying to land it.

So far, 12 AFL coaches have been briefed on the proposed new rules. Hocking and his team are now aiming to address the remaining six Victorian coaches as soon as possible.

Collingwood coach Nathan Buckley was outspoken on Wednesday, declaring new rule changes could end up being a blight on the game.

Hocking appreciated Buckley’s concerns, but pointed out that he was one of the six coaches yet to be briefed.

The former Geelong player intimated that an enlarged goal square could be one of the rules implemented.

“The work behind it is hundreds and hundreds of hours and at no stage are we going to make a decision whereby it’s contrived or whereby Nathan Buckley feels it’s a blight on the game,” he said.