Jacob Wiley has only been in Australia for a matter of weeks but the Adelaide 36ers import has a connection to the nation that will last a lifetime.

The former Brooklyn Nets forward and wife Brittany welcomed baby daughter Layla into the world in Adelaide just before the team flew out for their NBA pre-season clash with Utah Jazz a little over two weeks ago. 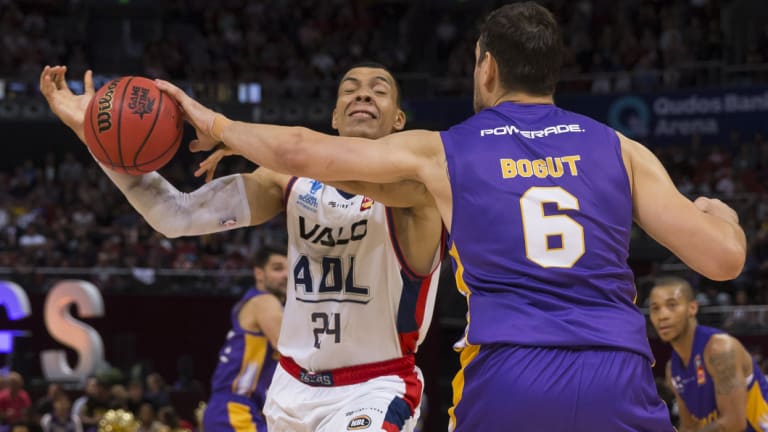 Layla’s arrival, joining big sister Aliya, has made life off the court more chaotic but on the court Wiley has still been handling business with the Sixers.

“It’s absolutely insane but as a pro you have to make sure you show up to games ready to go,” Wiley said.

“That’s always my goal. During the week I’m a train wreck, then for the games I’m good to go.

“To have my daughter born the day before we leave for Utah was unbelievable – we just got lucky.”

The 24-year-old is only in his second full year as a professional basketballer, spending last year signing a two-way contract with NBA club Brooklyn Nets and then finishing the year playing five NBA games, then the rest of the G-League season with their Long Island Nets, followed by a short-term deal in Germany.

It was in Germany that he first came across long-time Adelaide 36ers player Mitch Creek who was on an opposing team.

Then the pair both signed with Dallas Mavericks for the NBA Summer League and quickly became friends. Creek told Wiley he would be the perfect fit for coach Joey Wright’s up-tempo style of play and that planted the seed for his move to the Sixers.

Wiley is an ideal replacement for Creek as they have similar elite athleticism and play with passion; Wiley has already started hyping up the crowd in Adelaide following dunks or big plays.

The Sixers have a 2-1 record and Wiley has been a foundation of those wins with big shots and key rebounds in their two wins over Sydney Kings last Saturday and on Friday night.

“Mitch is a good friend of mine and he felt like I would have some success and it would be a perfect fit for me so he put me in touch with coach Joey,” Wiley said.

“From there we just clicked. Joey felt right away I would be a good fit and it just went from there. I’m glad I’m here.”

In many professional fields the most powerful recommendations come from peers but in professional basketball that isn’t always the case, although Wiley’s respect for Creek’s achievements with Adelaide led him to take him on his word.

“It just depends on the player I guess,” Wiley said.

“I have a lot of respect for Mitch and what he did in Adelaide over six or seven years so when he has something to say about a club I will listen and I had already wanted to come to Australia anyway.

“It finished the deal when he said Adelaide would be a good fit. Then it all just started to make sense to me.”

Aside from being the birth place of his daughter, Wiley has been won over by Australia and had no qualms in admitting he would love to extend his stay in the country.

But as a young professional he also still dreams of returning to the NBA as well.

“As a basketball player your goal is always to play at the highest level you can but I’m really enjoying my time in Australia,” Wiley said.

“I wouldn’t mind at all playing my whole career here if that's in the cards for me.”

Word about Wiley’s leaping ability and rebounding skills moved quickly around NBL circles after he starred at the NBL Blitz and he is noticing extra attention, especially when he attempts to go for rebounds.

But teams have opted to stand off him at times, so he knocked down back-to-back three-pointers in the last term against Sydney Kings in round one and won’t hesitate to take big shots.

“I’m always looking to get involved, especially at the end of games, but sometimes the ball just finds you and you have to handle that situation accordingly," Wiley said.

“You want to show that you can shoot but don’t want to take away from what you are good at which for me is getting to the rim.”

Melbourne United placed a big emphasis on rebounding this week in anticipation of Wiley and other Sixers.

Wiley knows to expect a feverish contest on Sunday and overall he loves the competitiveness of the NBL.

“This league is incredible and the talent level is amazing,” Wiley said.

“Every team has guys who can really go, I feel like any team can beat any team on any given night.

“It’s been fun so far and our team is very deep, we have a lot of guys who can play.

“We are only three games in but it’s promising signs so far.”

Melbourne United and Adelaide 36ers play at Melbourne Arena on Sunday at 2.50pm.