A new era of Canadian soccer has kicked off in Hamilton.

Forge FC and York9 FC drew 1-1 in the inaugural match of the Canadian Premier League in front of 17,611 fans at Tim Horton’s Field.

Ryan Telfer scored the first goal in league history when he put the visitors ahead in the third minute after he broke free just outside the 18-yard box and beat Forge keeper Triston Henry with a strike into the bottom left corner of the net.

Forge FC had a litany of chances to equalize in the first half, including a dazzling bicycle kick from striker Emery Welshman in the sixth minute that grazed the outside of the right post.

Toronto native Tristan Borges had a glorious opportunity to even the contest for the home 11 in the 50th minute, but his left-footed rocket banged off the centre of the crossbar and out of danger.

Borges, Forge FC’s most dangerous offensive threat of the afternoon, had another top-quality scoring chance in the 60th minute but he was denied in close by York9 keeper Nathan Ingham.

The game was on even terms again in the 78th minute when Hamilton’s Kadell Thomas curled the equalizer past Ingham and into the right side of the net. 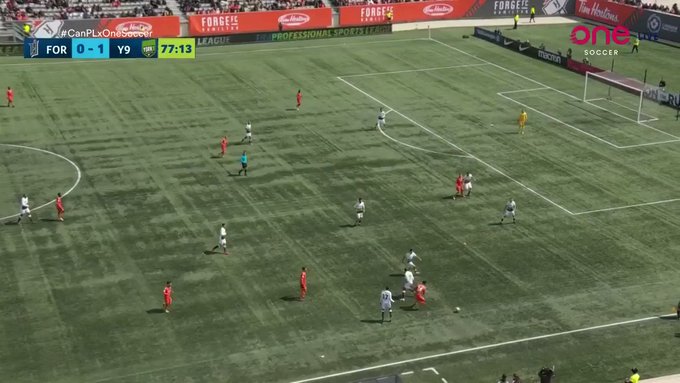 York9 captain Manuel Aparicio was sent off in stoppage time after he was booked for the second time in the game, but Forge could not find a second goal.

Hamilton’s next match in May 4 in Halifax against HFX Wanderers FC.