OAKLAND, Calif. — For six games, Fred VanVleet was tasked with the most difficult defensive assignment of his life: Attach himself to one of the N.B.A.’s greatest scorers as the Toronto Raptors pursued a piece of history. So, for six games, VanVleet chased Stephen Curry of the Golden State Warriors. Six games of back cuts and pull-up jumpers and crossover dribbles and punishing screens.

It was like wading into choppy waters and bracing for wave after wave.

But late Thursday night, as the Raptors began to celebrate their first championship after closing out the Warriors with a 114-110 victory in Game 6 of the N.B.A. finals, VanVleet wore a Champagne-soaked T-shirt and a stitched-up gash under his right eye as he reflected on helping topple the league’s most majestic team. The Raptors, he said, were not conventional champions.

In fairness, the Raptors did have one glam star: Kawhi Leonard, the long-limbed forward who was named the finals’ most valuable player after averaging 28.5 points and 9.8 rebounds against the Warriors. But Leonard was eager to share that award with Kyle Lowry, the All-Star point guard who has been one of the few staples of the organization in recent seasons.

The Raptors’ path to a title was far from a straight line. In each of the past three seasons, they were knocked out of the playoffs by the LeBron James-led Cleveland Cavaliers, and his departure for the Los Angeles Lakers last summer created an opportunity that Toronto was eager to seize. But that opportunity only took shape thanks to years of calculated risks and personnel changes orchestrated by Masai Ujiri, the team’s president of basketball operations — a zillion zigzags that ultimately led the Raptors to the very top.

“To do it with the group of guys that we did it with is amazing,” said Lowry, who scored 26 points on Thursday. “It’s just kind of still surreal.”

Ujiri’s most obvious gamble, of course, was trading for Leonard last summer — even though Leonard had just one year remaining on his contract, did not list Toronto as one of his preferred destinations and was acquired in exchange for DeMar DeRozan, who was shipped to San Antonio after spending nine seasons with the Raptors.

Leonard, aware that Lowry and DeRozan were close, said he sent Lowry a text message after the trade. 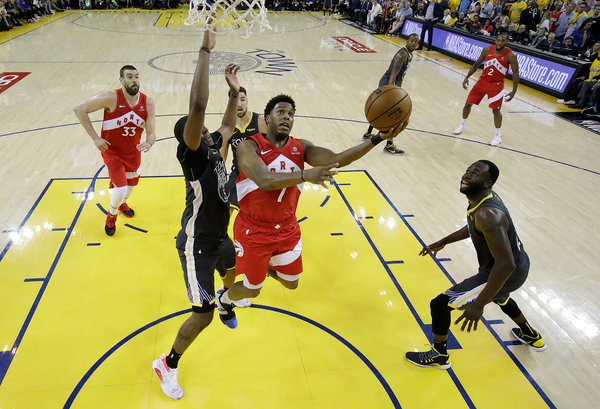 “I said, ‘Let’s go out and do something special,’ ” Leonard recalled. “‘I know your best friend left. I know you’re mad. But let’s make this thing work out.’ And here we are today.”

Ujiri’s other big move last summer was replacing Coach Dwane Casey with Nick Nurse, a bespectacled assistant who had spent most of his career overseas and in the N.B.A. G League. Nurse was both unproven (at least as an N.B.A. coach) and undaunted, and those qualities seemed to make him the perfect fit for a team full of strivers.

The Raptors have turned player development into something of a science. Just two years ago, Pascal Siakam (the 27th pick of the 2016 draft) and VanVleet (who was not drafted at all out of Wichita State) were pairing up for a championship run of a lesser magnitude, as key members of Raptors 905 in the G League.

Under Nurse, both flourished this season before becoming breakout stars in the playoffs. On Thursday, Siakam, a 25-year-old power forward who goes by the nickname “Spicy P,” had 26 points and 10 rebounds, while VanVleet — in addition to defending Curry — scored 12 of his 22 points in the fourth quarter.

It was an eventful series for VanVleet, a third-year point guard who scored 15 points off the bench in Game 1, lost part of a tooth after getting elbowed in Game 4, then reeled off a collection of crucial plays in Game 6. He made five 3-pointers, including one that gave the Raptors the lead for good with less than four minutes to play.

After the final buzzer, VanVleet and Curry embraced.

“He’s a gamer,” Curry said. “I obviously saw a lot of bodies on defense, but he was one that took the challenge. And he’s a champion now. Well deserved.”

The game felt like the end of an era for the Warriors, who played their final games at Oracle Arena (they will move to a new arena in San Francisco next season) while coping with a catastrophic series of injuries. After Kevin Durant tore his Achilles’ tendon in Game 5, Klay Thompson tore the anterior cruciate ligament in his left knee in Game 6. Golden State’s future — as jarring as this sounds — is suddenly uncertain after three championships in five seasons.

The Raptors have questions of their own moving forward, starting with Leonard, who is bound for free agency: Will he stay or will he go?

But for one night, the organization reveled in the present. Marc Gasol, acquired in a midseason trade with the Memphis Grizzlies, video chatted on his cellphone with his former teammate Mike Conley while pounding a can of Budweiser. Ujiri draped himself in a Nigerian flag. And Danny Green, the veteran guard, was congratulated outside the locker room by Vince Carter, the 42-year-old swingman who, once upon a time, was the face of the Raptors when respectability was an achievement.

These Raptors believed they could do more, then proved it.