The NSW Waratahs have once again surrendered a sizeable lead on New Zealand soil as they came up short against the Chiefs on Saturday.

Daryl Gibson's ever-improving side took to the field in Hamilton with steam coming out of their ears. They led 14-0 after 14 minutes but eventually fell 39-27 in what was the team’s third defeat in four weeks to Kiwi teams. 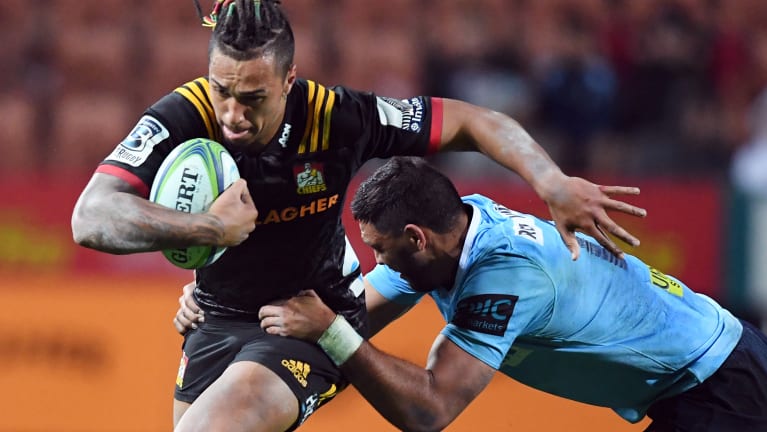 Breakthrough: Sean Wainui of the Chiefs, left, held back by Kurtley Beale of the Waratahs.

There were striking similarities to the loss a fortnight ago against the Crusaders when NSW squandered a 29-0 first half lead before crumbling 31-29.

This time around, scores were locked at 24-24 midway through the second half before the Chiefs’ experience helped them get over the line. Damian McKenzie's 81st minute five-pointer sealed a six tries to three victory.

Waratahs captain Michael Hooper said: "The Chiefs scrambled really well and managed to play smart rugby. We’ve shown we were in with a shout right to the end and [have been] with every Kiwi team we’ve played this year. It would have been nice to get that [losing bonus] point there … credit to them.”

Despite the eventual result, Beale was at his inspirational best for the Waratahs. As well as scoring a try, he set up a handful of others in a creative performance that Michael Cheika would have enjoyed a fortnight out from the first Test against Ireland.

Israel Folau continued his hot form with a number of outstanding high ball takes that gave the Waratahs auspicious territory and enough opportunities to come away with the points.

The Waratahs can take solace from the fact they scored more combined points (118) than the four Kiwi teams (106) they have locked horns with in May.

However, the overall picture makes for grim reading. While the 40-game drought might have been broken last weekend, no Australian Super Rugby side has been able to win a match in New Zealand in 31 attempts. The Waratahs' 29-24 victory over the Hurricanes in April 2015 was the last successful outing across the ditch.

Despite the loss, the Waratahs are still clinging onto first spot in the Australian conference. 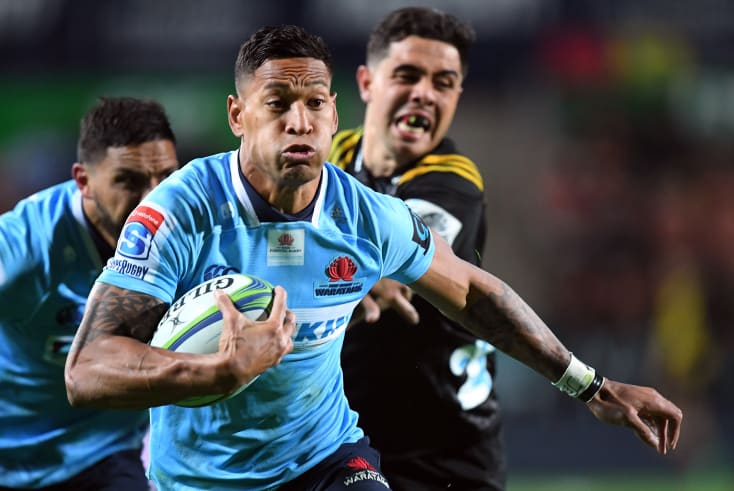 Israel Folau was on song as usual against the Chiefs but the game slipped from the Waratahs’ grasp.

The Rebels’ clinical victory over the Sunwolves may have narrowed the gap but the Melburnians face two New Zealand teams – the Blues and Highlanders – in their four remaining matches.

By comparison, the Waratahs have a slightly better run to the finals with the Reds, Rebels, Sunwolves and Brumbies ahead of them.

Just like against the Crusaders a fortnight ago, Cam Clark scored within the first five minutes for the Waratahs. This time, it was off the back of a first phase, set-piece play which resulted in the winger going untouched down the right edge.

A feature of the Waratahs’ game this year has been their ability to score points from first phases. An astute flat ball from Beale to Curtis Rona, instead of out the back to players licking their lips, put the NSW No.13 into a beautiful hole.

From there, Rona did the rest to ultimately give NSW a 14-0 lead in as any minutes but the Chiefs hit back through Brodie Retallick under the sticks shortly after.

A missing halfback at the base of a breakdown cost the Waratahs dearly near their own line as Nathan Harris made the most of a loose ball waiting to be picked up.

The Waratahs eventually gave up their hard-fought lead in the minutes leading into half-time. McKenzie was adjudged to have planted the ball over the line to give his side a third try in 17 minutes.

Taqele Naiyaravoro’s usually reliable left-hand offload was missing its target as the Waratahs repeatedly gifted valuable possession to their opposition, while the Chiefs’ ability to get over the advantage line swung the pendulum in their favour.

Retallick’s performance over the ball was also nothing short of brilliant. At crucial times, he got the Chiefs out of real trouble.

Folau’s aerial prowess was on show, not for the first time this season. The Waratahs should have scored a try after he plucked the ball out of thin air, save for a forward pass.

There was conservatism, however, on the part of the Waratahs. Instead of keeping the Chiefs scrambling on the back foot, they opted for an easy three points at one stage.

Three minutes later Toni Pulu squeezed through a hole to open up a seven-point buffer but Beale ensured that was short-lived with his first try of the season.

As things got tense in the dying stages, Brad Wilkin finally came on for his Super Rugby debut. Two horrific ACL injuries in the last two years has been a major setback for the young man but he provided reasonable impact despite the result not going the Waratahs' way.