Mark Newnham will look for his second career group 1 with Greysful Glamour in Thursday’s VRC Oaks but will be keeping a close eye on Burning Passion hoping he can surprise him in the Ladies Day Cup at Hawkesbury.

The Randwick trainer shares in the ownership of the topweight in the Ladies Day Cup and had always intended running the seven-year-old in this race given his good second-up record. 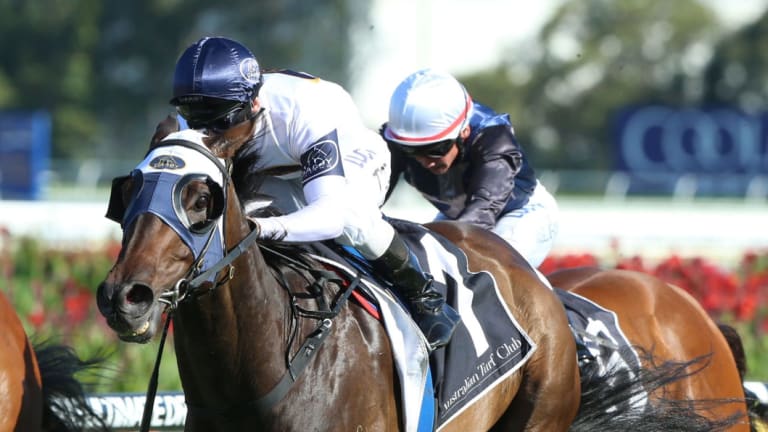 Out to surprise: Burning Passion has targeted the Ladies Day Cup at Hawkesbury on ThursdayCredit:bradleyphotos.com.au

“I planned to get him to Hawkesbury for this race knowing how he improves after a run,” Newnham said. “He had that run in the Sydney Stakes against some real good sprinters and was outclassed on the very wet track.

“That sort of hard run usually brings on his coat through and you look at him and say 'you’re ready to go'.

“But with the weather it [the coat] is not quite there just yet. They don’t usually win when they are like that but his bloods are good, so maybe he can surprise me.”

Newnham had his first group 1 success with Arrowfield-owned Maid Of Heaven in the Spring Champion Stakes during The Everest carnival and a plan to keep the two quality fillies apart will come to fruition on Thursday.

Greysful Glamour was sent to Melbourne on an Oaks mission and she will try to do an Extra Brut in the fillies' classic.

The Stratum filly was dominant in the Oaks Trial at Flemington a month ago before failing around Caulfield in the Ethereal Stakes.

“You look at the Derby winner and he was very impressive at Flemington then disappointing at Caulfield before winning on Saturday,” Newnham said. “Hopefully she can do the same.”

Back at Hawkesbury the Spring Provincial Series continues with its third heat where Bobbing will be looking for a hat-trick this time in.

Trainer Bernie Kelly has decided to take a shot at the rich series with the five-year-old after impressive Class 1 and 2 wins to start the preparation.

“I prefer to err on the side of caution by spacing Bobbing’s runs,” Kelly told Racing NSW. “He might be a five-year-old but is not seasoned yet, hence the reason I have been taking baby steps with him.

“Bobbing likes to settle and work into his races, so the big straight at home is in his favour and he won his first race here in July.”