Edinson Cavani, Kylian Mbappe and Neymar each scored as Paris St Germain overcame Angers 3-1 at Parc des Princes to remain at the top of France's Ligue 1.

Cavani marked his first appearance of the season after recovering from the hamstring injury sustained during Uruguay's World Cup campaign by sliding home an easy opener set-up by Neymar's deflected cross. 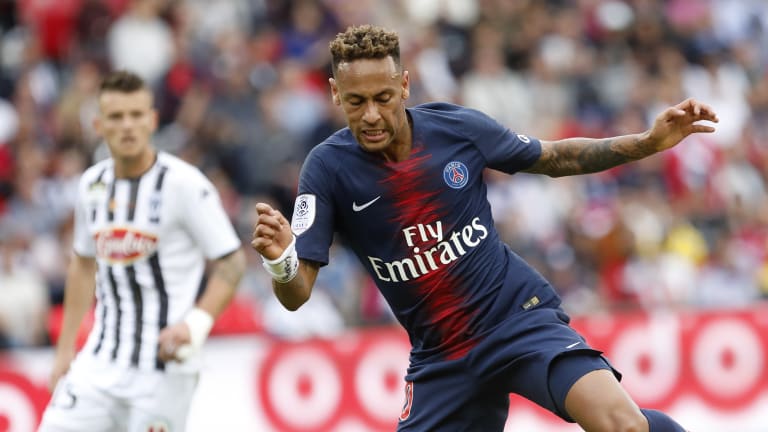 Still leading: Neymar was among the goals in PSG’s victory over Angers.

Angers hit back when debutant Thilo Keh, a STG34million ($60 million) summer signing from Schalke, hacked down Flavien Tait and Thomas Mangani converted from the spot.

Angers have yet to claim a point this season but they defended resolutely against the reigning champions until two superb goals sealed their fate.

Dijon joined PSG on nine points after dispatching Nice 4-0 at Allianz Riviera, although they trail the title favourites on goals scored.

It was a deserved win for the visitors who had to wait until the second half for the breakthrough, which came from Nayef Aguerd before Oussama Haddadi added the second.

Sealing the result was a late double by Jules Keita to complete another fine performance from Dijon.

Nimes also hoped to secure a third win in three rounds of the new season but instead they fell 1-0 at Toulouse to an 81st-minute strike by Max-Alain Gradel.

Five goals and a red card made for an eventful clash at the Credit Agricole de la Licorne Stadium as Amiens clinched their first win of the season with a 4-1 victory over Reims.

Reims were another team with hopes of preserving a 100 per cent start to the season but instead they crumbled before two goals from Senegal striker Moussa Konate and additional strikes by Eddy Gnahore and Saman Ghoddos.

Montpellier and St Etienne fought out a goalless stalemate at La Mosson while Nantes and Caen shared a 1-1 draw.