Here is USA TODAY Sports’ rankings of the NHL playoff teams, based on the likelihood to win the Stanley Cup:

1. Tampa Bay Lightning: If the Lightning win the Stanley Cup, they will likely go down as one of the top teams in NHL history. They won 62 games in the regular season and aren't showing any holes in their game.

2. Washington Capitals: The defending champion Capitals are still a threat to win it all, but the loss of defenseman Michal Kempny to injury creates an alarming crack in their defense.

3. Boston Bruins: The Bruins were 29-9-3 at home this season. Only the Lightning were better. Patrice Bergeron might be the best all-around player in the game.

4. St. Louis Blues: The Blues caught everyone’s attention by recovering from an early collapse to make the playoffs. They were 16-19-4 on Jan. 5 and then have gone 29-9-5 to make the playoffs. Rookie goalie Jordan Binnington (24-5-1 record, 1.89 goals-against average, .927 save percentage) is the key. 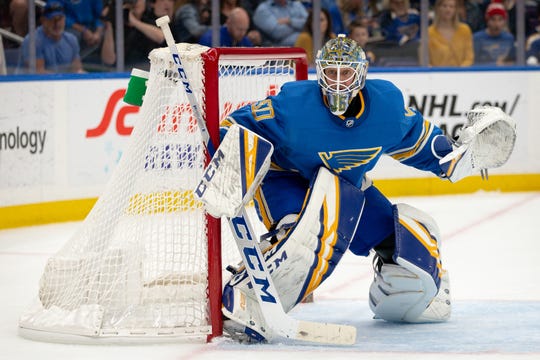 WINNERS/LOSERS FOR NHL PLAYOFFS:Breaking down the field

HOW LIGHTNING WILL LOSE: FIve teams that could knock them off

5. Pittsburgh Penguins: They've advanced to the playoffs every year since 2007, winning three titles in four trips to the Stanley Cup Final in that span. The Penguins’ organization, particularly Sidney Crosby and Evgeni Malkin, understands what it takes to be successful.

6. Nashville Predators: The Predators are mediocre offensively, but they have the NHL’s most talented defense. Pekka Rinne is a difference-maker in net.

8. Vegas Golden Knights: Coach Gerard Gallant’s Golden Knights are difficult to beat in their own arena but they are the only playoff qualifier with a losing road record in the regular season.

9. Winnipeg Jets: They won 47 games this season and didn’t play up to their ability. They are the wild card of the playoff field because they have the talent to win it all.

10. Toronto Maple Leafs: They haven’t improved enough this season to live up to lofty expectations. The Maple Leafs give up too many scoring chances.

11. New York Islanders: They are the No. 1 defensive team and yet it doesn’t seem like they are polished and advanced enough to make an extended playoff run.

12. San Jose Sharks: The Sharks’ NHL-worst .889 team save percentage will hurt them in the playoffs.

13. Carolina Hurricanes: It feels like the Hurricanes are the good karma team. But they are a long shot against the Capitals in the first round.

14. Dallas Stars: Goalie Ben Bishop’s .934 save percentage and seven shutouts helped the Stars overcome their lack of scoring. The Stars were tied for 28th out of 31 teams in scoring average (2.55). That won’t work in the postseason.

15. Colorado Avalanche: Coach Jared Bednar said he is “hopeful" the injured Mikko Rantanen might be ready for the playoffs. But that isn't enough to move the Avs beyond longshot status.

16. Columbus Blue Jackets: The trade deadline deals were not as transformative as the Blue Jackets hoped they would be.