Michael Sam dropped in the 2014 N.F.L. draft compared to most experts’ predictions after he came out as gay earlier that year. Laremy Tunsil slid several spots in the 2016 draft when video of him apparently smoking marijuana surfaced on draft night.

Even if fans may not approve, teams’ aversion to off-field “issues” when deciding whom to select has a certain logic. After all, teams are sensitive to the smallest question marks. That is why prospects are subjected to rigorous predraft examinations in which their 40-yard dash is timed, their intelligence is quantified and their hand size is measured.

A high first-round pick, in particular, is among the most valuable assets an N.F.L. team possesses. Its worth shows up on the field, where it can be traded in for a star player on a relatively inexpensive rookie contract, and off the field, where the young star it is used to select can become the face of the franchise.

Given those high stakes, why is Nick Bosa considered a surefire top-three pick in the N.F.L. draft Thursday night?

Bosa, 21, a talented pass-rusher out of Ohio State, recently deleted several tweets about political and racial subjects. Asked why he had done so, he told ESPN it was in his interest to scrub his social media accounts. “There is a chance I might end up in San Francisco,” he said.

One tweet called Beyoncé’s music “complete trash.” Another described “Black Panther,” a film widely seen as a triumph for pop-culture representations of black people, as the worst Marvel movie. Others reportedly expressed support for President Trump. And Bosa’s reference to the City by the Bay — the 49ers hold the second overall pick on Thursday — apparently alluded to a 2016 tweet in which Bosa called Colin Kaepernick a “clown.”

Kaepernick, of course, is the former 49ers quarterback who protested structural racism and police brutality in the United States by kneeling during the national anthem, touching off a firestorm in which he became a bête noire of Trump’s. Despite Kaepernick’s abilities (he had led the 49ers on a Super Bowl run a few years earlier), he has gone unsigned since he was released. Earlier this year, the league settled a lawsuit filed by Kaepernick in which he had accused N.F.L. teams of colluding to keep him out of uniform.

In the context of Bosa, Kaepernick serves as a useful counterpoint. Kaepernick’s off-field politics constituted a “distraction,” in the word of, among others, the former 49ers great Joe Montana. In 2016, when Kaepernick’s protests began, Commissioner Roger Goodell tut-tutted: “I don’t necessarily agree with what he is doing. We encourage our players to be respectful in that time and I like to think of it as a moment where we can unite as a country.”

Like Kaepernick’s protests, some of Bosa’s tweets were political — even if they represented a different end of the political spectrum. Like Sam’s sexuality, they could be considered a distraction. Like Tunsil’s video, it arguably demonstrated a lack of discretion.

More broadly, Bosa’s situation sits at the bloody crossroads where two of the N.F.L. brass’s largest worries intersect: political activism by players and outspoken views of any sort on social media.

Still, mock drafts universally show Bosa being selected with one of the first picks. In many cases, he is expected to go second over all, to the 49ers, just after the Arizona Cardinals take Oklahoma quarterback Kyler Murray in the top slot.

And several figures with access to front-office thinking agreed Bosa’s tweets would not affect his draft stock. 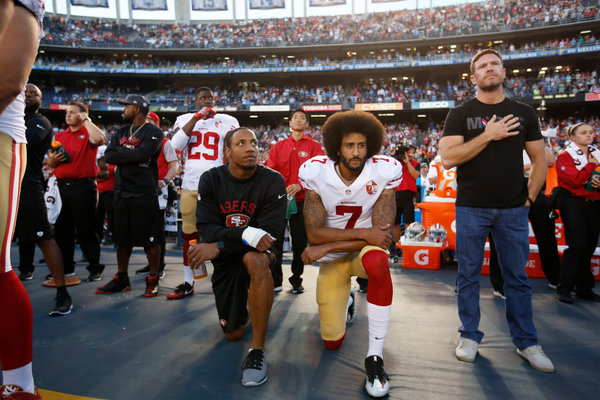 “I can’t imagine a team sitting in a draft room — and I’ve asked teams — saying, ‘We’re going to pass on this guy because he’s left or right wing,’” the ESPN analyst Todd McShay said.

He added, “As long as it’s not something that from a character standpoint is something that is concerning or alarming, I don’t think politics will play into where a guy gets picked.”

NFL Network’s Charley Casserly, a former general manager, agreed. “I always go back to: What would the Patriots do? What would Belichick do?” he said of the perennial Super Bowl contenders and their head coach, implying that Bill Belichick would look past the tweets. “It’s about football — it’s not about politics.”

And indeed, teams do have a long history of prizing talent above all else. Jameis Winston was the top overall pick several years ago because of his Heisman Trophy-winning abilities, and despite a range of character issues that included a rape accusation (he was not charged after an incomplete investigation). Even Tunsil was selected No. 13 over all by the Miami Dolphins — a decision that the team apparently considers wise given that it exercised the fifth-year option on the offensive lineman’s rookie contract.

But in the case of Kaepernick, where it is pretty much indisputable that quarterbacks less talented than he is have received snaps since he went on the market (see: Sanchez, Mark), it feels safe to conclude that his exile was not only about football.

For Ashland Johnson, the founder of Inclusion Playbook, which works with leagues and athletes to spread a message of social justice, the discrepancy between the treatment of Kaepernick and the current expectation about Bosa’s draft stock reflects the different statuses of, on the one hand, a black man who is outspoken about racism, and, on the other, a white man who has called the former figure a “clown.”

“What’s different here is he can erase those tweets,” Johnson said of Bosa. “It has nothing to do with his identity.”

“This is reflecting how society works,” she added. “He deletes them; it’s O.K. But when it comes to people’s racial identity, their sexual orientation, their gender identity, those are things you can’t delete.”

Ultimately, it is difficult to argue that a few of Bosa’s tweets will make anything more than a negligible impact on his future team’s success.

“Behind closed doors in the locker room, people are really tolerant if you’re making plays and treating your teammates with respect,” said Trent Dilfer, a former N.F.L. quarterback.

Players care about winning, the former N.F.L. offensive lineman Geoff Schwartz said in an SB Nation article. And as it relates to winning, Dilfer said, Bosa will be an asset.

Despite ending his college career midway through his junior season, Bosa plays like a pro veteran, Dilfer said, with expert hands, dangerous moves and a sophisticated understanding of opposing offenses.

“What’s going to be really appealing to a franchise — and they will maybe overlook some drama — is the level of professionalism of his game,” Dilfer said.