Nick Kyrgios has spent more time playing against children than against training partners in the past month, but the Canberra tennis star has set his sights on big prizes in the Australian summer.

Kyrgios will resume hitting practice this week as part of his preparations for the Brisbane International, where he will attempt to defend his title from December 30. 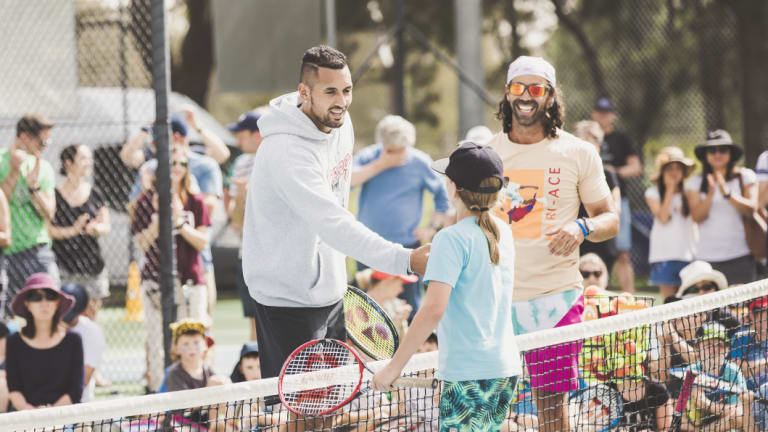 Nick Kyrgios raised more than $5000 for his foundation at a Kaleen tennis day on Saturday.Credit:Jamila Toderas

The world No. 35 has been on limited duties since injury prematurely ended his season in Russia, but he got some target practice and a runaround by some young guns to kick him back into gear.

Kyrgios spent most of the day on Saturday mingling with tennis fans at the Get Set Tennis centre in Kaleen and then playing against the winners of a junior tournament.

Keeping it casual is helping Kyrgios find balance in his life and career. He knows that will change when the season starts in Brisbane, but he's already nominated the Australian Open as his No. 1 target.

"I wasn't really expecting much going into [Brisbane] last year and I won't expect much going there this year again," Kyrgios said.

"I'm just going to go there, play my style of tennis and if I happen to come out on top again, it's great. But if not, it's not so much of a big deal.

"I know there are bigger fish to fry, I'd rather win the [Australian Open] than Brisbane or something like that. Obviously I'd like to defend my title, but it's not life or death for me."

Kyrgios has been working with trainer Ashcon Rezazadeh in Canberra to get fit after an elbow injury forced him to withdraw from the Kremlin Cup in October. 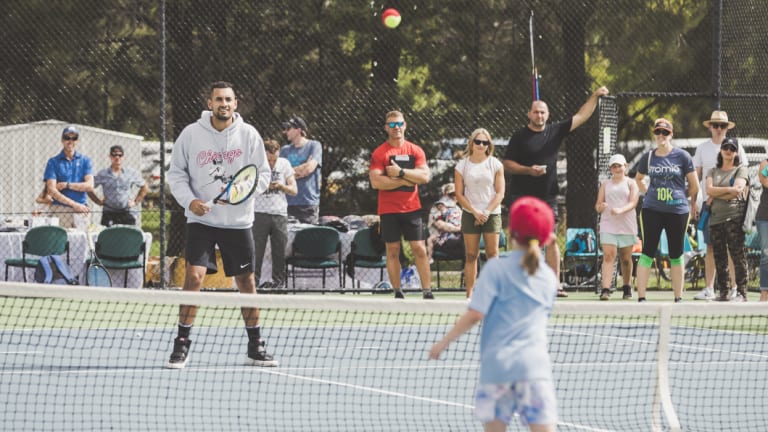 Nick Kyrgios will ramp up training next week ahead of the Brisbane International.Credit:Jamila Toderas

But the unscheduled break and training time in Canberra has given Kyrgios a chance to slow down, reassess and prepare to relaunch for a big 2019 campaign.

He has also had more time to work on his foundation – the NK Foundation – and was the star attraction when 94 children turned up to the Kaleen Tennis Centre for a chance to test themselves against him.

The day raised more than $5000 for the foundation, which will go towards building a facility in Dandenong to help underprivileged youths and give them a safe place to relax.

Kyrgios was also blown away by the story of a woman who turned up after having a bone-marrow transplant.

"I was excited to get out here and to get out with the kids again, to see the smiles on their faces [is great]," Kyrgios said.

"There was a young lady who came down who recently had a bone-marrow transplant. For her to come out to have a hit, she felt up to it and that was pretty special.

"She found out about [her illness] when she started playing tennis, so she couldn't continue. I put a whole bag of stuff – clothes, tennis racquets and everything – and gave it to her. To hit with her was great, I got pretty emotional. It was heart-warming, but it breaks me as well."

The foundation work adds an extra motivation to his tennis work, which will ramp up in the coming days to put himself in the best position to perform at Australian events.

"I've been going pretty hard [but] I haven't really picked up a racquet yet and started hitting," Kyrgios said.

"It was more about getting home and enjoying that, doing more stuff with the foundation. I'll ease into it … I've been doing my own thing. I know it will be hectic in a couple weeks and I'm excited for the Aussie Open, I'll never take a grand slam for granted. You're never guaranteed another one."