Nick Phipps’ drunken bucks party antics, in which he urinated on a bar in a Sydney pub, has let down his club in a big way.

That’s the view of Waratahs coach Daryl Gibson, who said Phipps was an “irreplaceable” club captain whose demotion would be be felt by the entire squad. 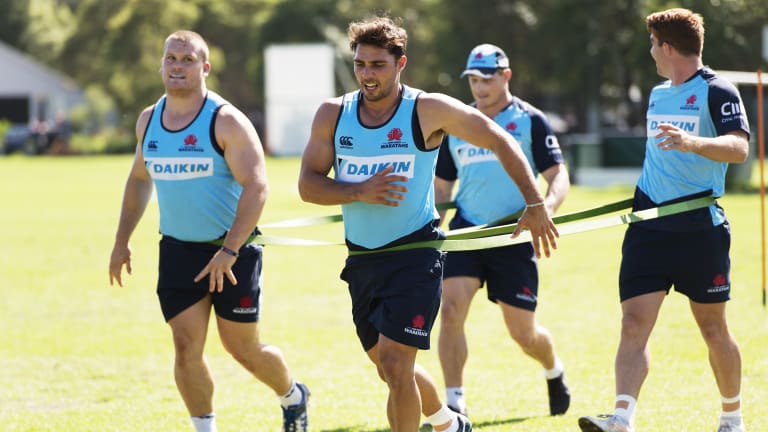 Disappointment: Nick Phipps was stripped of the Waratahs club captaincy after urinating on a bar in a Sydney a pub.

Phipps has been named on the Waratahs bench to face the Blues at Brookvale Oval on Saturday just days after Fairfax Media revealed the halfback’s indiscretion a fortnight ago.

The 29-year-old was fined $4000 and stripped of the Waratahs club captaincy for the time being.

Phipps is one of the most liked and respected players at NSW and has been with the club since 2014 – the year the Waratahs won a Super Rugby title.

The role of club captain was one that Phipps embraced and to have that taken away from him will be an extremely tough pill to swallow.

Speaking on Thursday, Gibson said he did not have a replacement club captain in mind because of how well-suited Phipps was to the role.

“That’s really hurt us around Nick being stood down,” Gibson said. “It takes out a leader and the meaning for us and that decision and the consequences that Nick has suffered has really hurt the team.

“He’s almost irreplaceable there and it’s going to be a big hole for us that we’ve got to fill.”

During the week Phipps said he was a "bloody idiot" and had hazy memory of the moment he was ejected from the Woollahra Hotel on the evening of April 21 for urinating on a bar.

The 61-Test Wallaby was intoxicated and put into a cab by friends shortly after.

The Waratahs insist the incident won’t be a distraction ahead of their match this weekend and Gibson even left the door open for Phipps to be club captain once again down the track.

“It was disappointing what happened last week,” Gibson said. “Nick, by his own admission, behaved poorly and he suffered the consequences. It’s hurt us on a number of fronts and particularly with the absence of his leadership.”

Phipps missed the first seven Waratahs matches with a calf injury that lingered on for longer than he would have hoped.

Now back to full fitness, Gibson’s selections in the last three NSW fixtures indicate starting No.9 Jake Gordon is well and truly ahead of Phipps in the pecking order.

Gordon has been excellent for the Waratahs this year but it will be interesting to see whether Wallabies coach Michael Cheika also believes he is a more reliable option than Phipps.

With Will Genia tipped to remain the Wallabies’ first-choice halfback, it will be a three-way tussle between Phipps, Gordon and Brumbies No.9 Joe Powell for a spot on the bench for Australia's first Test against Ireland in Brisbane on June 9.