On September 1, as the first quarter of the NEAFL elimination final between the Brisbane Lions and Aspley continued on at a frenetic pace Jack Frost sat on the bench in his footy gear unable to see properly.

Moments earlier the Lions' tall defender had run from the ground without even calling for the trainers, having copped a knock while contesting a loose ball with Aspley's Blake Nelis.

Blood was coming from a cut on Frost's head but he could talk and his mind was clear enough for him to realise what this concussion might mean.

"I remember sitting on the bench thinking 'bloody hell, this could be it'," Frost told Fairfax Media.

"It was pretty sad."

As Frost's concerned girlfriend Kazmir Simpson drove him home after the game he told her that because of how he felt they might have to pull the pin, for the second consecutive season, on attending that night's club best and fairest. 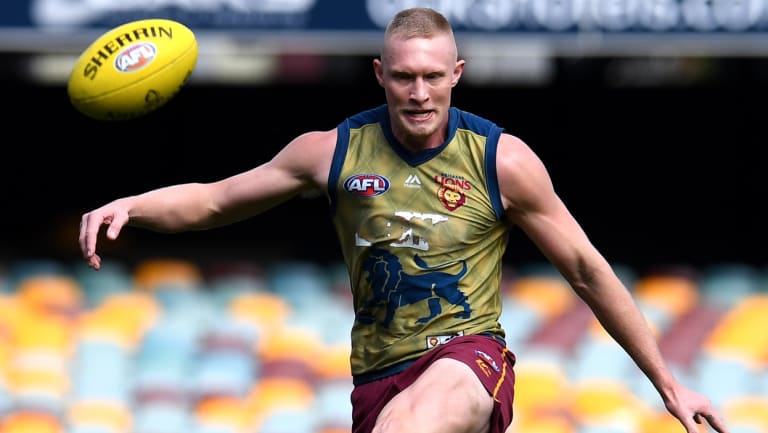 That was the least of the couple's worries, however, as they knew better than anyone what they endured late in 2017 when he was sidelined with concussion.

That Frost made it back to play 18 NEAFL games for the Lions in 2018 was a miracle in itself because the year before had not been pretty.

Frost had been virtually housebound and at times turned into a character his girlfriend found hard to recognise.

"I had headaches all day, felt extremely lethargic, had no energy and did not want to eat because I felt sick all the time. I felt like I was on a ship even when I was on land," Frost said.

Even worse for those around Frost he felt his personality change as his brain struggled to respond to information.

"That was extremely frustrating and made me really short-tempered because I am usually on the ball with everything," Frost said.

During that time Simpson would wake at 3.30am to go to her job as a producer on breakfast radio and return around 12 hours later to a frustrated partner who had felt so unwell all day he was unable to help with even the most basic domestic duties.

Frost's average day during that time was, by his own description, "pretty grim".

In bed early because he easily fatigued, he would often wake in the middle of the night feeling sick, occasionally agitated and nearly always restless.

With Simpson off to work he would eventually wake in an empty house and depending on how he felt he would either eat or skip breakfast before he roused himself to attempt to get something done.

Beginning with something small around the house, he would build his activity levels as his confidence grew, sometimes taking his beloved dog Jagger for a stroll.

More often than not he would be sat back on his bum.

"Things you just take for granted get taken away from you."

Watching TV hurt his head and reading was only possible for small periods.

He mowed the lawn when he could or tinkered with his 2004 white Jeep Cherokee, his love of cars and their mechanics keeping him sane.

He could drive but he was apprehensive about going too far. Being dizzy when driving wasn't fun.

Adding to Frost's frustration was that there was little he could do to make himself better, except rest and wait for the symptoms to subside.

That is anathema to most 20-somethings, let alone elite athletes who have active personalities.

Even when they do endure injury they usually do so with a path to recovery that requires discipline and, at worst, active rest.

But concussion is not like other injuries so Frost, a person with a likeable, enthusiastic personality when feeling OK, was told to sit it out.

"I couldn't even interact socially because everything would just annoy me,'' Frost said. ''I was always a very social person so when things like that annoy you, it annoys you even more because I was like, 'what is happening to me?' "

He received care and advice from the club's medical staff, consulted concussion experts and his dietician and moved back to Melbourne for a time to stay with his family. There was no point being around the club much as he couldn't make much of a positive contribution.

It helped to touch base with Melbourne midfielder Angus Brayshaw, who recovered from a series of bad concussions to finish third in the Brownlow Medal in 2018 and plays alongside Jack's brother Sam at the Demons.

Brayshaw told him to let nature take its course, which calmed Frost down a touch.

"He told me that if you don't feel right, don't do anything," Frost said.

"There is no point trying to tough it out when it is clearly pretty bad."

The 26-year-old was also on edge because he felt like his career was slipping away and he might be letting down those who had recruited him to the Lions.

"I had been told I was going to get better but it is very hard to see the light when you are that way," Frost said.

At the end of 2017 Frost began to recover enough to return to running in the Lions' pre-season and then do non-contact training before seeing a specialist to get clearance to engage in full training.

The approach from the Lions was to bring him along quietly but all parties remained hopeful he would be back competing in his inimitable style.

He played his first NEAFL game in mid-April and in round 15 was named on the Lions' extended bench after a vicious blow from Jeremy Cameron concussed Frost's teammate Harris Andrews.

It was a sign things were on the up for Frost who never got to show his best in Lions colours after an impressive start to his career at Collingwood, where Magpie supporters will remember him forever for his stopping job on Buddy Franklin in 2014 and his effort on Anzac Day in 2015, when he kept running off his direct opponent to spoil free Essendon forwards.

He missed selection in that round 15 game but plugged away in the NEAFL before the incident in the elimination final put him back on the treadmill of specialists and advice and his mind was flooded with unwelcome emotions.

Discussions began to progress about what his future might look like but he was reluctant to give the game he loved away. In the end he knew he had no choice.

"It got to the point with the last one where I thought it's not really worth fighting it any more because things happen and you could be pretty damaged for the rest of your life. It's not worth it," Frost said.

Now his name is on the growing list of players forced from the game through concussion with Koby Stevens, Justin Clarke, Matt Maguire, Leigh Adams, Jack Fitzpatrick, Sam Blease and Sam Shaw all citing concussion as the reason they retired.

Western Bulldogs star Liam Picken is training in the hope of returning but he still gets occasional headaches as he works towards resuming contact.

The issue is not going away and the AFL continues to work on how to make the game safer with footage to help with concussion diagnosis to be available at all AFLW games in 2019 and protection of the head and concussion protocols constantly monitored.

Frost is one of the unlucky ones but he doesn't feel bitter, more a sense of resignation about what happened.

He is happy to share his tale in the hope it builds awareness of what it is like for those recovering from concussion and, particularly for those closest to them as they move into the next stage of their lives.

What's next remains uncertain but he is determined to have a break to ensure the headaches disappear and the old Frost is around every day.

What he does know now is that he is resilient and he has his whole life ahead of him.

"Even talking about it makes me a little bit emotional. It was tough. It is not how you want to end because you always hold on to a bit of hope because we are competitors and we want things to get better," Frost said.

They will now. But it's been a tough time, far away from the glamorous side of AFL football.