Jake Lever insists there's no bad blood with the Adelaide Crows from his "hasty" departure.

The prized Melbourne signing fronts against the Crows for the first time since he left the AFL club after Adelaide's grand final loss. 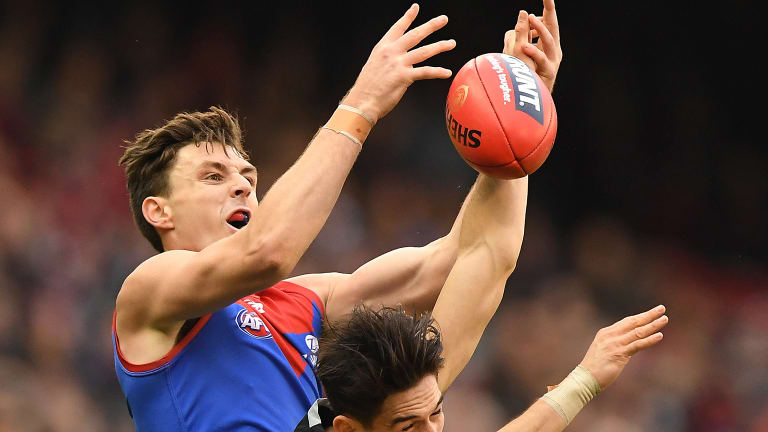 Jake Lever flies for the grab during the Demons’ 109-point win over the Blues on Sunday.

"I think at the start it was always going to be pretty hasty in terms of leaving the club, especially after the disappointment of the year," Lever said.

"Now we have all moved on.

"We're in an industry where players move all the time.

"It's just going out there and playing footy."

Adelaide ruckman Sam Jacobs said he wasn't among any Crows to hold a grudge against Lever, whose exit upset captain Taylor Walker among others.

"You have to speak to the individuals mixed up in that," Jacobs said.

"But for me, he made the decision he did and that's the way it panned out. It's just the way footy is.

"Charlie Cameron decided to leave to go to Brisbane as well, we got Bryce Gibbs and Sam Gibson in.

"For me, it's just the landscape that footy is. All sports are like it now."

Lever's encounter with his former teammates comes on neutral turf in Alice Springs, though he is scheduled to play in Adelaide in round 19.

"It will be interesting up in Alice Springs, there won't be the whole crowd booing me – but I'm sure in round 19 that will come," he said.

"Super-excited to come up against the old side. It has obviously been circled in the calendar for a while now."

While Lever was at pains to "not to make the week about myself", Adelaide's Jacobs said the Crows had quickly covered the on-field loss of Lever with the emergence of 21-year-old Tom Doedee.

"He has been unreal … it has been a pretty seamless transition," Jacobs said.

Both the Demons and Crows are 6-3 entering Alice, with the Crows hoping midfielder Matt Crouch can press for a recall from a hamstring strain for Sunday's game.

Crouch missed Adelaide's wet-weather win against the Western Bulldogs because of hamstring soreness.

The Crows have a nine-day span between games but will again be without captain Taylor Walker and vice-captain Rory Sloane.

Walker has started a two-four week spell on the sidelines to recover from a series of niggling injuries while vice-captain Rory Sloane continues recovery from a foot injury.