Geelong coach Chris Scott says the Cats have no excuses for failure as they attempt to win an AFL premiership from eighth spot on the ladder.

Scott, who guided Geelong to the 2011 premiership in his first year in charge, is bullish about his side's flag chances, declaring his midfield is performing as well as it ever has during his tenure. 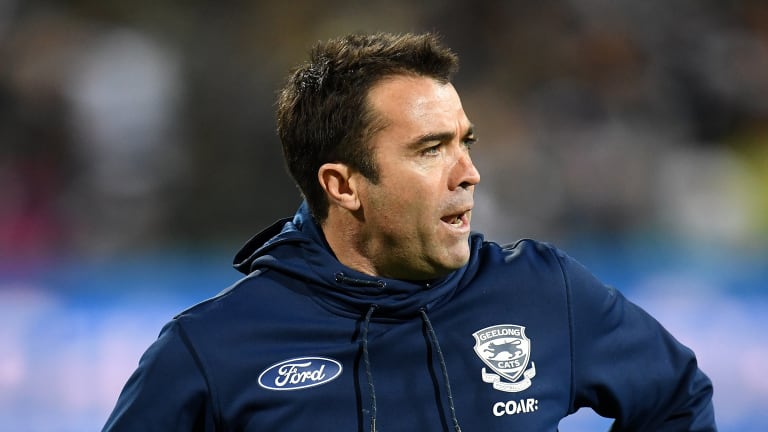 Chris Scott thinks the Cats have found their form.

The Cats didn't lock down a finals berth until the last round of a stop-start home-and-away season in which they never really managed to get up a full head of steam.

They snagged eighth spot with 13 wins ahead of a chasing pack of four clubs with 12 wins, but Scott feels his team is well placed for a flag assault.

"If we don't play well it won't be because we're not in good form or we haven't got good availability or we've got guys who are hobbling back from injury," Scott said on Fox Footy's AFL360 on Monday night.

"We're going in with a healthy list … if we lose we'll just get beaten by a better team on the day. It won't be because we're wrong about how well we're going at the moment."

The Cats will play fifth-placed Melbourne in an elimination final at the MCG on Friday week.

The Demons finished the regular season as the No.1 team in contested possession, hitouts and tackles, with spirited wins over fellow finalists West Coast and GWS.

On the other hand, Geelong thrashed strugglers Fremantle and Gold Coast by more than 100 points in their past two games at their home fortress at GMHBA Stadium.

"We just needed to find our best footy and I think we've done that," Scott said.

"We'll have a good crack at [Melbourne] … I think our midfield is going as well as it has since 2011, in my time. We've got good depth in there and the guys are in good form.

"They're a really high-quality team and the game will be dictated by how well the midfields go."