No Longer a ‘Tigress,’ Amari Avery Will Try to Make Augusta Roar

It’s been eight years since Amari Avery made her first “splash” — her word — in golf. A 2013 Netflix documentary on elite grade school golfers introduced an 8-year-old Avery cruising her Riverside, Calif., street on her bike, pink handlebar streamers blowing in the wind, as Notorious B.I.G.’s “Going Back to Cali” blared in the background.

What “The Short Game” showed came to define the perception of Avery on the junior golf circuit. Much of the documentary centered on how her dad, Andre, had appointed her “Tigress” after she won a junior world championship at 6 years old and was trying to navigate the expensive territory of junior golf by following Earl Woods’s handling of Tiger. Amari’s story arc in the film ends with both her and her father in tears after a disappointing finish at the United States Kids Golf World Championship.

Now 17, Amari Avery will roll down Magnolia Lane with the chance to make a different splash at golf’s most recognizable venue.

“It’s definitely going to be slightly overwhelming,” she said of walking out onto the course at Augusta National, where she is one of 85 invitees to the Augusta National Women’s Amateur. “But I think that me just being there could be inspiring for girls like me. I’m going to be out there to play for myself and just show people that people like me can be out there, we can be at that high level and play.”

That venue’s history with both African-Americans and women — an African-American man did not play in the Masters Tournament until 1975 and the club did not add its first two female members, the former secretary of state Condoleezza Rice and the financier Darla Moore, until 2012 — is not lost on Avery. The daughter of an African-American father and a Filipino mother, she is one of a scant few Black female golfers on either the amateur or professional levels of the sport.

“I didn’t think that I would see any woman playing competitive golf at Augusta National,” said Renee Powell, who in 1967 became just the second Black woman to join the L.P.G.A. Tour. “Let alone a Black woman.”

Powell never had the opportunity to play Augusta National and emailed its chairman, Fred Ridley, to commend him for hosting the women’s amateur event, first played in 2019. As the captain of the United States team for this year’s Junior Solheim Cup — which pits the 12 top young amateurs in the United States against their European counterpoints — Powell monitors the top junior women’s players and occasionally checks in with Andre to keep tabs on Amari’s development.

“She seems to be the real deal,” Powell said. 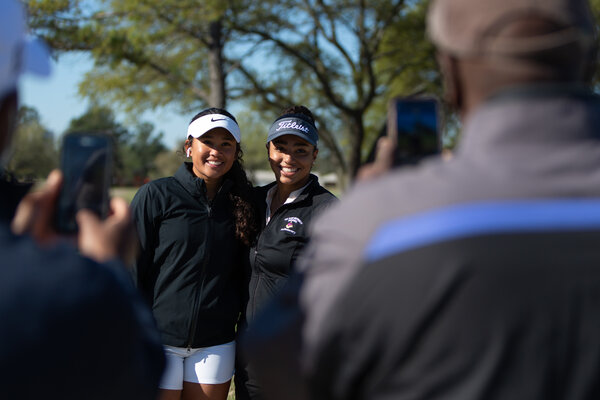 This is just the second edition of the Augusta National Women’s Amateur, following the event’s cancellation last April in the earliest months of the coronavirus pandemic. But even Avery’s invite does not guarantee that she will spend much time on the hallowed course. She’ll play a practice round there early in the week but because the tournament’s first two rounds are held at the nearby Champions Retreat, Avery will need to make the cut to play on the course where her idol, Tiger Woods, has made so much history.

“I couldn’t even imagine what it would be like getting to play Augusta National,” Avery said in her typically deliberate and measured way. The final round of the amateur tournament will be played in front of a limited number of patrons, just like this year’s Masters, and broadcast by NBC Sports. “Obviously being the only Black person there, hopefully I can do something out there and make some upsets, some roars.”

She’s ready to make a mark on golf on her own terms, a far cry from the reputation the Averys earned in the Netflix documentary, that of a helicopter dad and his prodigy, driven by pressure to win rather than fun.

“We want to speak it into existence,” Andre cut in. “We’re going to play Augusta in the tourney. That’s going to happen.”

To get to this point, Amari chased Woods’s ghost around California’s junior golf circuit and her own household. Andre tried to follow Earl Woods’s book “Training a Tiger” to the letter, compelled in part because Amari and Tiger share the same birthdays, were born in the same county, have similar mixed-race backgrounds, made holes-in-one on the same course, and both won junior world championships around the same age. Andre even once entered her into a junior tournament as “Tigress Avery.” He says it was a joke after being egged on by a friend and he quickly chided himself when there was confusion in scoring over her name.

But Amari has not faded against the comparisons even as a Tiger-inspired wave of young golfers failed to crest. She won the prestigious 2019 California Women’s Amateur Championship. In her debut at the U.S. Women’s Amateur, she made it out of the cutthroat stroke play portion of the week and then advanced to the round of 32 in match play. She has won on the Cactus Tour, a women’s mini circuit with fields full of professionals. Last August, she verbally committed to join the powerhouse women’s golf program at the University of Southern California in 2022.

The Averys credit her mother, Maria, as the one who makes the family golf pursuit possible, keeping an eye on the pressures and costs and serving as the final judge of when to pull the plug if either mounts. Andre can remotely work as an information technology consultant while on the road with Amari and Alona, 14, also a highly rated junior golfer. Of her four siblings, Amari is closest to Alona, who was on the bag for Amari’s debut U.S. Women’s Amateur last summer when big sis posted a calamitous 40 on the front-nine of her opening round, but steadied herself to rally for the second-best score of the second round to easily make the match play bracket.

To balance her own drive against the disappointments that can come during a tough round, Amari worked with Jay Brunza, a psychologist whom she credited with steadying her mental approach ahead of last year’s women’s amateur. “He was saying, ‘Stay stable out there. Just try to hit fairways and greens,” Amari recalled. “He tells me a whole bunch of different things that help out. You can go out there and shoot a 40 and the next nine a 33 and you’re not out of it.”

It helps that Brunza worked with teenage Tiger Woods, caddying for him during all three of Woods’s men’s amateur titles.

Andre will be on the bag for Amari at the Augusta National Women’s Amateur, hoping to make a different impression than when he cursed during arguments with Amari when she was 8, and was depicted as the “mean parent,” a portrayal he admits was fair.

“It’s not me wanting to caddie because I want the spotlight,” Andre said. “It’s all the stuff we’ve gone through. Now it comes full circle. I think that’s the best way for us, with her going off to school next in a few months for us to play in this thing together.”

“Training a Tiger” was published in 1997, well before the full impact and collateral costs of Earl Woods’s approach on his son could have been known. But for a nonwhite parent-prodigy team navigating junior golf, the Woodses’ account was the primary road map available to the Averys.

Still, Andre said he’s learned to grow along with Amari. He’s given up on the “Tigress” nickname, stopped trying to impose elements of Tiger’s swing onto Amari and yielded to a coach’s instruction. Before Amari’s 2019 California Women’s Amateur title, the team went through a revolving door of swing coaches, so many that father and daughter lost count.

“We were just kind of bouncing around trying to find that one key thing that will turn things around instead of just trusting a process and letting it handle itself,” she said. “I had just come to the understanding that things aren’t going to come fast all the time.”

Amari has learned to push back on her father, too. “When we’re out there on the course and I’m struggling or I’m working on something and he’s trying to constantly tell me to do something, I’m like, ‘Dad, get off. I just want to do it myself.’”

Both Averys have confidence that she could be a potential superstar on the L.P.G.A. Tour, and has the Tiger trifecta: entertaining golf, winning golf, and a marketable persona. Andre will still admit to his belief in a bond with the Woodses. “We’re so tied to that Tiger Woods-Earl Woods thing,” he said. “There is a connection, I truly believe. It is divine.”

As Amari has grown, she’s improved her approach to golf and managing the relationship with her most ardent fan. Whatever stigma Andre may carry, he is a parent who has committed substantial time and money for instruction and travel to keep Amari progressing in the game.

Those required resources are still a massive challenge to diversifying the game. The Averys are often the only Black family at high profile amateur events, just as they were on the junior circuit, just as Earl and Tiger Woods were.

“I just don’t feel like there’s much of a push for them to be out here,” Amari said, adding, “that’s kind of what I want to bring into the game a little bit, influence some of these kids that look like me, like ‘Hey you can be out here. You can make a splash out here.’”

She has been watching video from the 2019 Augusta National Women’s Amateur and traveled to Augusta for the first time in her life in early March to play the Champions Retreat course. Just days before she left, Andre discovered in conversation with the father of Zoe Campos, who finished in a tie for fifth in 2019, that Champions Retreat was actually a 27-hole facility. He needed to figure out the 18-hole routing on which they would play the event. There was scouting work to do in the final month.

Like all teenage athletes during the coronavirus pandemic, Amari’s schedule and prep work has been abnormal. She said it’s been slow since a quick run of high-profile amateur events last summer. This year she made a few starts on the Cactus Tour, showing well and finishing runner-up in a February field with both pros and amateurs. In late March, she went to Houston and cruised to a win in the inaugural Mack Champ Invitational, an event for junior golfers from diverse backgrounds started by Cameron Champ, one of the few Black players on the PGA Tour.

The Averys met Lee Elder, the first Black man to play in the Masters and an honorary starter for this year’s tournament, but they have never met Woods. Amari dreamed of one day meeting — and maybe beating — him, figuring a chance meeting at Augusta would probably be the closest she was going to get.

Then when she first learned of his February car accident, she had what she termed a “Kobe moment” and feared the worst. “I don’t even know if I could keep playing golf,” she said, considering the worst case scenario on the day of his accident. “He’s been the main guy that’s driven my entire career,” she added. “I’ve been compared to Tiger and I kind of want him to see my career grow and see it progress.”

A visit to Augusta National is a significant milepost in that progression, but the Averys have distinct memories and associations with the course and the Masters, especially when it comes to Woods’s history there. Andre has imparted lots of it via YouTube clips, but Amari’s first real opportunity to closely watch Woods dominate in real time was during his historic 2019 win.

The Augusta National Women’s Amateur gives her a chance to make history of her own at the club.