When Ewan’s name was missing from the eight riders picked for the Tour, there was a chorus of protest from his supporters; especially after the team released a statement in December saying the sprinter was certain to make his Tour debut this year. 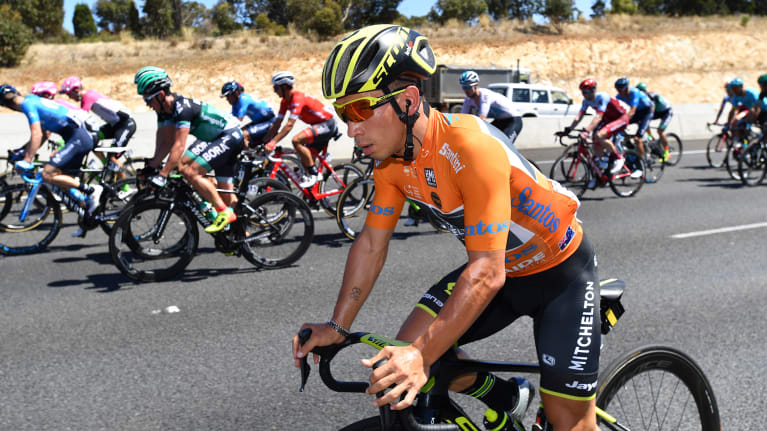 Left out: Sprinter Caleb Ewan was assured a place in the Tour in December, but was left out in the lead up to the race.

When the team's final selection was announced in June and did not include Ewan, Mitchelton-Scott said their focus was on picking riders who could boost the chances of British teammate Adam Yates making the podium.

Not on the agenda was the pursuit for stage wins, especially in bunch sprints, for which Ewan, 24, would have been best suited.

However, with a week left in the Tour that has changed, with Yates well out of podium contention and sitting more than 36 minutes behind Tour leader Geraint Thomas (Sky) before stage 14 on Saturday.

Mitchelton-Scott is now racing for stage victories wins as the Tour heads across France and through the Massif Central and the Pyrenees before finishing on the Champs Elysees in Paris next Sunday. 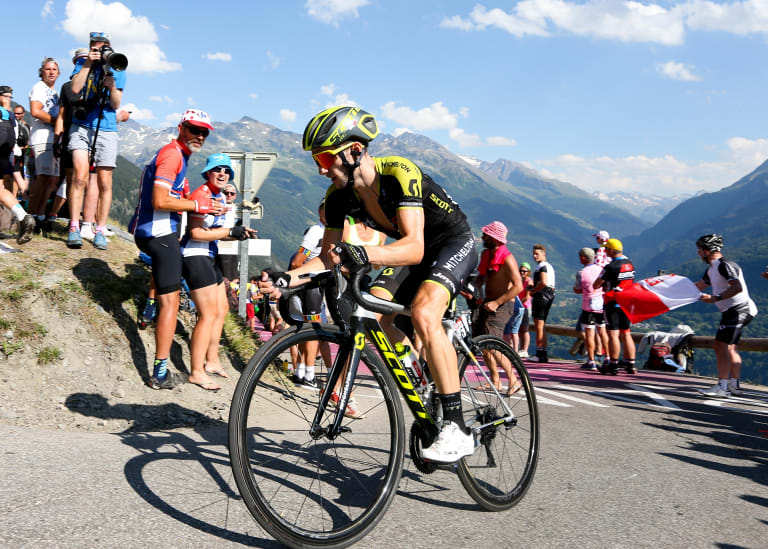 Struggling: Adam Yates is well out of contention for the yellow jersey.

"I picked the best team for what we are trying to achieve here, and I am confident we picked the best team," White said. "We can’t have a crystal ball in sport, but I wouldn’t change my decision at all. We came here for climbing and general classification. Now GC is off the cards. We have three very good climbers here."

Friday was not a day for the climbers though, but the sprinters that are still left in the Tour. Raced in 30-degree-plus conditions, the stage was won in a bunch sprint by world champion Peter Sagan (BORA-Hansgrohe) from Alexander Kristoff (Team UAE Emirates) and Arnaud Demare (Groupama-FDJ).

The stage saw no change in overall placings apart from the non-start of 2014 Tour winner Vincenzo Nibali (Bahrain-Merida) who fractured his L10 vertebrae in a crash with four kilometres to go on Thursday. Thomas leads by 1 minute, 39 seconds from Chris Froome (Sky) in second, 1.40 from Tom Dumoulin (Team Sunweb) in third, and 2.46 from Primoz Roglic (Lotto-Jumbo) in fourth.

No one will know how Ewan would have fared had he raced this Tour. It would certainly have been a punishing entry to it though, judging by the calibre of sprinters who have already left the race.

In two of the last three days in the Alps, marquee sprinters who left the race were Mark Cavendish (Dimension Data) and Marcel Kittel (Katusha-Alpecin) on stage 11 after finishing outside the time limit, and then Fernando Gaviria (Quick-Step Floors), Dylan Groenewegen (Lotto-Jumbo) and Andre Greipel (Lotto-Soudal) who all abandoned during stage 12 to l’Alpe d’Huez knowing they were going to miss the time cut as well.

There is no place to hide in the Alps when you are a sprinter.

Asked to explain the toll taken on the sprinters, a talent pool that was regarded as the deepest in decades when the Tour began, White said: "It’s been an incredibly stressful first nine days".

"Then they are thrown straight in to three of the toughest stages of the Tour [in the Alps]. The sprinters put so much nervous energy into trying to win early, then they get battered on the Roubaix stage [on the cobblestones], had a rest day – and sometimes it is better not to have a day off – then they went straight into the Alps. They haven’t recovered. A couple came here in far from perfect conditions as well.

"There is no place to hide in the Alps when you are a sprinter."

"Yeah certainly," Bannan said when asked. "It was not the correct thing to do, putting a statement out so early when so many things can happen. Sport, particularly at an elite level, is pretty dynamic.

"It was made purely on his progression, but made too prematurely."

Asked if the team would now not release such a statement in the future, Bannan said: "We would put a clause in there, 'subject to…'

"What we say six months ago, is sometime not applicable to [now]."

Meanwhile, Mitchelton-Scott remained committed to targeting the 'transitional' stages from the Alps this weekend as opportunities to get riders into breakaways; while their climbers recover for the Pyrenees which the peloton will tackle after Monday’s rest day.

In the final three mountain stages, the team will look to Yates to try his hand for a stage win, as well as Spanish teammate Mikel Nieve.

Nieve nearly jagged a win on stage 11 on Wednesday to La Rosière, but was caught with the finish line in sight by Thomas. Another climber who should get his chance is Australian Damien Howson who, with Nieve, was selected as a wingman for Yates.

White said Yates’ massive time loss on Thursday’s 12th stage to l’Alpe d’Huez was because: "He wasn’t recovered from the day before.

"So we made a plan to get off 'GC' and set new targets. We didn't come here to ride for 20th [place overall], so we hope we are now given the freedom to go in breakaways when he has recovered."

Tough day in the saddle for all, but suited for breakaways. The overall contenders will still need to be on their toes on a day with three categorised climbs before a tough 3km ascent at 10 per cent gradient to the finish. If it’s hot, as is likely, this will test the peloton.

Ideal for a breakaway, and for those who make it, the fast finishers among them who can climb. For the pure sprinters still in the Tour the route should be too hard, with three categorised climbs before the finish. The last climb is the 12.3km Pic de Norre, after which the last 40km kilometres is a mixture of false flats and undulations.