In this game there are a few people whose opinions you instinctively value as you know their views will be courageous, well thought out, and always informed.

Fairfax’s Greg Baum and the ABC’s Tracey Holmes are two cases in point. I admire them both, but have never seen them more opposed on an issue as they are on the case of Serena Williams’ meltdown at the US Open. 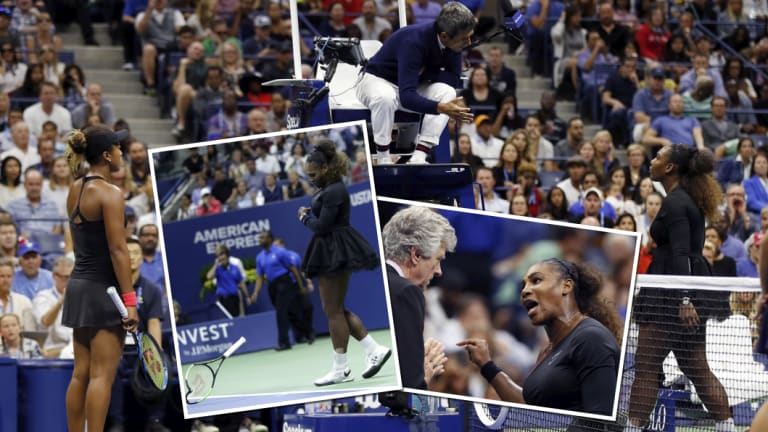 Here is a quick burst of Baum’s reaction: “Serena Williams lost, massively … In her outbursts, she invoked sexism and, implicitly, racism, and so managed to set back both those momentous causes. Williams … is now just about the most privileged black woman in the US, the most indulged, too. It makes it hard to buy the interpretation that this was some sort of stance against oppression. And it obscures the mighty, desperate and real battles that are being fought around the world in the name of both …”

He went on to quote Williams' insistence that, because “I have a daughter and I stand for what's right for her”, she had to protest as vociferously as she did.

“So,” Baum points out, “when her now infant daughter one day perceives a slight, throws a tantrum, smashes up some expensive toys, calls her mother a thief, demands an apology and says that she will see to it that Williams play no further role in her life, she will applaud her for being a strong woman, yes?

“No. Williams managed even to make a motherhood statement into a loser.”

Baum goes on to list Williams’ form, including a couple of vicious fights with umpires and line officials, the latter which included physical threats.

“Doubtlessly, as what felt like a conspiracy rose against Williams in the final, and she invoked sexism and racism in her protests, then twisted it into some sort of stance on behalf of her child, meantime demonising an umpire, traumatising a new champion and turning her stage into gallows, she was only lashing out. It would not be an excuse for a 16-year-old; it is certainly not one for a 36-

Well, the redoubtable Tracey Holmes does disagree, and strongly.

“Serena Williams was treated unfairly at the US Open final against Japan's Naomi Osaka by chair umpire Carlos Ramos. It was a case of double standards . . .

“Williams did break the rules, and she suffered the consequences. But the point she argued was that the same rules are broken at every tournament without those same consequences being meted out. It's a perfect example of double standards.”

The culprit for Holmes was the ump, Ramos, saying that while he is one of the most experienced umpires on the tour and a known “stickler for the rules”, he “should ‘stickle’ for every player equally. If he did, Williams would not have had a leg to stand on.”

Holmes maintains that “Rafael Nadal, Novak Djokovic, Murray and Nick Kyrgios have all had their moments with the umpire”, and goes on to list some notable atrocities including Novak Djokovic accusing him of “losing his mind”, and our own Nick Kyrgios calling one of his decisions “f–ing bullshit”, neither one of which drew a game penalty.

It was an unfortunate occurrence with so many nuanced causes it is absurd to think you could wrap it up in even a dozen columns.

She movingly writes of the racism that Williams has faced growing up, with her sister Venus being referred to as “Blackie 1” and “Blackie 2”, when they first started to compete and having the N-word yelled at her when she first started to win. Her theme is that for those of us who have never faced anything remotely like that level of appalling treatment because of the colour of our skin, who have not been on Williams’ journey, it is impossible to understand all the factors that went into that meltdown.

You get the drift. Both fine writers make compelling arguments, which are, nevertheless, diametrically opposed to each other.

Me? I am going to go with Julia Gillard!

I say the same of sexism and racism as applied to the Williams meltdown. There is no right or wrong answer. It was an unfortunate occurrence with so many nuanced causes it is absurd to think you could wrap it up in even a dozen columns.

Happily, however, the way forward is not so hard to see.

For as Baum points out: “Of the major sports, it is the most licentious, its players the most pampered. It is not strictly true that men get away with murder – almost 30 years ago, John McEnroe was defaulted out of an Australian Open after a Serena-like hissy fit – but it is true that tennis players are given the range of spoiled brats, literally spoilsports.”

The way forward, thus, is to tighten the leash, for all umpires to act like Ramos did to Williams, to bring all misbehaving players quickly to heel regardless of fame, gender, race, abilities, situation.

Let them study the way golf does it. Somehow, despite being a powerful global sport, their players, by and large, behave impeccably – right to the point of turning themselves in, when they think they have transgressed the rules. Golf proves that it is possible for big-time sports people to behave well and in its case even when it is fundamentally self-policed.

Tennis must insist that its rules are obeyed by all, that the umpire be treated with elaborate respect, and that from now on even mini-tantrums on court will be greeted by an overhead smash from the umpire’s chair to beat them all!