Noah Syndergaard became the first pitcher in 36 years to homer and throw a shutout in a 1-0 victory, lifting the Mets over the Cincinnati Reds on Thursday afternoon.

Syndergaard (2-3) struck out 10 and allowed four hits in his third career complete game, shaking off a sloppy start to the season with a do-it-all effort. He became the first Mets starter to get an out in the eighth inning this season, and the franchise’s first starter ever to hit a home run in a 1-0 complete-game win.

Syndergaard, whose nickname is Thor, did his hammering in the third inning, driving a ball 407 feet to the opposite field in left-center off Tyler Mahle (0-4).

The previous pitcher to homer in a 1-0 complete-game win was the Los Angeles Dodgers’ Bob Welch against the Reds on June 17, 1983, according to the Elias Sports Bureau.

The Reds’ leadoff hitter, Jesse Winker, got an earful from Mets fans after waving tauntingly at the Citi Field faithful after a pair of victories earlier in the series. Winker was booed before his first at-bat and waved at sarcastically by fans after striking out in the first and sixth.

Jeers peaked in the ninth when Winker was ejected arguing balls and strikes with the plate umpire Marty Foster. Kyle Farmer replaced Winker and struck out looking, with the punchout going on Winker’s record. 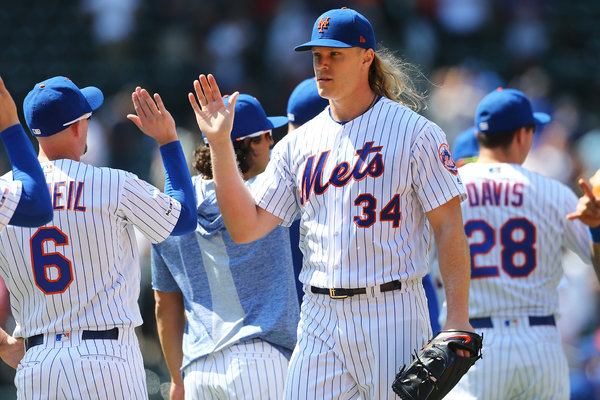 Mahle delivered five solid innings, with the only damage coming on Syndergaard’s strike. Mahle struck out seven with four hits and no walks.

The Reds entered with 99 runs allowed this season, tied with American League East-leading Tampa Bay for best in baseball. They allowed one run over the final 18 innings of the series.

Syndergaard came in with a 6.35 earned run average. His velocity picked up a tick from where he had been this season, topping out at 99 miles per hour, and he bailed out a well-worn bullpen with an efficient effort, throwing 74 of his 104 pitches for strikes.

It was just the third complete-game shutout in the majors this season, after Colorado’s Marquez and Texas’ Mike Minor.

Syndergaard’s second homer this season was the sixth of his career, tying Tom Seaver for second among Mets pitchers, one behind Dwight Gooden’s team record.

New York entered with three homers from its pitching staff — including one each from Jacob deGrom and Zack Wheeler — which was tied with Arizona for the major league lead. The Mets’ four homers matched the franchise season record set in 2016.

Syndergaard’s shot was the 11th homer by a pitcher in the majors this season, a pace that can easily surpass the 34 such drives in 2003 for the most since the introduction of the designated hitter in 1973.

Syndergaard got a standing ovation after hitting a fly ball to deep center field in the eighth.

Robinson Cano singled in the first inning for the 2,499th hit of his career.