The AFL will introduce a Victorian heavyweight club to play North Melbourne in next year's Good Friday timeslot, with Essendon firming as their opponent.

Richmond is the alternative club under consideration, but St Kilda will not be given another opportunity after kicking just two goals in the first half of this year's game, going on to lose to the Kangaroos by 52 points. 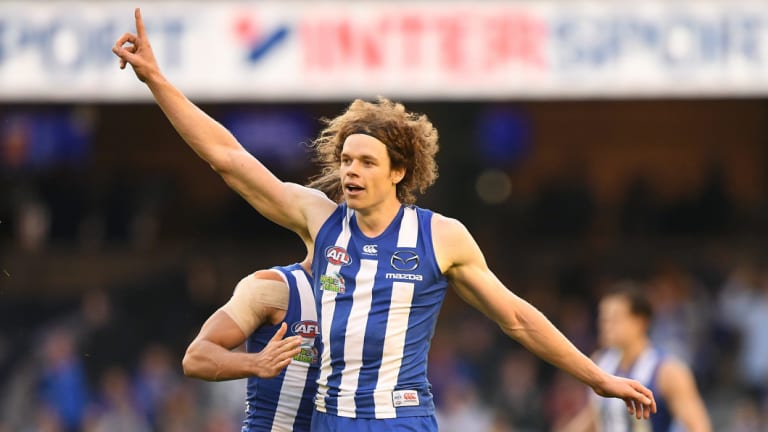 Ben Brown booted six goals in the Kangaroos’ Good Friday thumping of the Saints in 2018.Credit:AAP

Given that Anzac Day will fall six days after Good Friday, having either Essendon or Richmond, who will be involved in Anzac Day and Anzac Day eve clashes, makes sense in regards to breaks in between games.

Because Richmond will play Melbourne on the Wednesday night (Anzac Day eve), it seems more likely for both those clubs to play on Saturday and therefore have equal breaks, as opposed to Richmond playing on Good Friday and then having an extra day off.

It means Essendon is in the box seat to play in the marquee match against North.

The AFL and host broadcaster Channel 7 are keen to see North play a high-profile team with a large membership base to build the game into an annual event.

Easter Thursday football at the Gabba will also return in 2019, with Brisbane to host Collingwood in what will be Dayne Beams' first game against the Lions since becoming a Pie again.

Next year's AFL fixture, which will be released in full on Wednesday, will see the Lions kick off round five against the Pies, in what used to be a regular fixture between the two clubs in the early 2000s.

The Lions hosted Easter Thursday football at the Gabba in 2010 against Carlton, against St Kilda in 2011, Carlton again in 2012, and Richmond in 2014.

The 2017 grand final rematch between Adelaide and Richmond was fixtured as this year's Easter Thursday clash, while West Coast played Sydney on Easter Thursday.

Clubs were beginning to learn details about their full fixtures on Monday, the same day that saw the AFL announce its pre9season competition.

All 18 pre-season games will be played at different grounds across six states, with Carlton and Essendon to kick off next year's JLT Community Series at Ikon Park.

The two weeks of pre-season games will start on Thursday, February 28, and will coincide with rounds five and six of the AFLW season.

Traditional rivals Collingwood and Carlton will face off in the final match of the pre-season series, with a Monday afternoon clash in Morwell on Labour Day.

There will be three new venues that will see AFL played their for the first time: Avalon Aiport (the new ground of VFL club Werribee), Port Pirie in South Australia and Lismore in Northern NSW.

"It's the first opportunity for supporters to see the new rules and interpretations in action," AFL fixture boss Travis Auld said.

"It's also the first chance from a pretty busy trade period to see new players debut for their clubs."

Auld said the league was keen to shorten the pre-season series, to be over two weeks instead of three.

"One of the reasons we condensed it into two weeks is it fits better with AFLW season, so there's less disruption to that," he said.