Giannis Antetokounmpo, the Milwaukee Bucks star and a favorite to win the N.B.A.’s Most Valuable Player Award, was walking toward his team’s bench during the fourth quarter of Sunday’s thrilling Eastern Conference finals matchup against the Raptors in Toronto.

And there was the rapper Drake, sitting in his usual courtside seat, wearing what could be charitably described as a purple coat of some sort, and sending a steady stream of unfriendly chatter toward Antetokounmpo as he walked by. Antetokounmpo gamely tried not to show any reaction, but his bottom jaw was jutted out nonetheless.

It’s a safe bet he heard the taunts of the Raptors’ most famous fan.

“Drake is Spike 2.0,” he said as Antetokounmpo headed to the bench, referring to the film director Spike Lee, who famously railed against Knicks opponents when the team played meaningful games in the 20th century.

Miller would know. As a member of the Indiana Pacers, he routinely exchanged trash talk with Lee. During the 1994 Eastern Conference finals, Miller turned to Lee and put his hands around his own neck to signify choking in a game the Knicks lost thanks to a late barrage by Miller.

Twenty-five years later, there was Drake, mocking Antetokounmpo when he fouled out in the second overtime. Drake, his face expressionless, waved repeatedly, as if he were a royal monarch, to the departing Greek star.

The Raptors won, 118-112, much to the delight of Drake, and on Tuesday night they had a chance to even the series at two games apiece. And Drake had another chance to do what he does fairly well: irritate the typically unflappable Bucks.

I know he annoys many N.B.A. watchers. He has for a while, ever since he was named the Raptors’ global ambassador in 2013. Complex named Drake the “most annoying celebrity fan” last year. But, man, I do enjoy watching him troll N.B.A. players. I wish every team had a Drake. His efforts in this round may be for naught: The Bucks are very, very good.

But I genuinely guffawed last round when Drake started swaying with his arms extended like airplane wings during a blowout win in Game 5 against the Philadelphia 76ers. Joel Embiid, a professional troll himself, felt compelled to tell Drake to his face that the 76ers would return to Toronto for a Game 7. Embiid was right! Did the Sixers come out swinging a littler harder in Game 6 in part because of Drake? I want to think so. Did Embiid look in the mirror and say, “I can’t let Drake get the last word on me”? Maybe. 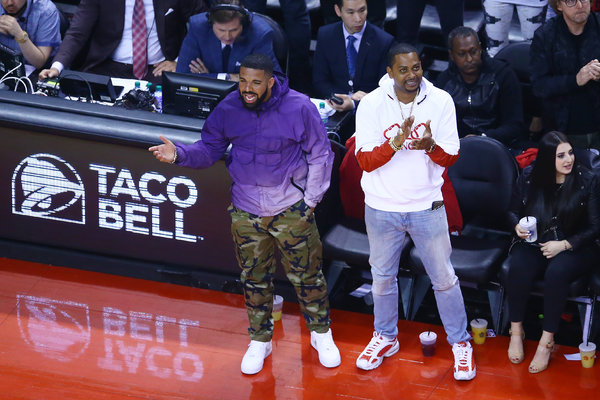 This is how weird the Drake-at-N.B.A.-games phenomenon has become: Last year, the league spoke to the Raptors about getting him to tone down his antics. He almost got into a fight with Kendrick Perkins, then a reserve center on the Cleveland Cavaliers. Yes, the N.B.A. has a terrible recent history of fans and players fighting — but what a time to be alive when Drake can get that kind of reaction.

Drake, in many ways, represents the new N.B.A. He’s a different kind of superfan than the others — than what Lee is to the Knicks, or what Billy Crystal and Jack Nicholson are to the Los Angeles franchises. And that’s not even including all the various Wahlbergs for Boston.

Drake is the dream personification of what the league is now — youngish (32), international and credible among players. (His friendships include LeBron James, Stephen Curry and many others. Terrence Ross used him as a dunk contest prop in 2014.)

But more than that, he’s a troll watching a troll’s league. Players are constantly going at each other on social media. Curry laughed in a referee’s face near the end of a regular-season game in which the Warriors were unhappy with calls. Damian Lillard waved off Russell Westbrook and the Oklahoma City Thunder in the first round of this year’s playoffs.

There are posturing dunks and crippling, nearly ankle-breaking reverse dribbles. The N.B.A., in 2019, is about ownage — about how much territory and airspace you can claim. Having Drake be the face of the Raptors, and by extension, the league, is ideal and even unique to the N.B.A.

This kind of fandom from Drake is really only possible in professional basketball, where fans are close to the action and players don’t wear masks, pads and helmets. The athletes are worldwide celebrities themselves. Drake’s mission to irritate everyone around him, especially players, is a testament to how accessible basketball wants to appear — even if you need a couple thousand dollars to buy the tickets that Drake has.

When he is courtside, Drake, in his own strange way, morphs into an Everyman, shamelessly mocking Antetokounmpo when he fouls out of a critical game.

To the Raptors’ credit, they’ve embraced Drake wholeheartedly. Their practice facility, the OVO Athletic Centre, is named for one of his brands. Sometimes Drake conducts postgame interviews.

I hope Drake gets a 10-day contract at some point, just to ratchet up the circus. Because this is the stuff that keeps N.B.A. fans watching and opens the door to new ones.

It’s possible the dunks, dribbling and 3s help, too.