The NRL's multi-million dollar feud with disgruntled bookmakers over how much revenue the game should generate from wagering has ended just days before the opening State of Origin clash, one of Australia's biggest sporting gambling events of the year.

The bitter, months-long struggle over what fees the country's wagering giants should pay the NRL has been resolved on the eve of NSW and Queensland locking horns at the MCG, a match tipped to generate enormous betting interest. 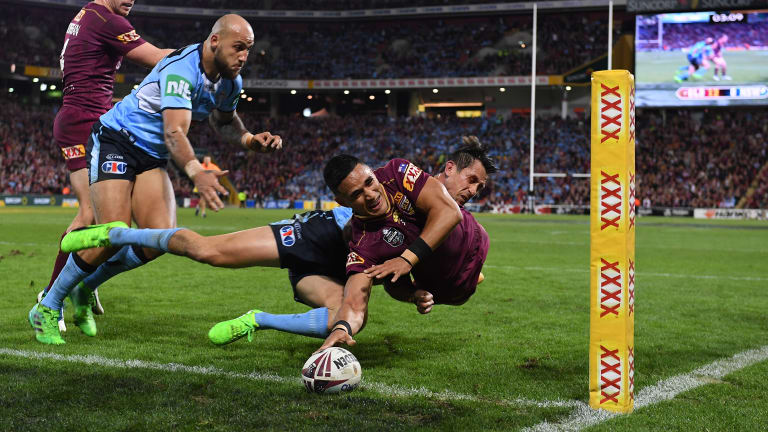 Betting bonanza: Origin is the biggest league betting event on the calendar.

It's understood the last of the aggrieved oddsmakers reached agreement with the NRL over new integrity agreements late this week, avoiding the embarrassment of having to roll over a temporary accord for a fourth month.

It's believed League Central wound back their original product fee proposal which allows bookmakers to bet on NRL matches, amidst forecasts it could have pocketed an extra $10 million annually for the code if the initial deal was pushed through.

It was enough to appease the country's bookmakers who are licensed to bet on NRL, with all agreeing to the accord.

The new fee structure will be backdated until the start of the season despite being met with some resistance from those that have signed up to it.

But Fairfax Media understands the new agreements are for just one year, meaning the parties will again be back at the negotiating table in a matter of months before the December 31 expiry date.

The previous deals were signed for three years.

It's an indication both the NRL and the individual bookmakers still have much to sort out when it comes to how much the sport should charge for gambling on its matches.

It has been a grey area for the Australian Rugby League Commission and NRL executives given its increasing pitch to women and kids to arrest struggling participation levels.

Racing NSW chief executive Peter V'landys, who has just joined the ARLC as an independent director, is expected to guide the NRL's position on product fees later this year having taken his seat at the game's top table.

V'landys has previously marched bookmakers up the steps of the High Court – and won – the landmark race fields fees case to consolidate wagering revenue for the thoroughbred industry.

The NRL's product fee position has been the source of much angst this year despite its representatives and bookmakers starting talks over a fresh integrity accord last December.

The NRL hired former New Zealand Thoroughbred Racing boss Greg Purcell as a consultant in the initial stages of negotiating, but it's taken until the competition's mid-way point for any sort of common ground to be reached.

Perplexed bookmakers had initially argued the NRL would have been the most heavily taxed domestic sport in the country, threatening to plough its vast marketing spends into promoting other codes such as the AFL and rugby union.

Australia's wagering chiefs had become so frustrated they had privately urged NRL chief executive Todd Greenberg to intervene to help resolve the dispute.

It led to the previous integrity arrangements being rolled over on a monthly basis as the parties seemed locked in a stalemate.

But the fracas won't spill over into Origin, which lends itself to being one of the biggest sporting betting events of the year given its massive TV audience and relentless media coverage in the days leading up to the clash.

The NRL's link to gambling has been a contentious one, given the long-running match-fixing investigation which provided countless bad publicity for the game. No persons were charged at the end of the probe by Strike Force Nuralda.

It has also dealt with the fallout of the Tim Simona scandal where the ex-Tigers centre was found to have placed bets against his own team. Simona's contract was deregistered.

The NRL has insisted its four clubs in the inaugural women's premiership due to kick-off later this year be devoid of gambling sponsorship, which is scattered amongst its franchises. The NRL also has an official wagering partner in corporate bookmaking behemoth Sportsbet.