The NRL won't budge from its contentious policy of scheduling all-NSW blockbusters in which teams can meet twice in the space of just three or four weeks as it ramps up efforts to draft its 2019 draw ahead of previous years.

An intentional plan to have some of the game's biggest NSW rivalries create interest in the early rounds of the competition will reach a climax this weekend when three matches feature re-runs of earlier clashes this year – even though the competition is just eight weeks old. 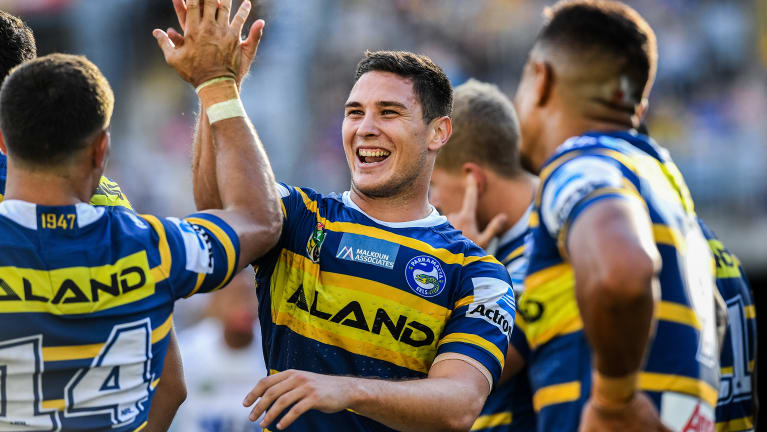 Double down: Mitchell Moses and the Eels.

The Bulldogs will travel west to take on the Panthers, the Sea Eagles will host the Knights and the Tigers tackle the Eels as the NRL tries to position some of NSW's biggest blockbusters in early blocks to trigger fan interest at the start the season.

It's understood League Central has no plans to scrap the idea in the 2019 schedule, which is designed to stop some of the marquee matches featuring traditional foes being diluted during the State of Origin period or when teams are out of finals reckoning late in the season.

Curious fans have wondered why their team has featured against the same opposition in such a short space of time, for example when the Tigers beat premiers Melbourne twice in the space of three weeks in rounds two and five.

But so exasperated were some of the game's powerbrokers with high profile clashes losing lustre during the annual Origin player drain and in end of season games which can carry less consequence, the front-ended draw is likely to be a fixture beyond this season.

No team has felt the significance more than cellar dwellers Parramatta, who will double up against Sydney opponents in eight of their first nine games this year and not travel outside of NSW or the ACT until round 12 against the Broncos.

Brad Arthur's men have already lost twice to the Panthers, featured in a stunning 88-point turnaround against Manly from their previous clash and then play the Tigers and Sharks for a second time in 2018 over the next fortnight.

Opponents of the scheduling have argued the Eels' early season rivals have been able to exploit the blue and golds' struggles twice in quick succession while a team like the Roosters has to wait until the last round to meet Parramatta, who could conceivably find form on the eve of the finals.

Yet there is unlikely to be a change to the pattern under the next broadcast cycle as the NRL seizes more control of its scheduling.

The unusual concept has supporters in clubland, who can leverage the front loading of the draw against some of their fiercest rivals to generate extra commercial opportunities and boost TV ratings.

Bitter rivals St George Illawarra and Cronulla met twice in the first six rounds while the Roosters and Bulldogs won't see each other for the rest of the season – unless they clash in the finals – after the tricolours won both their fixtures this year before the end of round seven.

The Roosters and Rabbitohs typically used to open and close the season with clashes in the first and final rounds, but often the second fixture didn't drum up the same level of interest if one side was out of the finals picture.

Instead, the cramming of all-NSW games in the opening two months of the season will continue to be used alongside other engagement tactics such as double-headers and Magic Weekend, which will feature all eight NRL matches in one round being played at Brisbane's Suncorp Stadium next year.