NRL interchange shift could put Canberra Raiders ahead of the pack

An NRL competition committee meeting could spell the end of the days of big being “beautiful” in rugby league, and the possible departures of two heavyweight props could push Canberra ahead of the pack.

The Raiders are in danger of losing giant front-row duo Junior Paulo and Shannon Boyd at the end of the season, with the club conceding they can't compete with "astronomical" offers from rival clubs. 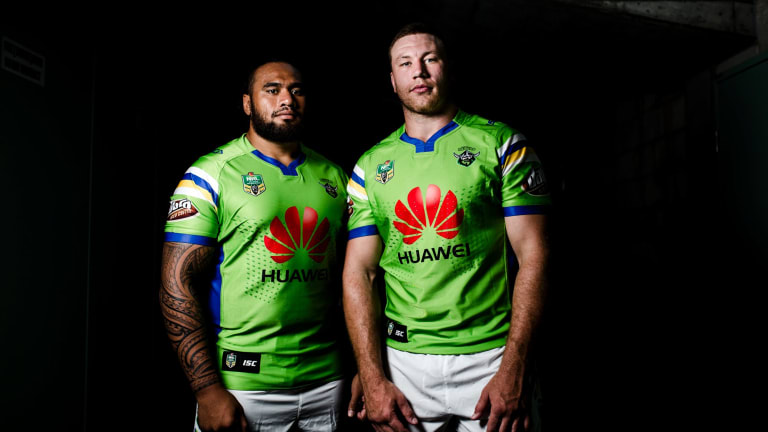 What would a reduced interchange mean for Junior Paulo and Shannon Boyd? Photo: Jamila Toderas

But the NRL competition committee will meet on Friday and the possibility of reducing the number of interchanges from eight to six is on the agenda, which would put 80-minute forwards in demand.

Raiders second-rower Elliott Whitehead admits he would rather it stay at eight but he believes Canberra will be well-equipped to handle the change if it comes.

They will get a chance to prove it with Paulo out injured in a clash with the Cronulla Sharks at Canberra Stadium on Sunday.

Whitehead and Joe Tapine already play big minutes in the back-row, while Josh Papalii has trimmed down and is powering through a heavy workload alongside Sia Soliola in the middle.

"It’s hard enough as it is with eight subs, never mind six. To have 80-minute players is very important, if you go down to six subs then the bigger players will probably have to get a little bit fitter and probably lose a little bit more weight. I reckon they should just leave it at eight to be honest.

"It’s good, it just helps that rotation out in the middle where they get a few extra subs and we’ll be looking to play minutes again and Sticky can just rotate the middles."

NRL officials are looking to combat a growing injury toll and believe serious injuries may be related to the speed of the game with players getting fitter and bigger.

Discussions about revamping the interchange comes with twelve players already set to spend the rest of the season on the sidelines, and with 74 footballers across the league missing in round 10 due to injury.

It could work in Canberra's favour with Junior Paulo on the cusp of a return to the Parramatta Eels on a mammoth four-year deal, while Shannon Boyd has been linked to the Gold Coast Titans. The Green Machine also look to have missed out on Melbourne prop Tim Glasby, who is reportedly nearing a deal with Newcastle.

Sharks star Wade Graham – labelled by Whitehead as "one of the best back-rowers in the competition" – is one of the players out injured this weekend, but Cronulla welcome back damaging veteran Paul Gallen.

It means the Green Machine can't take things lightly with Paulo facing up to 10 weeks on the sideline with a fractured foot.

"We’ll definitely miss Junior, he is going to be a big loss for us, but Shannon Boyd is will probably come in and start, he had a great game last week and he probably deserved that starting spot," Whitehead said.

"Hopefully he can continue in his form and keep going. The boys that come off the bench, Charlie Gubb has been named on the bench, he gets another chance to play alongside us.

"It was unfortunate the first time when he got injured but he did actually go well until he got his injury. Hopefully he can find that form again.

"I feel like if we get that then we will get into the game a lot quicker. We can’t probably afford to start chasing the game again, we need to be more dominant and get line speed."