The NRL will dig deeper into comments made by Wayne Bennett suggesting an inherent bias against the Broncos as the father of under-fire Rooster Dylan Napa returned fire, labelling the super coach a "hypocrite" for his outburst.

A furious Bennett unleashed both barrels after Napa avoided punishment for his clumsy tackle on Broncos forward Korbin Sims, who was left with a broken jaw in the wake of a heavy collision with the marauding prop. 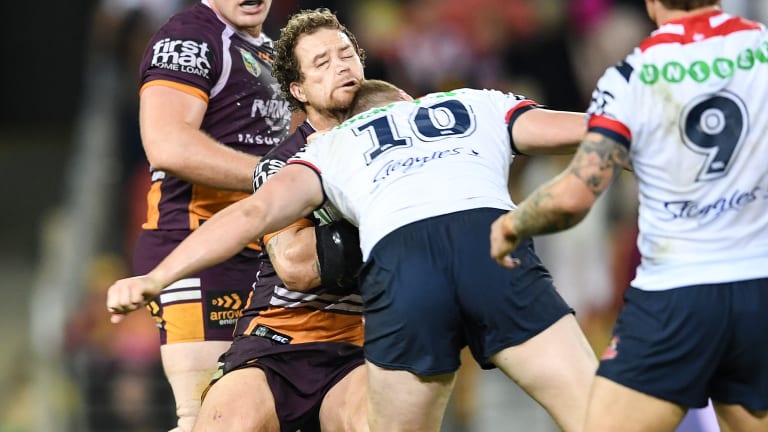 Head to head: Dylan Napa escaped a ban for his head-first tackle on Korbin Sims.

Napa was sent to the sin-bin but not charged by the match review panel after a review. Even NRL boss Todd Greenberg thought there should have been further action, revealing late on Monday that he believed the incident warranted a charge.

That backing was too late for a fuming Bennett, who thundered to News Corp that the game had deserted its duty of care to players.

"Why hasn't the game made Napa accountable?" Bennett said. "I know there will be a s***fight coming my way but I'm not backing away from it.

"I am not going to watch my players get broken jaws and remain silent. When you go before the judiciary, they will ask the player, 'What was your duty of care?' Where is Napa's duty of care?"

But it was his claim of bias that could land him in hot water. Bulldogs coach Dean Pay was hit with a $25,000 fine after saying "it's like we're not supposed to win" when Canterbury were beaten by the Broncos in round nine.

"There is a bias against the Broncos," Bennett said. "We won a game we weren't supposed to win so that would have pissed off the Roosters even more."

Greenberg said he was yet to see Bennett's comments but would do so in coming days. He said he felt the on-field referees handled the situation well but his opinion differed with that of the review panel.

“My first thought was that the referees on the field did a good job. I thought it was a good sin bin. Ultimately then it goes to an independent process which is our match review committee," Greenberg said.

"My personal view is player safety always comes first and if you’re going to err on the side of caution, I thought it warranted a charge."

Whether Greenberg has sympathy for Bennett's position is unlikely to help the Broncos coach should his comments be deemed to have crossed the line.

The fact the quotes were made to a newspaper reporter instead of at a recorded press conference will mean the investigations take longer. Bennett was due to speak again on Wednesday ahead of Brisbane's home game against Parramatta.

Napa has yet to respond publicly but his father Stan, a fearsome hit-merchant that rattled bones for Brisbane Norths in the early 1980s, played down the severity of the tackle and said Bennett wouldn't have been so concerned if it was one of his players under scrutiny.

"Bennett – he's always going to whinge. He's just a hypocrite.  But he has to protect his players. I can understand that," Stan Napa said.

"He says he doesn't like the media but he seems to like to ring them with stories.

"I just thought (the tackle) was nothing. It's unfortunate that it happened, of course, but sometimes that's the case in contact sports like rugby league.

"Dylan has done about 4000 tackles in the NRL and now everyone is questioning his tackling style."

Broncos veteran Sam Thaiday, a former Maroons teammate of Napa, joined the fray from Brisbane on Monday, saying he took exception to the way the Roosters celebrated the shot while Sims lay on the ground in a world of pain.

"We've got a player laying on the ground that's injured," Thaiday said. "I understand we play a contact sport…big tackles occur in our game.

"I took offence when they were celebrating the tackle and we've got a player laying on the ground injured."

Roosters players rallied around Napa on Monday, with Joseph Manu saying the contact was accidental and didn't even warrant a penalty.

"That should not have been a penalty. No player really goes out there to go head first into a tackle. I haven't seen anyone that goes out and tackles with the head first," Manu said.

"You could see that he did a right-foot step. It was just an accident really. He stepped and they just head clashed … it didn't look like a penalty to me."

– with James Buckley and AAP