The NRL came over the top of the Raiders' proposed ban earlier in the year when Wighton pled guilty to five counts of assault and one of public urination, imposing a 10-game ban and a $30,000 fine. 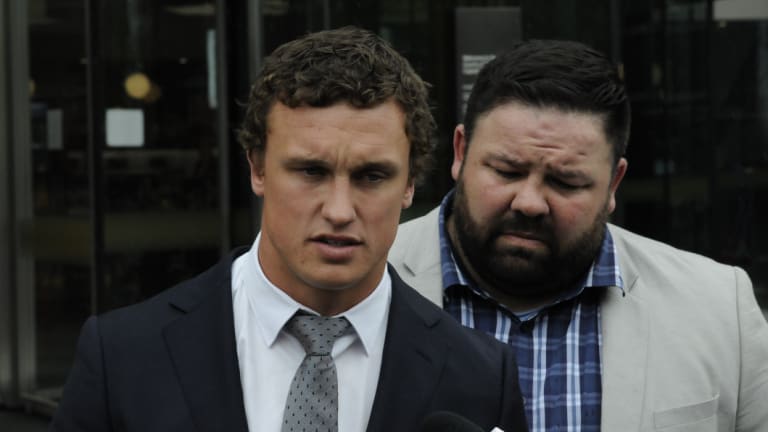 He appeared in the Galambany Circle Sentencing Court on Wednesday, where he was fined $3500, received a two-month suspended jail sentence and was placed on a one-year good-behaviour bond.

It means if he breaks the conditions of his good behaviour bond he risks going to jail.

Greenberg saw the vision "four or five months ago" and decided the Raiders' proposed six-game ban was insufficient.

He said there would be no further sanctions on Wednesday, given the NRL integrity unit had all the details back in July when they handed down their punishment.

"It was disgraceful [the vision], there's no other word for it," Greenberg said.

"I saw that vision four or five months ago, which is why I made the decision that I did at the time.

"It's very rare that we come in over the top of the club on a disciplinary matter, but we did on this occasion and I'm satisfied we made the right decision then.

"No further sanctions. If you look at the sanction, he received a fine from the game which was effectively 10 times what he got in the court of law and he didn't play again in the entire 2018 season so I think his punishment is served."

Former Manly cult hero George Rose, who is Wighton's cousin-in-law and an NRL player engagement manager, spoke on Wighton's behalf at the hearing.

He's seen first-hand the good Wighton does not only for the community, but his own family as well.

Wighton become emotional when Rose came forward to speak about him, stating he would provide support for the fullback going forward.

"I've got a lot of respect for Jack and the person he is … he sells himself short," Mr Rose said.

"I know what he's done for indigenous players that come down here [to Canberra]. They feel at home, feel like they're around family.

"Whatever happens today I'd like to support him going forward, like how he's been for my partner in the past."