How seriously is the NRL taking the allegations of sexual assault against Jarryd Hayne?

Well, the bosses of the game decided to refer the matter straight to police as soon as they were briefed on the interview the woman gave to the NRL Integrity Unit on Monday, November 5. The NRL has been monitoring the welfare of the woman since then. 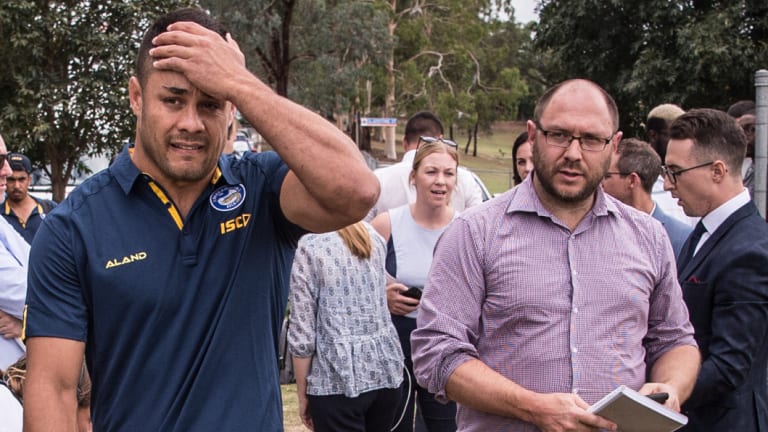 First claim: Jarryd Hayne departs after answering questions, back in January, about an alleged rape during his time in the United States. Credit:Wolter Peeters

Parramatta have also had welfare officers checking on the wellbeing of Hayne – but privately the Eels are saying they are glad he is off their books.

Hayne had completed his exit interview with the Eels before the night when the sexual assault is alleged to have been committed. However, he was still a contracted player on September 30, the night in question.

The club had been in regular touch with Hayne in the off-season but say that about five days before the allegations became public communication with the former Eel shut down. But it is likely that was a coincidence as his manager and lawyer had no idea at that time of the accusations being levelled against Hayne.

Detectives from the Sex Crimes Squad had been investigating the allegations for about a week before the story became public.

The woman talked with Integrity Unit investigator Karyn Murphy in her home in the Hunter region in early November. NRL sources say that the interview went for a considerable time.

There have been questions as to why it took the woman more than a month for her to take a step towards telling authorities. From what I can gather, it was to do with the way she felt after the evening and a fear of being identified.

Members of the woman’s family urged her to come forward as soon as they learnt of her alleged evening with Hayne.

Without their support she may have never agreed to be interviewed. It’s understood the family was furious when they heard her side of the story.

I have talked to her family – specifically her sister and brother-in-law – and they didn’t want to let the matter sit. But they said concern about her mental and physical health was their priority.

The fact that she visited a doctor and took photographs in the aftermath may add weight to her case. I have not seen the doctor’s report nor the photographs.

The police are understood to have completed a number of key interviews and are keen to keep the identity of those they have interviewed very quiet.

Even bank sees Hayne as a ‘risky’ investment

The banking royal commission and rugby league would seem like very separate entities – but the allegation levelled against Jarryd Hayne has brought them together.

The Dragons had been in serious discussions with Hayne, but the fresh allegations have made them reconsider their stance in the short term and maybe in the long term.

They are of the view that everyone deserves a presumption of innocence. However, with St George Bank as their major sponsor the Dragons are aware of being squeaky clean with the banking royal commission going on.

With a civil suit for an alleged rape going on in the United States and a police investigation happening here, Hayne is seen as a risky commodity – even though he has not been charged with anything.

Hayne has been operating without a manager but the talks with the Dragons have centred on a $1.4 million, two-season deal.

The Dragons were still some distance from accepting his terms but certainly had an appetite for his signature.

The thought of kicking young fullback Matt Dufty to the kerb has not been raised, according to the Dragons. They see him as their future and have gone out of their way to tell him as much. His family has been put out by talks that he won’t be at the club – even though he has a deal for next year. He’s a local and the club wants to keep developing his talent. And they concede he is a work in progress.

Now or never for Brown

Nathan Brown is one of the game’s most-loved coaches but there is increasing talk he is under pressure to perform or perish.

The club has fired a shot across his bows with Knights head of football Darren Mooney no longer at the club. Brown has been through the lean years and got the club and team into a position where they now are a threat. 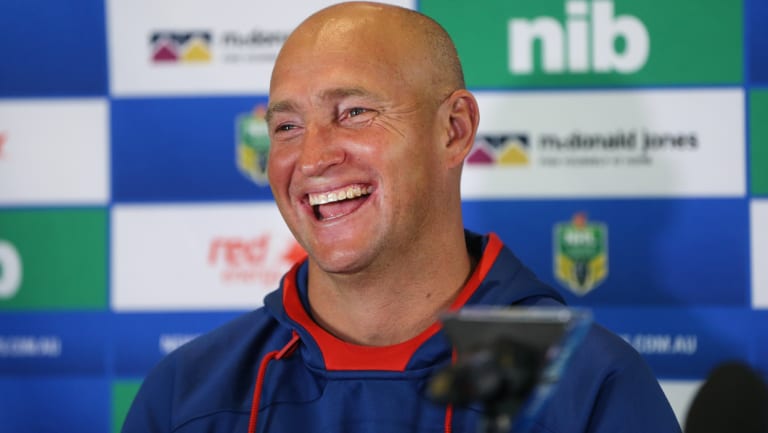 Year-by-year deal: The time for excuses is over for Knights coach Nathan Brown.Credit:Marina Neil

The addition of David Klemmer would give Brown a top-eight-worthy squad in the eyes of those who matter at the Knights. Brown is on a year-by-year deal.

The expectation is that the Wayne Bennett–Anthony Seibold switch will happen this week – but there is more pain to go through for both parties before it takes place.

Bennett is due back from a European holiday and that’s where the action will happen now. Bennett will get some kind of payout from the Broncos. He won’t get his full $900,000, but he will get a payout.

His main concern has been his staff and their futures. Bennett has not been pushing for his staff to join the Rabbitohs as they are set for coaches and staff – unless Seibold tries to drag a few of them up to Brisbane.

Bennett met with Souths boss Shane Richardson in England. They talked for hours just to give Bennett a rundown on the Souths philosophy and the way they do things. Bennett has been around for too long to think that he has to reinvent the wheel. He will coach to the best of his ability while finding his way next year.

Souths are quietly fuming about suggestions that Alex Johnston and Greg Inglis have had a massive falling-out. It has been suggested that is why Johnston wants to leave the club.

The Rabbitohs say that is wrong on two counts. They don’t want Johnston (right) to go. They say that instead of hating Inglis, Johnston considers Inglis a hero and has always idolised him.

The only sticking point with Johnston is that he wants to play fullback.

Stewart back in Sydney

After a stint in Melbourne as an owner and manager of a restaurant, one of the Sea Eagles’ greatest players, Brett Stewart, is back in town. Stewart still has his Melbourne business but is now working in Sydney for a company that Bob Fulton owns. With Des Hasler back at the Eagles, it will be interesting to see if Stewart re-involves himself with his club.

With David Klemmer almost certainly on his way out of the Bulldogs, it’s worth noting that in the first week of training the club lost both their head physio and head doctor. Dogs powerbroker Chris Anderson brought in his mate Tony Ayoub to lead the high-performance unit. Ayoub has been a physio at Newcastle, Melbourne, the Roosters and Canterbury.

From what I have been told, when he last left Canterbury it was a messy exit. Chief medical officer Bassam Moses has gone to GWS, while head physiotherapist James Rahme has joined Des Hasler at Manly. Players are not happy to lose these two medicos. The Bulldogs have ranked highly in keeping players on the field and healthy over the past five years.

Roosters to take USA via Storm

In the moments after the Roosters beat the Storm to win the NRL premiership, the players all started a ‘‘Vegas, Vegas’’ chant when the club supremo Nick Politis entered the circle of celebration. The players have got their way – the entire team minus a few of the players who are not old enough to drink in the United States and those leaving the club – are in America on an end-of-season trip.

First stop Los Angeles. They are also going to take in Dallas and then spend time in Las Vegas. Rival clubs are asking about the timing of it with plenty of teams already hard at it in pre-season. You can be sure that with Trent Robinson in charge the Roosters are not cutting any corners.

Danny Weidler is a reporter with Channel Nine news