NSW Swifts enter the 2022 Super Netball season with a target on the back but it’s a label they’re comfortable with before their round-one grand final rematch against their cross-town rivals.

Any talk of pressure mounting on the Swifts isn’t filtering into the squad despite entering the season as the team to beat and one strongly tipped to retain their crown, according to their coach Briony Akle.

Their first test could hardly be more difficult, facing last year’s grand final opponents GWS on Saturday night at Ken Rosewall Arena. However, Akle says the players aren’t feeling the burden of expectation before their round one clash, and the Swifts are itching to pick up from where they finished last year in their bid for successive titles. 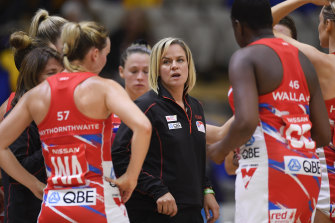 “For us in any sport going back-to-back is really hard and it’s talked about more in the media more than in the change rooms,” Akle said. “The pressure for us is that it’s just a new season and it’s game one tomorrow night. The trophy is back on the table and up for grabs.”

The Swifts start the season having had a disrupted pre-season due to international netball clashing with their preparations. The shorter pre-season could require more time on the court for the team to find their combinations but Akle believes they are still cohesive enough to get a result against their rivals.

“I think we have had a different pre-season with internationals being on, so we haven’t had our full team for not that long,” she said. “I think for us we have recruited really well in the off season, got some new players which is great, brought some new energy. I think they are ready, they have come together in the last month now that we have our contracted team together.”

During the off-season, the Swifts snared Teigan O’Shannassy from GWS and she will make her debut against her former team on Saturday night. After enduring the difficulties of two COVID-19 affected seasons, NSW are planning to rely on more players for depth in 2022 including youngsters such as O’Shannassy.

“Change is always good and we are looking forward to them taking the court,” Akle said. “I think for us it’s about a team of 10 and not just a team of seven. Getting court time in every game is invaluable turning up to finals.”