NBA champions the Golden State Warriors have suffered their first defeat of the season, a 100-98 loss at the unbeaten Denver Nuggets.

Gary Harris scored 28 points while Nikola Jokic had 23 points and 11 rebounds for Denver.

But it was a Juancho Hernangomez block on a last-play Damian Jones lay-up that iced the game for the 3-0 hosts. 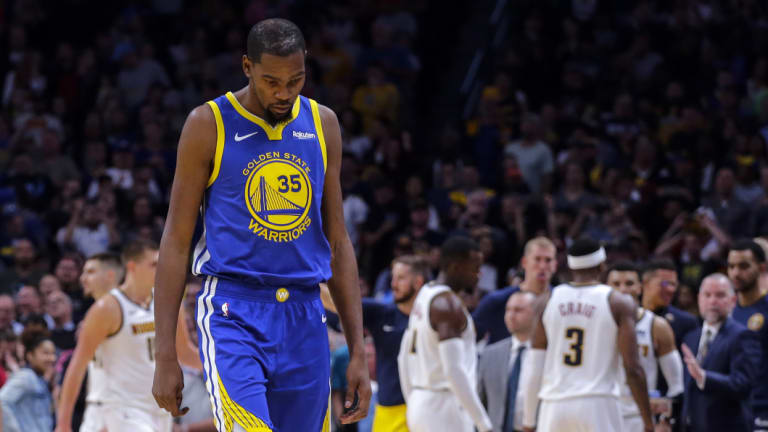 The Warriors suffered their first loss of the season.Credit:AP

Denver found a way to win despite a poor shooting night – including hitting just six of 32 three-pointers and missing 18 free throws.

Houston Rockets could not overcome the unavailability of suspended guard Chris Paul, serving his first game of a two-game ban for an on-court fight against the Lakers, in a 115-112 defeat to the Los Angeles Clippers.

Tobias Harris led the Clippers with 23 points while reigning NBA MVP James Harden had 31 points and 14 assists for the Rockets, who are now 1-2 after three games.

Russell Westbrook's season debut for Oklahoma City Thunder was spoiled by a 131-120 away win for the Sacramento Kings.

Iman Shumpert scored 26 points to lead the Kings to their first win of the new campaign on Sunday's while De'Aaron Fox scored 22 points and Buddy Hield added 17.

Westbrook missed the pre-season and the first two regular-season games after having a procedure to deal with inflammation in his right knee.

He had 32 points, 12 rebounds and eight assists in 35 minutes after averaging a triple-double the past two seasons,

Paul George scored 29 points and Steven Adams added 10 points and 14 rebounds for the Thunder, who are now 0-3.

Trae Young had 35 points and 11 assists – the best line for an NBA rookie in eight years – as the Atlanta Hawks rolled to a 133-111 win over the winless Cleveland Cavaliers, who lost their home opener.

Young, the No.5 overall pick in this year's draft, became the first rookie to reach at least 35 points and 10 assists since Warriors star Curry in 2010.

Kevin Love scored 16 and added 17 rebounds for the Cavs, who are adjusting to life after LeBron James.