Kyler Murray, the star quarterback for the Oklahoma Sooners, posted to Twitter a portrait of himself wearing football pads while balancing a bat on his shoulders a few weeks ago. It was a homage to a famous Bo Jackson Nike ad, a relic from a time when Jackson starred for both the Kansas City Royals and the Los Angeles Raiders.

But if Murray is to be believed, his days of two-sport stardom will soon end.

Murray, 21, arguably has been college football’s best quarterback this season. He has led No. 5 Oklahoma (11-1) to the precipice of a Big 12 championship. The Sooners play No. 9 Texas (9-3) for the title on Saturday. A win could bring a berth in the College Football Playoff. The following weekend, Murray could well pick up the Heisman Trophy. If he wanted to, he could quarterback the Sooners again in 2019.

He has said he will not. His future, rather, is with baseball’s Oakland Athletics, who selected him with the ninth overall pick in last spring’s Major League Baseball draft. The A’s intend to turn him into the franchise’s next iteration of the speedy Hall of Fame center fielder Rickey Henderson.

“I feel like I could play in the N.F.L.,” Murray said at a media availability this week, “but as far as giving it up, as of now, yeah, that’s the plan.”

While the current N.F.L. quarterbacks Jameis Winston and Russell Wilson also dabbled in baseball (as has the former N.F.L. quarterback Tim Tebow), one has to go back a quarter-century or more, to Deion Sanders and Jackson, to find players who excelled in both sports as Murray does.

Murray is exceptional, of course, but he is also part of a sudden shift among top athletes. At a time of intense specialization in youth athletics, studies have argued the benefit of multisport youth careers. In last year’s N.F.L. draft, 29 of the 32 first-round picks had played a sport besides football in high school, the Aspen Institute’s Jon Solomon said, pointing to figures from the website Tracking Football.

“In an era that is hyper-focused on, ‘O.K., you’re 12 years old, time to decide what sport to commit your life to,’ this is incredible,” said Yogi Roth, a Pac-12 Networks analyst and prominent quarterback coach.

Even more notable than Murray’s starring in baseball and football is his apparent decision to commit his future to baseball. Anyone who watched his heroics in last Saturday’s 59-56 win at No. 15 West Virginia (8-3) might be tempted to second-guess this choice. Murray threw for 364 yards and three touchdowns and reeled off a 55-yard dash for a fourth. 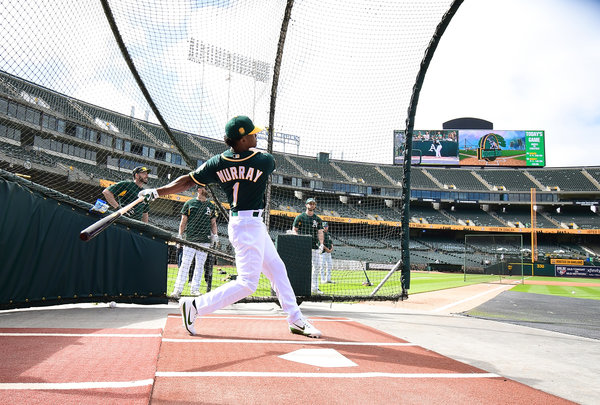 Murray may be playing a cagey negotiation game. A generation ago, John Elway threatened to pursue a career as an outfielder for the Yankees to get the right deal with the right N.F.L. team, forging a Hall of Fame career with the Denver Broncos. But if that is the case with Murray, neither he nor his agent is letting on.

“The problem is, in football, you see the consequence of his great athletic skill applied to a sport,” Scott Boras, the baseball superagent who represents Murray, said in an interview this week. “For those of us who know baseball, the real sport where he’ll be a star lies ahead.”

Most athletes with Murray’s incredible athleticism are guided away from baseball at a younger age, Boras said. Baseball stardom is notoriously difficult to project. However, Boras said, for a person to combine Murray’s running and leaping ability with his bat speed is “extraordinarily rare.”

Murray would have plenty of gridiron options. This season, his first as a starter, he has thrown for 37 touchdowns and rushed for 11 more. He and Tua Tagovailoa, Alabama’s sophomore quarterback, look like they will be the closest Heisman contenders in years.

“He would be a first-round pick if he committed and promised he was going to play football,” the ESPN analyst Todd McShay said. Though Murray is short, listed at 5 feet 10 inches, the league’s attitude toward the prototypical quarterback is rapidly changing, McShay added. Murray, he said, with his speed and powerful arm, resembles successful quarterbacks like Wilson and Michael Vick.

Yet despite Murray’s pledge to go all-in on baseball now, it was clear that it was important to him to have this football season. At an introductory news conference with the A’s last June, Murray was asked whether he would have signed a contract with the team had it not let him return to play football. When the quiet Murray struggled to answer, Billy Beane, the team’s executive vice president, joked, “I’ll make it easy: It was a deal-breaker for us if he didn’t go back and play at the University of Oklahoma.”

The contract he signed with the A’s, for more than $4 million, may well have made Murray the highest-paid college athlete ever, even if — in an exception expressly permitted by N.C.A.A. bylaws — he was not paid for the sport in which he competed.

Coming out of high school, Kyler Murray was ranked among the best quarterbacks in his class. He matriculated in 2015 at his father’s alma mater but transferred to Oklahoma after his freshman season when he failed to win the starting job. He sat out 2016, per N.C.A.A. transfer rules, and in 2017 played baseball and football, where he saw limited time backing up Baker Mayfield, the Heisman winner who now starts for the Cleveland Browns.

In the spring, Murray split his time between football practices and the baseball season. One Friday in April, said the baseball coach, Skip Johnson, Murray rode the bus down from Norman to Fort Worth, Tex., for a series against Texas Christian. He slugged two home runs from the cleanup spot in the No. 19 Sooners’ 8-5 win. He then flew up to Norman to make football practice a week ahead of the spring game. He was back on a plane in time for that Sunday’s doubleheader against T.C.U. He singled in the first game to extend a hit streak to seven games and drew a walk in the second.

In other instances, Johnson said, Murray would arrive at a home baseball game from football practice around 5:45 p.m. and take batting practice and shag fly balls before the 6:30 p.m. opening pitch.

“We kind of told him, ‘Hey, it’s not going to be easy, but you’re the one who signed up for this,’” Lincoln Riley, Oklahoma’s football coach, said this week.

“And give the kid credit,” Riley added, “he did, and did it at a high level.”

Leigh Steinberg, who has represented several star N.F.L. quarterbacks, noted that in football, high draft picks get relatively big pay up front — the ninth pick in this year’s N.F.L. draft received more than $18 million over four years — and the chance at a huge second contract after four or five seasons. Baseball prospects, by contrast, face the minor leagues and then as many as six years of team control — with relatively small salaries — before potentially making real money on the open market.

Star quarterbacks like Drew Brees and Tom Brady are playing at a high level in their late 30s or early 40s.

“If a quarterback is a quality starter, the salaries have now reached baseball levels,” Steinberg said, estimating that current stars on rookie deals (including a client of his, Patrick Mahomes of the Kansas City Chiefs) will command contracts worth $30 million annually in a few seasons.

Then again, “baseball levels” remain the standard, with top players — several of them Boras’s clients — already making more than $30 million per year in guaranteed money. And McShay, though wistful about Murray’s not going to the N.F.L., cited “longevity” in explaining why he understands the decision.

Murray did not speak in dollar terms at the A’s news conference. Rather, he said he had been persuaded by the realization that he was “decent” at baseball after all.

“Getting to live out this dream,” Murray said, “is pretty special.”