There might be a real city tinge at Goulburn today, with Godolphin and a few other leading metro yards bringing their rising youngsters down the freeway, but it’s a Canberra veteran having his 66th start that looms as the best value. 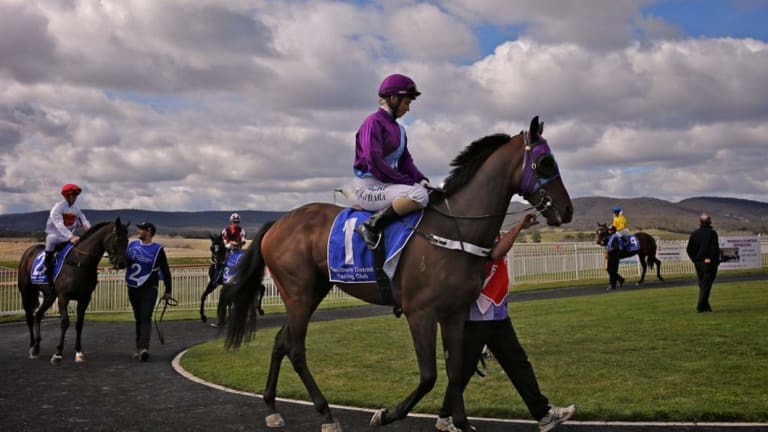 The Fred Cooper Cup is the big one at Goulburn on Thursday.Credit:Brendan Esposito

Tireless eight-year-old Le Cavalier, from the Norm Gardner yard and with an understated near-50 per cent placing strike rate, looks good at big odds in the featured Fred Cooper Cup for two key reasons.

Firstly, a natural backmarker, he’s much better drawn outside horses. Unlike last start in a stronger BM78 at Wagga (1400 metres), where he drew the fence but still found the line nicely from a mile back, today he draws much wider, and that might be the place to be, with the track likely to be chopped up late. Secondly, the claim for apprentice rider Courtney Gravener is pivotal, meaning Le Cavalier will jump just 2.5 kilograms over the 54kg limit, and when you’re giving them a start, that plays its part.

Warwick Farm gelding Triple Hero might be the hardest to run past. He just failed to lead all the way over 1800m at Gundagai before being swamped in a stronger race at Canterbury over further, so back in trip and getting in light after Robbie Dolan’s claim all adds up to him being super-competitive on speed.

Earlier on the card, some smart youngsters can give punters a flying start.

Yalanji will prove hard to beat in race two over 1200m. From a middle gate, he should be able to stalk the speed and pounce late.

In the next, smart three-year-old Pindus resumes for the James Cummings stable after a quiet time in a recent 900m Rosehill trial, sitting midfield under a hold before being allowed to work home under his own steam. He looks bigger and stronger this time in and the trip looks right.