Sport? I am in it for the story.

Show me the most inspirational, moving, memorable moments in sport – the ones to warm our souls as the days grow cold and we grow old – and I will show you either the fantastic climax of a great story, or at the very least the key plank of a story that you know, you just know, is going to be a cracker!

Shane Warne’s ball of the century? And so the story begins . . !

Still hunting: Do fans once turned off by his dominance and attitude now want Tiger Woods to win?

David Campese throws that pass to Tim Horan in the 1991 World Cup semis, to put the All Blacks to the sword? It will be the most turned-to-page in his story forevermore.

Bad boy Andre Agassi continues to waste his talent, only to steady, work hard, win, become a great bloke, and wins the love of Steffi Graf to boot? I want to know more.

Cathy Freeman’s gold medal in the 400 metres at the Sydney Olympics? And so the story ends! Wow, just WOW.

Not for nothing do they call sport, “Shakespeare on steroids”. And that is why, incidentally, as a sports writer, I care little for bare stats, margins, winning percentages and all the rest. Booooooring!

Give me the romance, the background, the characters, every time, so that the story can live and breathe, so the plot-lines have some meaning. Without that knowledge sport is just like most horse-racing – nameless nags running round for reasons best known to themselves, but you can call me “Harvey Norman", for I have “NO INTEREST”.

Which brings us to Tiger Woods.

His started out as an extraordinary story. From out of nowhere, the progeny of a Green Beret Vietnam Vet and a Thai American mother, takes the sport by the scruff of the neck and not only wins, but smashes legends of the game in a manner we’ve never seen before. Again and again and again. Great story. Compelling to watch. Can’t get enough of it.

Then the rot sets in.

Ten years in, the more we watch, the more we notice he’s a humourless automaton, throws his clubs around like a prat, is rude to the public and journalists doing their job, and doesn’t even pay the great Jack Nicklaus enough respect to ever sit down and have a conversation with him that lasts more than a minute. He has an air about him of born-to-rule, which makes you want the other blokes to take him down a peg or two.

Our own Peter Thomson, five-time winner of the British Open put it into words of authority: “I wish he'd smile more. He injures his image by being morose and petulant. There is also very little consideration for the fellow he is playing with. He could show more humility.”

So what do I care if he goes from winning 11 majors, to 12 majors, to 13 majors, to 14 majors? I don’t like seeing machines win and all he is generating is impressive numbers. For you see, “if all the world’s a stage, and all the men and women merely players”, as Willie Waggle-Dagger said, Tiger is not the player I want to see win.

He is the villain in the piece, the one I want to see lose, at the hands of someone more worthy, someone who could only dream of winning just a single major, who would treasure that win forever, whose own story line trumped Tiger’s. Someone like Sergio Garcia! (And when Garcia finally did so, it was great indeed.) 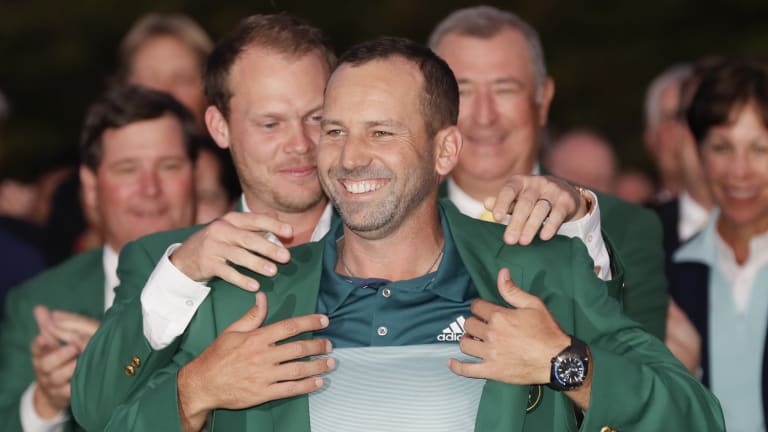 Demons conquered: Sergio Garcia’s extended struggles made his Augusta triumph all the sweeter.

And then, of course, the twist in the road we never saw coming. While marketing himself as the happy and devoted family guy, it turned out Tiger was an adulterer on an industrial scale, flying women in on private jets from all over the world, and placing them on SHIFTS.

And he did. For five years. Never won a sausage. Oh, how the mighty have fallen.

But last Sunday, a strange thing.

For here he is again. Older. Sadder. More humble. And from a standing start of four holes off the pace, on the final day, here he is leading the British Open, with just eight holes to play!

What a story it would be. Tiger Woods, older, wiser, makes his way back from hell, to win his first major in 10 years, watched by his now grown kids – Sam, 11, and young Charlie, 9.

Sadly, it was not to be, as he double-bogeyed the 11th, washed down by a bogey on the 12th. Bugger. I wanted him to win.

A cold day in hell? Yes, but also the power of the story.

So, back to hoping the Wests Tigers can win every game from here on in, claw their way into the NRL Finals by the hairs of their chinny-chin-chins, and – led by Benji Marshall and Russell Packer, guided by Ivan Cleary – go on to win the Grand Final.