LIVERPOOL, England — If anything, the regularity of it all came as a surprise, a jolt back to reality. Liverpool had been serene, again, in victory against Arsenal. Another game notched off without defeat at Anfield. Another shot of Jürgen Klopp pumping his fists in celebration. Order, or something close to it, had been restored. The wildness had receded.

There was just a little anticlimax in there, too. Liverpool and Arsenal had combined for four goals, but in context, that did not feel like very many goals at all. Not just because this is the matchup that has produced more goals than any other in the Premier League era, a fixture given to lavish, cartoonish excess, but because over the last couple of weeks, English soccer has developed a taste for something a little more exotic, a little more reckless, a little more unconstrained.

The Premier League’s self-definition as the best soccer league in the world is not a lie, not exactly, but nor is it really a truth. The claim is too broad, too vague, too imprecise to be meaningful. It depends on the metric you are using. It varies according to taste. It changes over time, as the fortunes of individuals and teams ebb and flow. 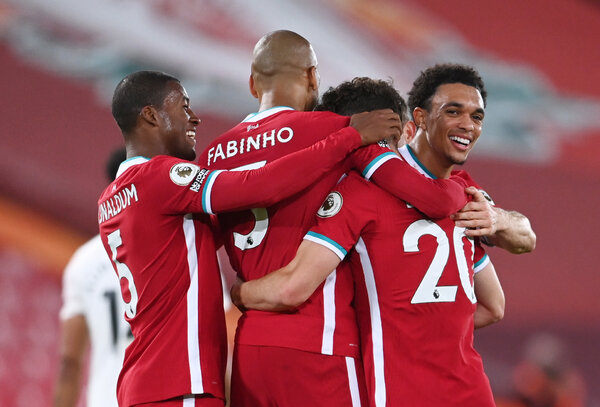 The reason the marketing slogan goes all but unchallenged is because it feels like it is true. The Premier League feels like — looks like, sounds like — the best league in the world. The quality of the product is competitive, of course, but it is the packaging that really separates it from the rest.

Consider the microphones. In many of its rival leagues, at least until recently, the microphones on the sidelines are placed so as to maximize the sound picked up from the field itself: the sweep of a boot, the crack of a ball, the ripple of a net. In England, the focus is on the noise that flows from the stands: the songs, the roars, the groans. Soccer’s true soundscape is not people playing soccer; it is people watching soccer.

A number of players and coaches, particularly those arriving from Germany, have been struck upon arriving in England by the fact the stadiums are a little quieter than they had expected, than they had been led to believe. That is what the Premier League does better than anyone, certainly in soccer and possibly in any sport: spectacle.

The coronavirus pandemic has, of course, wiped out all of that. At Anfield on Monday night, the two teams appeared on the field in complete silence: no light show, as there is at Wolves, no announcement, not even any walk-on music. They were just, all of a sudden, there. The stadiums are empty. The stands are quiet. The spectacle has evaporated.

And yet, even in those bleak circumstances, the Premier League could not have asked for a better start to the season if it had commanded it by decree. The teams tasked with trudging through this uncanny valley seem to have taken it upon themselves to ensure the product shines even without its packaging. They have, in the most positive sense possible, made a spectacle of themselves.

The frenzy of the opening three weeks of the season has included, but is not limited to: Manchester United winning a game with a penalty awarded after the full-time whistle had blown; Manchester City conceding three penalties in the same game; a wholesale existential crisis about the meaning and worth of sport as a concept brought about by a change in the handball rule; and, most of all, goals, goals scored in industrial quantities, goals coming in floods and bunches and gluts.

In 28 games so far, there have been 103 of them, an average of 3.67 per fixture, far beyond the Premier League’s historic standard (as well as the general level of most major European leagues).

The second round of matches brought the highest scoring weekend the Premier League had ever seen: 44 goals in 10 games, including 5-2 wins for Everton and Tottenham and a 4-3 win for Leeds United. The third round hooked into the same vein: Manchester United beat Brighton, 3-2; Chelsea drew, 3-3, at West Bromwich Albion; Leicester scored five at Manchester City.

In that context, it is small wonder that a brief miscommunication — one that is really not worth explaining — between Klopp and Roy Keane, the fearsome former Manchester United captain turned compulsively forthright pundit, was the most compelling talking point to emerge from Anfield. Liverpool 3, Arsenal 1 no longer really cuts it.

Quite where this mania comes from remains inherently mysterious. The theory that has gained the most traction is that, because teams had such a short preseason, they are effectively shaking off their ring rust in competitive games, rather than in half-paced showcases against Real Madrid in the Rose Bowl.

Klopp, for one, does not give that a huge amount of credence; as he pointed out, just after his exchange of views with Keane, Everton had a short break, too, has acquired a whole new midfield, and has hit the ground running. But it is only as flawed as most of the alternatives.

They are, variously, that the compressed schedule, including a seemingly interminable odyssey through the early rounds of the Carabao Cup, means coaches have less preparation time; that teams are less likely to chase lost causes as they seek to conserve energy in a frenetic season; that the change in the handball rule has introduced an element of chaos, as manifested in the endless penalties awarded for innocuous offenses; that attacking players feel a little more free, though nobody would dare admit it, without the pressure of a pulsing crowd.

The sample size, of course, is still far too small to be meaningful. The overwhelming likelihood is — not far off a certainty, in fact — that the scoring rate will regress to the mean. As Marcelo Bielsa, the Leeds manager, put it, it will not be “a constant” through the season. (He has benefited, too: His forward, Patrick Bamford, long criticized for his profligacy in front of goal in the second-tier Championship, has three goals in three games.)

It is possible, though, that this start is a hint at, or a consequence of, some greater shift in the nature of the Premier League. In a league where the middle ranks were once the almost exclusive preserve of pragmatists like Sam Allardyce, they are now stuffed with dogmatists like Bielsa, the Southampton manager Ralph Hassenhüttl and Leicester’s Brendan Rodgers.

Increasingly, the Premier League has taken on the air of the Bundesliga, where high-risk, high-reward pressing is de rigueur, and where — in all but a handful of cases — teams go into games not looking to limit damage but to inflict it.

Whatever it is, even if it is an illusion, the Premier League will hope it holds for as long as possible: that even if it is not quite true, it was not necessarily a lie. Those goals, that sense of abandon, are what is sustaining the Premier League just when it most required intervention. Once order is restored, the silence of the stands will weigh far heavier, a long, bleak winter ahead. In the wildness, there is salvation. In the wildness, there is spectacle.