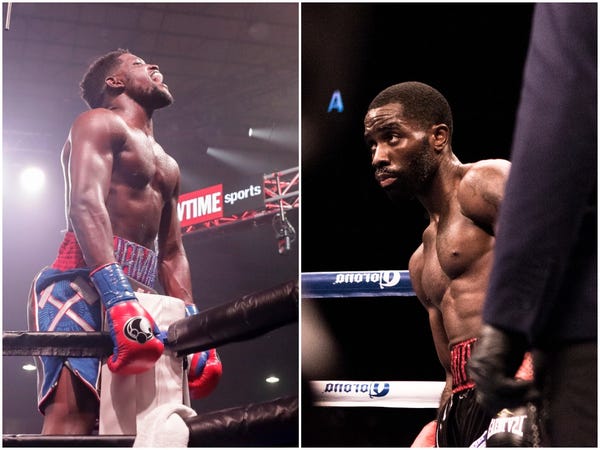 A powerful right hand landed on the chin half a minute before the end of the first round in a 2017 bout was all that was needed for Erickson Lubin to fall to the floor, beaten and concussed.

From there, the referee Harvey Dock began to count but really there was little point.

Lubin's body was stiff, his arms were outstretched, and with a fighter's instinct he tried to get up from the canvas but was so weakened it took him multiple attempts to rise from his side.

Dock waved the bout off long before he got to 10.

It was all over.

Jermell Charlo had destroyed him in the very first round and celebrated rambunctiously around the ring while Lubin was carefully guided to his stool so he could continue his recovery.

Boxing is a grueling, merciless, and unforgiving sport when you lose.

But it is brilliant and wonderful, adrenaline-fueled fun should you win.

Charlo went on to complete three total consecutive title defenses of his WBC super welterweight championship. He lost the belt to Tony Harrison in 2018 before reclaiming it with a stoppage one year later.

Now his star has never seemed brighter as he tops a dual pay-per-view on Showtime on September 26 — boxing's biggest event of the pandemic era so far.

One might think Lubin was cast to the side, chewed up and spat out by boxing's occasional unforgiving side, but nothing could be further from the truth as the reality is he is not that far behind Charlo.

Lubin has done one key thing since that 2017 beatdown — he has stayed busy, winning fight after fight.

One week before the huge Charlo doubleheader at the Mohegan Sun Arena in Uncasville, Connecticut, Lubin takes on Terrell Gausha in the same behind-closed-doors venue, in a fight aired by the same broadcaster — Showtime.

"A lot of the attention is on the big doubleheader pay-per-view, the Charlos event. That always happens if you've got a fight card [like that]," Stephen Espinoza, the president of Showtime Sports, told Insider this week.

"But Lubin and Gausha is a really interesting fight and, lost on this whole thing is that, with a win, Lubin becomes the mandatory [title challenger] to the winner of the Jermell vs. Jeison Rosario fight.

"So we have some connection between those two events and that was obviously intentional," Espinoza said.

Climbing the mountain, falling, then climbing it again

Espinoza told us he's inspired by the journey Lubin has been treading.

"To see Lubin's journey to get to the top once and to have that dramatic, shocking loss to Jermell seconds into the fight, then to watch him climb the mountain again and get to that point … it's really inspiring and you really have to pull for the kid — really talented."

Espinoza said Lubin's career could go on to replicate the two-weight world champion Badou Jack's, a Mayweather Promotions athlete who competes in the light heavyweight division after a campaign at super middleweight.

The first blemish on Jack's resume was a first-round knockout loss to Derek Edwards in 2014.

However, Jack regrouped and after two wins he challenged Anthony Dirrell for the WBC super middleweight championship, beating the American by decision.

"It's something that happens a lot in boxing," Espinoza said, regarding the first loss of Lubin's career three years ago. "We've seen it before and it reminds me of Badou Jack, who had an even more shocking knockout loss in a relatively early fight but he came back and became a world champion."

"I firmly believe that Erickson has the determination and talent to start from scratch and be a world champion," he said.

Lubin is slated to fight Gausha in the main event of a Premier Boxing Champions card broadcast on Showtime on Saturday, September 19.

Other bouts on the card include the American 23-year-old Jaron "Boots" Ennis' welterweight match against Juan Carlos Abreu, and a featherweight ruckus between Tugstsogt Nyambayar and Cobia Breedy.