TAMPA, Fla. — As the Yankees were going through tough negotiations with their longtime star Derek Jeter in 2010, team officials held a meeting with Jeter’s side.

Jeter was 36 and his skills were declining, but he believed he deserved more than the three-year, $51 million deal he ultimately signed. During a heated exchange with Yankees General Manager Brian Cashman that was later detailed in a Sports Illustrated article, Jeter asked Cashman which shortstops he would rather have.

One player Cashman listed: Troy Tulowitzki, who, nine years later, will indeed be patrolling shortstop for the Yankees on opening day.

“I remember the story,” said Tulowitzki, now 34, after a recent spring training workout. “I heard it. But it is what it is. You see a G.M. trying to do his job. At the time, I was going pretty good.”

He certainly was, but so much has happened since.

Jeter, of course, retired after the 2014 season, and is now a part owner and chief executive of the Miami Marlins. He was replaced at shortstop by Didi Gregorius, who has grown into a standout at the position.

Tulowitzki is not the same player he was in 2010, when he was with the Colorado Rockies and was considered one of the players in baseball because of his play at the plate and in the field. It was the first of his five All-Star seasons.

But a long list of injuries hampered a large chunk of Tulowitzki’s prime years. From 2010 to 2017, Tulowitzki averaged just 107 games a season.

The last two years have been more trying: Because of a fractured right ankle in 2017 and surgery to remove bone spurs from both heels in 2018, Tulowitzki’s last major league game was July 28, 2017.

“It took its toll,” he said. “But I’m still here standing and feel good. I can’t wait to prove myself.”

Tulowitzki has played with an edge his whole career. And he speaks his mind, as he did after the Rockies surprised him with a blockbuster trade to the Blue Jays in 2015, or after facing Toronto, which released him this off-season because they thought it was unlikely he would be a healthy, above-average shortstop again.

Tulowitzki hit a home run in his first spring training at-bat as a Yankee on Feb. 25, against the Blue Jays no less, and screamed toward his old team’s dugout while rounding the bases.

“That was the biggest spring training homer I’ve ever hit,” he said then with a smile. “Anybody who tells you you’re done, you’re gonna have some little extra fire.”

That excitement has since faded against the harsh reality that Tulowitzki has not faced major league pitching in a long time. It is just spring training, but Tulowitzki is 5 for 22 with two home runs and 10 strikeouts. Yankees Manager Aaron Boone still maintains confidence that Tulowitzki’s timing will come around. 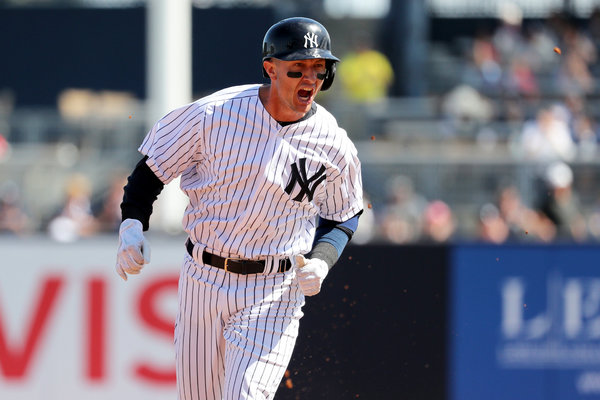 Tulowitzki’s path to the Yankees and his connection to Jeter through Gregorius makes for a long, winding story: Had Gregorius’s right elbow ligament not torn last fall and required Tommy John surgery, Tulowitzki would not be here; had the Blue Jays not released Tulowitzki in December after several frustrating seasons, the Yankees would have pursued other options on the trade or free-agent markets, or leaned more heavily on Gleyber Torres, a Yankees second baseman last year, at shortstop.

But the ligament did tear and Toronto did release him, so now, nearly a decade after Cashman said Tulowitzki’s name to Jeter’s face, Tulowitzki is here.

“I want a respectful and honest relationship with our players,” Cashman said, adding later: “The answer I provided back then was an answer to an ‘If you had access to everything and could do anything’ question. It’s not disrespectful. But at that time, Troy was well recognized as the best shortstop in the game.”

That was not the case this off-season. Soon after the Blue Jays released Tulowitzki with $38 million remaining on his contract, Tulowitzki’s agent Paul Cohen arranged a workout on Dec. 18. It was at Long Beach State University, where Tulowitzki once starred, and more than a dozen teams attended, including the Yankees.

Video of the session captivated Cashman, who called Cohen to request an additional private workout.Three days later, Tulowitzki, who had the Yankees on his list of preferred teams, was taking ground balls in front of two top Yankees scouts. The entire front office later viewed the more extensive videos of a healthy Tulowitzki moving with ease.

“After that, we were all in,” Cashman said.

But there was competition. Because of a 40-game suspension to shortstop Addison Russell, the Chicago Cubs aggressively pursued Tulowitzki. So did the Los Angeles Angels, who liked Tulowitzki for third base. Others eyed Tulowitzki for second.

Ultimately, even though Gregorius is expected to return at some point this summer, Tulowitzki chose the Yankees.

“I’ve done a lot of things in my career, and I’ve been close but haven’t won a ring,” said Tulowitzki, who has played in the playoffs four times, including a 2007 World Series sweep by the Boston Red Sox. “It was strictly on that. That’s what I’m excited for.”

The negotiations were easy. Because the Blue Jays were on the hook for Tulowitzki’s millions, the Yankees needed to offer only the major league minimum, $555,000. All that Tulowitzki wanted on top of that: a no-trade clause, unusual for a one-year deal of that amount.

“I want to be here and be here the whole time,” he said.

The Yankees have eased Tulowitzki through spring training, with regular days off each week for his legs, and plan to do the same during the regular season. Torres will play shortstop during those days. And whenever Gregorius returns, the Yankees will have more to juggle.

“He looks like he’s just being athletic and being himself,” said Yankees infielder D J LeMahieu said of Tulowitzki, who was also his teammate in Colorado. “He looks really good to me.”

Tulowitzki is undoubtedly motivated to prove the Blue Jays wrong — as well as those who thought he would never play again after his injuries. He said he wanted to show that older players could overcome hard times and still contribute.

But what guided him more than anything during the long, repetitive days of rehabilitation was his 5-year-old son, Taz, who does not remember seeing his father play in the major leagues two years ago.

“To get back out there and have him see me again was what I thought about each and every day,” Tulowitzki said.

Beginning on March 28, Tulowitzki will have the chance. When he was growing up in California, Tulowitzki watched the Yankees and later wore the same No. 2 jersey number because of his deep admiration for a player that feels relevant now: Jeter.