The Riveters dealt with predawn alarms; being momentarily stranded in Charlotte, N.C.; and losing most of their equipment. The game, against the Minnesota Whitecaps in St. Paul, scheduled for last Sunday, was postponed. The semifinal will now be played Friday night in St. Paul, with the Isobel Cup final scheduled for two days later at the same rink.

The N.W.H.L., in its fourth season, has had travel-and weather-related postponements before, as have other professional leagues like the W.N.B.A. Despite partnerships with four N.H.L. franchises, N.W.H.L. teams still travel with budgetary and time constraints.

Some Riveters players who expected to play last Sunday will not be available for the rescheduled game because they cannot take the day off from their full-time jobs.

Kelsey Koelzer, a star on defense for the Riveters, is one of those casualties in the tough financial landscape still facing pro women’s hockey. This year, N.W.H.L. salaries range from $3,000 to $10,000. 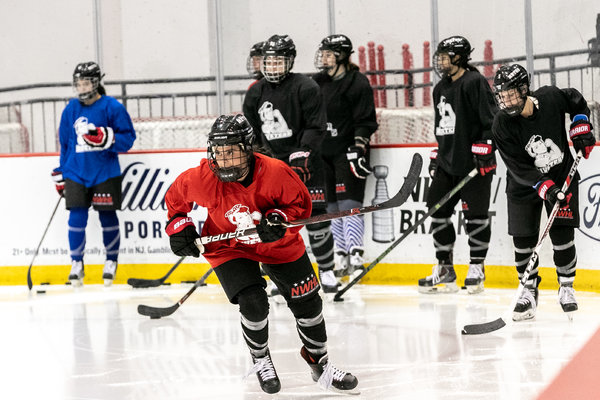 “It’s very frustrating,” Koelzer said after practice Tuesday night, beginning to choke up. “You work hard the whole season. You dedicate so much of your time. I’ve done my absolute best to get to every game possible. To reflect and think my season is potentially over and I didn’t even know that the last game I was going to play this season was my last game, it’s frustrating. It’s sad.”

Other sacrifices were made for this unusual weekend of women’s hockey in Minnesota. The Buffalo Beauts, the No. 2 seed, gave up the right to possibly host the championship game against the Riveters. The Beauts were 8-0 at their home rink this season.

Last Saturday, the majority of the Riveters were scheduled on a 2:53 p.m. flight to Minneapolis-St. Paul International Airport from La Guardia Airport. The team arrived at the airport two hours before takeoff, but because of wintry weather in the Midwest, the flight was canceled.

Anya Battaglino, the director of the N.W.H.L. players’ association, then began working with the league on other options.

An early Sunday morning flight from John F. Kennedy International Airport to Minneapolis, with a connection in Charlotte, was the most feasible option. Because of daylight saving time, players woke up around 1:30 a.m. to ensure no preboarding snafus. They boarded the plane just past 5 a.m., but it had to be de-iced. An hour later, the team still had not taken off, and began worrying about making its connection and reaching the arena for the opening face-off at 1:30 p.m. Central time.

The Riveters landed in Charlotte around 8:02 a.m., missing their 7:40 a.m. connecting flight. About an hour later, the league announced the game was postponed.

“We were all so delirious and hungry and tired, I think everybody was kind of relieved,” Riveters forward Miye D’Oench said. “Up until that moment, we were still sort of trying to stay in a game-day mind-set. It got harder to do as the day went on and more things went wrong.”

The Riveters touched back down in Queens early Sunday afternoon, only to learn most of their equipment and personal bags were headed to Minnesota.

That was not the only headache. Battaglino, the league office and players on the Riveters, the Whitecaps and the Beauts, who won their semifinal matchup against the Boston Pride on Saturday, had to figure out when and where to hold a makeup game.

A Saturday semifinal and Sunday final was proposed, but some players worried about playing on consecutive days. In addition, the University of Minnesota’s women’s hockey team, a huge draw locally, has an N.C.A.A. tournament game against Princeton on Saturday. Travel for the Riveters and the Beauts also had to be considered.

Eventually, a vote on Monday morning led to the Friday/Sunday setup. But that did not alleviate all concerns. While a majority of the Riveters were to fly out Thursday night (with no serious inclement weather in the forecast), Battaglino said seven players or staff members would travel separately from the team to better accommodate their schedules.

Some members of the Riveters, the defending champions, see the travel problems as a possible advantage against the top-seeded Whitecaps.

“Last weekend’s travel woes were very extreme, and I think it brought us closer as a team,” D’Oench said. “In a certain sense, sometimes going through a lot of adversity can sometimes play to a team’s advantage, and we’ve certainly had no shortage of adversity this season.”

Battaglino said last weekend’s “fire drill” would be a learning experience and help influence future scheduling. The league openly discussed their decision-making process in a letter to fans.

Koelzer said if the Riveters won Friday, she would look into getting to Minnesota for Sunday’s final. Now well-rested, many of the Riveters are confident they can defeat the Whitecaps, whom they were 0-4 against this season.

But Kimberly Sass, a backup goaltender for the Riveters who documented last weekend’s travel woes on social media, is starting a new full-time job and cannot afford to take Friday off.

On Tuesday, she wrote on Twitter that she hoped that in the future, “female professional athletes will never be faced with the decision to attend a game, or risk ruining a professional reputation at their non-sport place of employment.”