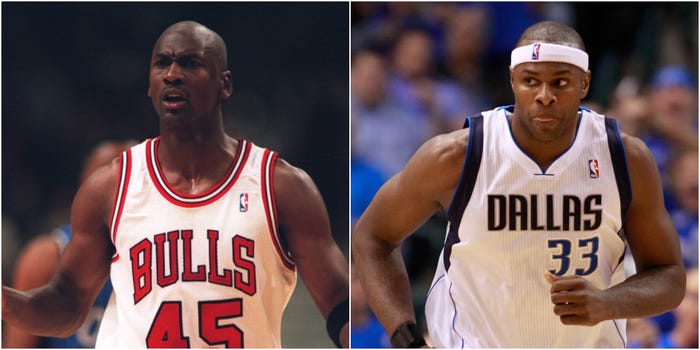 Brendan Haywood, one of only a handful of players to play with both Michael Jordan and LeBron James in the NBA, has revealed why he believes the Jumpman is still the greatest of all time.

Haywood played alongside Jordan at the Washington Wizards between 2001 and 2003, before later joining up with James at the Cleveland Cavaliers for the 2014/15 season.

He is one of only four players to play with both James and Jordan, along with Scott Williams, Larry Hughes, and Jerry Stackhouse.

What set Jordan apart from James, Haywood said, was his sheer ruthlessness on the court.

"Mike wanted to cut your heart out. He wanted you to fear him. Mike wanted, defensively and offensively, to dominate you. That's where they are different," Haywood told Hoops Hype of his two former teammates.

"Michael has had a nastiness and ferocity to his game that LeBron may not possess. LeBron will try to beat you. He definitely wants to beat you," Haywood said.

"But MJ wants to beat you in a way where you will be embarrassed to go on a ride home with your spouse after the game."

Haywood added: "[Jordan] wanted to talk trash to you. He wanted to let you know that you couldn't guard him. Some of the days in practice, what MJ was saying to Byron Russell were just flat-out embarrassing. He would just go after this guy! It wasn't like he didn't like him. It's just how he was."

"One day, MJ was cooking [Russell] and he pulled up and hit a game-winner. He said: 'That's why they call you the human highlight reel. Not because you have any highlights of your own but because you are in all of mine.'

"That's GOAT trash talk. That shut it down."

Haywood also revealed how once turned down a personal invitation from James to move to Cleveland prior to 2014, however declined because he didn't want to take a pay cut.

"When I was in Dallas, LeBron was thinking about going to Miami. Before he went to the Heat, he was recruiting guys to come to Cleveland," he said.

"I get a text from a number that I don't know. It's LeBron. He says: 'What's up, this is King James.' It was a little weird he called himself King James but I kept going.

"He told me he was trying to get guys to come to the Cavs. He said he knew that they could not give me what I was going to get in the market. But he wanted to know if I would be willing to take a pay cut to be a part of something special.

"I wouldn't have taken a pay cut to play with the '92 Bulls. I hadn't made enough money in my career to take a pay cut and chase a championship."