AUGUSTA, Ga. –  The day that many in sports thought would never happen just did. In a sports comeback for the ages, nearly 11 years after he won his last major championship, 43-year-old Tiger Woods has won another. For the fifth time in his career, and the first time in 14 years, Woods has won the Masters.

How fitting it was that Woods, who has endured personal scandal and four surgeries on his back, including spinal fusion two years ago, ended his drought here at the Masters, the first major tournament he won 22 years ago.

That day, he fell into his late father’s embrace as he walked off the 18th green. On this day, he was the father, walking into the waiting arms of his mother, his 11-year-old daughter, Sam, and his 10-year-old son, Charlie. The kids, both young athletes themselves, had never seen their father win a major championship, so he flew them in just for the final round, hoping it might happen. 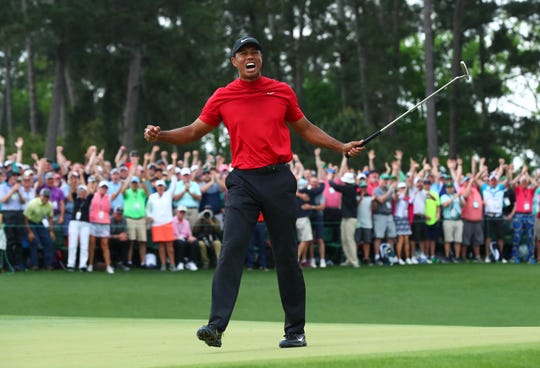 “They only knew golf caused me a lot of pain,” he said of his children. “I’m creating new memories for them. … To have my kids there, it’s come full circle. I think, I hope, they’re proud of their dad.”

Woods won this tournament as a wiser, chastened, more mature middle-aged man. The arrogant fist-pumping golfer who won four green jackets from 1997 to 2005 appears to be long gone, replaced by a balding father who was pleased to report he “plodded” his way around Augusta National Golf Club as his younger competitors all slowly fell away, leaving only him standing at the end.

In a telling statistic, Woods made neither one eagle nor one double bogey across four days of play. This was a victory of moderation, not extremes.

Asked how this one ranked among his now 15 major championships, Woods smiled.

“It’s gotta be right up there, right?” he said. “I was lucky enough and fortunate enough to do this again.”

A young Tiger Woods never would have said that last sentence. He was raised by his father to believe it was his birthright to win majors. But for this Tiger, accepting the gift of being able to compete again at the top of his game was enough.

Woods won this major championship the old-fashioned way: Just as he used to win them.

As he calmly chomped on his now-ever-present gum and endured whatever Augusta National threw at him on his way to a steady, two-under-par 70, his competitors – many of them young golfers who grew up watching and idolizing him – slowly fell by the wayside.

Not one, not two, not three but four of those in or near the lead hit shots into Rae’s Creek in front of the par-3 12th hole Sunday. What are the odds of that? One by one, they gave away their chance to win. It was as if the gods of golf had come down from the heavens and deemed that it was Tiger’s turn to win again.

As Woods navigated the carnage, he emerged with a back-nine lead he never relinquished, allowing him to have a safe and sweet walk up the packed 18th fairway to a victory he had for so long hoped would come.

As he made a no-frills bogey to win by one over a trio of younger stars, he hugged nearly everyone in his path and raised his arms in both relief and stunning triumph.

It was almost unbelievable that it had been less than two years since his alarming DUI mug shot, a year and a half since he said he couldn’t get off the couch to watch his kids play soccer – and nearly 10 years since his well-publicized, self-induced personal scandal. That seems like ancient history now, doesn't it?

If you still can’t believe he did this, you’re not alone. Woods agrees.

“I had serious doubts after what transpired a few years ago with the procedure on my back,” he said after the final round. “The body’s not the same as it was. I was just very lucky to be playing again. I was really struggling. To now be the champion, it’s just unreal for me to experience it.”