They are both boys from the tropics; one from Rockhampton, the other from a tiny town called Dingo, 90 minutes drive inland from the Central Queensland coast.

Yet even with their shared sense of place, Ben Hunt and Cameron Munster shape as the odd couple that have been handed the keys to the Maroons as they take their place for game one at the MCG next week. 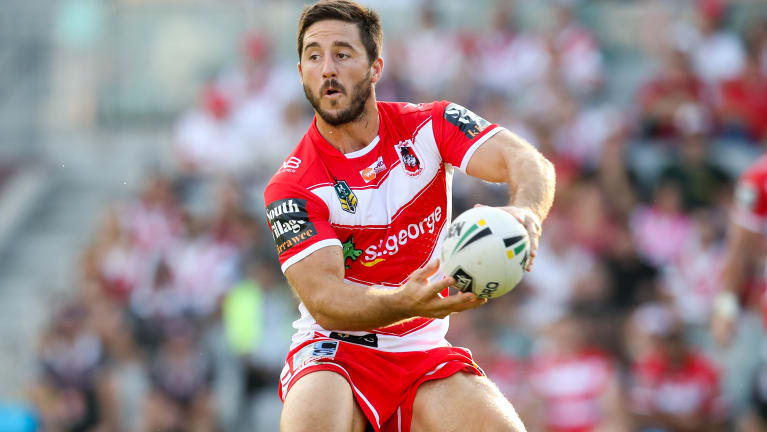 New era: Ben Hunt will make his starting debut for Queensland at halfback.

In what has been a foregone conclusion for weeks, Hunt and Munster were named at halfback and five-eighth for Queensland at their team reveal on Monday, with the former getting a starting debut and the latter reprising his starring role from game three last year.

Their more recent past has been widely reported. Munster was sent home from a Kangaroos camp in Darwin late last year after an alleged run-in with Hunt while on the drink. Hunt has played it down but for a while, at least, the duo were hardly thick as thieves.

That much change for them to be a success for Queensland and put their imprint on a side that has undergone rapid change through its key positions. Cameron Smith has gone, while Hunt and Munster wear jumpers donned by Johnathan Thurston, Cooper Cronk and Darren Lockyer through the decade of domination.

Hunt has been superb for St George Illawarra this season and chief selector Gene Miles said coach Kevin Walters had given him the same responsibility for Queensland.

"It will be basically Hunty's team and Kevvie has told him that," Miles said. "He's been doing a very good job for St George and his kicking game has vastly improved as well.

"But they [Hunt, Munster] have to step up … because there is no JT, no Cam or Cooper.

"That day was coming and here we are. They have all this in front of them. We hope they take their chance.

"The guys who retired had 100 or so Origin games and these guys are only in their early days but they can hopefully settle into those positions for the next six years or so."

Walters said he had yet to ring Daly Cherry-Evans, another halves candidate, but it's clear Hunt and Munster are viewed as the long-term custodians of the jerseys. Hunt will be the main organiser, while Munster will attack the line and service hard-running centres Greg Inglis and Will Chambers.

Walters has long been a fan of Hunt and felt he never fully fulfilled his talents in Brisbane before a move south to wear the Red V. A former Broncos assistant, Walters said Hunt had always aspired to be counted among the best playmakers in the NRL.

"He'll do a great job for Queensland. I really liked working with Ben at the Broncos, I could see the skill level and the desire in Ben to become a really good halfback," Walters said.

"We've seen that this year at the Dragons and I expect to see it at the next level for Queensland."

Hunt takes a corked leg into Origin camp and will likely be nursed through the first few training sessions.

But there are no fears about his fitness, according to the coach, even though he failed to finish the match against Penrith last Saturday.