Robert Covington remembers his college basketball practices. He remembers the two-on-one full-court drills where he was the “one” and had to try to defend two teammates. He remembers the endless games of one on one that more closely approximated cage matches. He remembers breaking curfew to sneak into the gym to work on his shot — and the late-night phone calls to his coaches when campus security caught him.

But most of all, Covington remembers feeling driven when he was at Tennessee State.

“I felt like I was overlooked my whole life,” he said.

Now in his eighth N.B.A. season, Covington starts at forward for the Portland Trail Blazers, who traded for him in November, banking on his ability to defend, plug holes, make jumpers and help bind the team. It has been a process — Covington has struggled with his shooting — but he continues to provide big minutes for a team that hopes to contend. Because of injuries, he has even moonlighted at center.

“We ask him to do a lot,” his teammate Carmelo Anthony said. “But he’s built for that.”

On Sunday, true to form, Covington will play an understated role in the preamble to the N.B.A. All-Star Game when he takes part in the league’s annual skills challenge.

Considering that teams have spent the past three months crisscrossing the country with the coronavirus still spreading, many players were not particularly enamored of the N.B.A.’s decision to stage an All-Star Game this season. Covington, though, wanted to go because the league and the players’ union are using Sunday’s festivities to help highlight and financially support historically Black colleges and universities. Covington, 30, is the only active player in the league who attended an H.B.C.U. — a distinction that he said was not lost on him.

“Of course, I would love to have a break just to get away and reset,” he said, “but I feel like it’s a life-changing experience, and it’s an opportunity I can’t pass up.”

In many ways, Covington said, his time at Tennessee State formed the foundation for a career he never envisioned, and he hopes his presence at All-Star weekend — however modest — is an example to young players who are unsung or overshadowed. 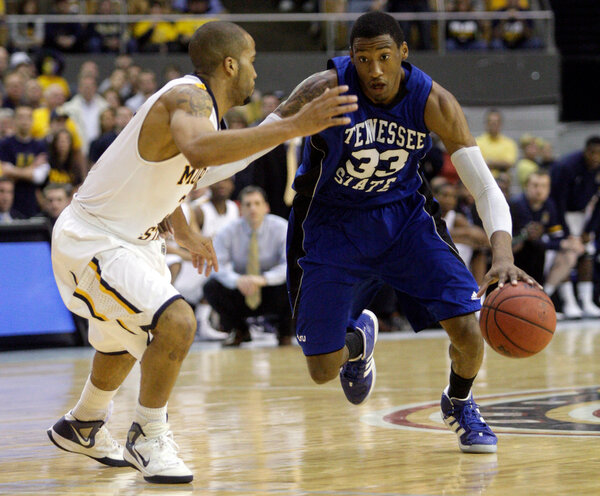 Covington was not a top-shelf recruit coming out of Proviso West High School in Hillside, Ill., outside Chicago. At 6 feet 7 inches and about 170 pounds, he had a thin frame and a hard-to-define game. His jump shot was alluring, but college coaches wondered whether he had the strength to bang around in the post. After all, that was where someone that tall ought to be playing: down low. But one coach expressed a great deal of interest, and that may have made all the difference.

At the time, Dana Ford was an assistant at Chipola College, a two-year school in Marianna, Fla. But he was also a candidate to join the staff at Tennessee State, a Division I university in Nashville, when he first saw Covington and was captivated by his potential.

“He was like, ‘I’m applying for this job, but until I get it I’m allowed to call you every day,’” Covington recalled Ford telling him. “So he called every day. I thought he was crazy at first.”

Ford soon landed the job as an assistant coach at Tennessee State — and curbed his phone calls — but not before he persuaded John Cooper, the team’s new head coach, to join him on a trip to Chicago to see Covington in a showcase for unsigned seniors. It did not go as planned: Fewer than 10 prospects participated, and Cooper could understand why coaches had concerns about Covington. (What position would he play?) But Cooper had scholarships available.

“The one thing you could tell is that he could shoot the ball,” Cooper, now an assistant at Southern Methodist University, said in a telephone interview. “So I told Dana, ‘Well, you know, the one thing for sure is that at his height, he’s a guy who if teams zone us, he can possibly make some shots.’”

For his part, Covington said he was sold on Tennessee State as soon as he arrived for his official visit.

“I called my parents before the first day was even over and said, ‘I found my school,’” he said. “It just felt right.”

When he enrolled, the N.B.A. was a distant fantasy. The more realistic goal, he said, was to eventually get paid to play basketball — somewhere, anywhere. Cooper said he was struck by Covington’s toughness. He was unafraid of contact, and even seemed to seek it. “He just needed some strength and size,” Cooper said.

Ahead of Covington’s freshman season, the coaching staff bulked him up by putting him on a weight lifting program — and by having him consume a box of Krispy Kreme doughnuts every day. (“I ate them in increments,” Covington said.) He added about 15 pounds in two weeks. Even now, he said, he has the sort of high metabolism that incinerates calories. He weighs about 228 pounds, he said, with 5.1 percent body fat.

As a four-year starter at Tennessee State, he did a bit of everything: scoring, rebounding, defending. He shot 42.2 percent from 3-point range, and opposing forwards struggled to contain him on the perimeter.

“I think one of the best things that ended up happening for Rob at T.S.U. is that he was never pigeonholed,” Cooper said. “Because of his ability, length and size, he did so many different things and his overall game was allowed to grow.”

After Covington went undrafted in 2013, the Houston Rockets offered him a partially guaranteed deal and assigned him to the Rio Grande Valley Vipers, their affiliate in the N.B.A. development league (now called the G League).

Covington’s presence happened to coincide with a grand experiment for the Vipers. The Rockets’ front office wanted the team to shoot a ton of 3-pointers and layups, treat midrange jumpers as if they were poisonous and switch on defense on every screen. The Vipers were also instructed to keep the paint open on offense by stationing five players around the perimeter. That might sound familiar to anyone who watched the Rockets during the Mike D’Antoni coaching era.

Back then, though, those concepts were fairly space age. No team in the N.B.A. had averaged more than 28.9 3-point attempts the previous season. The Vipers launched 45.4 3-pointers a game, and Nevada Smith, then the team’s coach, urged Covington to take his share of them. Covington thrived, averaging 23.2 points and 9.2 rebounds per game while shooting 37 percent from 3-point range. He had room for improvement, Smith said. He was not a terrific passer, and his ball-handling needed work.

“But the defense, the shooting, the anticipation and his ability to finish over the rim — you could see all that stuff from early on,” Smith said.

Covington’s place in the N.B.A. ecosystem was still far from secure, and after he played poorly for the Rockets in summer league ahead of the 2014-15 season, they waived him.

“They just didn’t see me as a part of their future at that point,” said Covington, who turned down what he described as a major offer from a team in China. “I didn’t want to get lost in the shuffle, so I took a gamble on myself.”

The Philadelphia 76ers soon signed him, and he flourished over four-plus seasons, along the way agreeing to a four-year contract extension worth about $62 million. He was named to the league’s all-defensive team in 2018. More than ever, the N.B.A. was valuing versatile players who could stretch the floor, players for whom the idea of being “positionless” was now considered an asset rather than a disadvantage.

After stints with the Minnesota Timberwolves and the Rockets (who traded for the player they had once cut), Covington joined the Blazers before the start of the season.

“It’s just about getting more and more comfortable in the offense,” said Covington, who scored a season-high 21 points on Monday in a win over the Charlotte Hornets. “Got to keep doing what I’m doing.”

He often thinks about the effect that Tennessee State had on him, his late nights in the gym, the coaches who pushed him and the program that believed in him. He recently donated $1 million for the university to build a new practice facility, which will be called Covington Pavilion. He has the blueprints.

“Surreal,” he said. “Something I never could have imagined.”